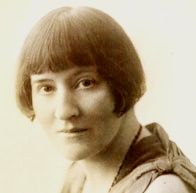 White started writing as a child and contributing essays and poems to children’s papers. She passed the Government Examination (Second Class) in freehand drawing at Newport School of Art in 1890. She found employment with the Ministry of Pensions, but eventually left that position to pursue her writing. Her publications made her one of the best known crime writers in Britain and the United States in the 1930s and 1940s. Her first three works, published between 1927 and 1930, were mainstream novels; her first crime novel, published in 1931, was Put Out the Light. White specialized in “woman in peril” / “had I but known” type psychological thrillers.  In her day she was as well known as writers like Dorothy L. Sayers and Agatha Christie; and after having fallen out of favor in the decades after WWII, her works have enjoyed a revival in recent years.

“Lost causes are the only causes worth fighting for.”