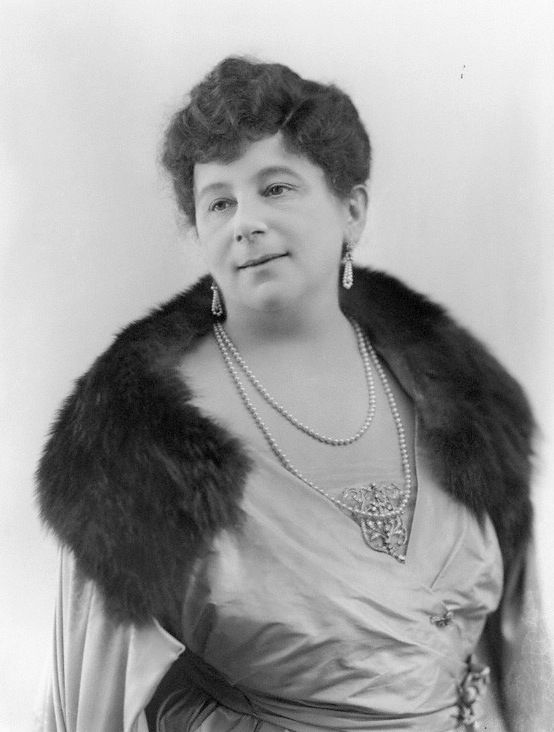 Baroness Emma Orczy (full name: Emma Magdolna Rozália Mária Jozefa Borbála Orczy de Orci) (Tarnaörs, Heves County, Hungary, September 23, 1865 – Henley-on-Thames, England, November 12, 1947), usually known as Baroness Orczy or Emmuska Orczy, was a Hungarian-born British novelist and playwright.  Her parents left their estate in 1868, three years after Emma’s birth; subsequently the family lived in Budapest, Brussels and Paris, before finally settling in London in 1880, when Emma was 14 years old.  Also a trained painter, Orczy celebrated her greatest success as a writer; she is best known for her series of novels featuring the Scarlet Pimpernel, the alter ego of Sir Percy Blakeney, a seemingly foppish wealthy English aristocrat, who turns into a quick-thinking escape artist in order to save French aristocrats from “Madame Guillotine” during the French Revolution, establishing the “hero with a secret identity” in popular culture.

Opening in London’s West End on 5 January 1905, the play version of The Scarlet Pimpernel became a favourite of British audiences. Some of Orczy’s paintings were exhibited at the Royal Academy in London. During World War I, she formed the Women of England’s Active Service League, an unofficial organisation aimed at encouraging women to persuade men to volunteer for active service in the armed forces.

Orczy also wrote mysteries (chiefly as short stories), most notably the Old Man in the Corner series, where an elderly curmudgeon solves crimes that are puzzling the police while sitting in the corner of an A.B.C. tea shop and discussing the cases with a young journalist named Polly Burton; as well as the Lady Molly of Scotland Yard mysteries, one of the earliest exponents of mysteries featuring a female protagonist able not only to hold her own against men but to routinely best them, and the Skin O’ My Tooth mysteries, focusing on the crime solving activities of a clever but somewhat disreputable defense lawyer.  Her mysteries were well enough received for her to be invited to be one of the founder members of the illustrious Detection Club, alongside, inter alia, G.K. Chesterton (the club’s first president), Agatha Christie, Dorothy L. Sayers, and Anthony Berkeley (the club’s initiator).

The Old Man in The Corner

“We seek him here, we seek him there
Those Frenchies seek him everywhere
Is he in heaven? — Is he in hell?
That demned, elusive Pimpernel”

“‘Money and titles may be hereditary,’ she would say, ‘but brains are not.””

“Virtue is like precious odours, most fragrant when it is crushed.”

“The present is not so glorious but that I should wish to dwell a little in the past.”

“A surging, seething, murmuring crowd of beings that are human only in name, for to the eye and ear they seem naught but savage creatures, animated by vile passions and by the lust of vengeance and of hate. The hour, some little time before sunset, and the place, the West Barricade, at the very spot where, a decade later, a proud tyrant raised an undying monument to the nation’s glory and his own vanity.”

“Mr. Hempseed shook his head with an infinity of wisdom, tempered by deeply-rooted mistrust of the British climate and the British Government.”

The League of the Scarlet Pimpernel

“The evil we do, Monsieur, is within us; it does not come from circumstance.”

“Honor, my good Armand, is often cruel and seldom human. He is a godlike taskmaster, and we who call ourselves men are all of us his slaves.”

A Child of the Revolution

“No man who has played a role on the world stage has ever been without his detractors, and only a few have been without their apologists.”

The Old Man in the Corner

“Now, in this case, if John Ashley had indeed committed the murder in Regent’s Park in the manner suggested by the police, he would have been a criminal in more senses than one, for idiocy of that kind is to my mind worse than many crimes.”

Find more quotes by Emmuska Orczy on Wikiquote and Goodreads.