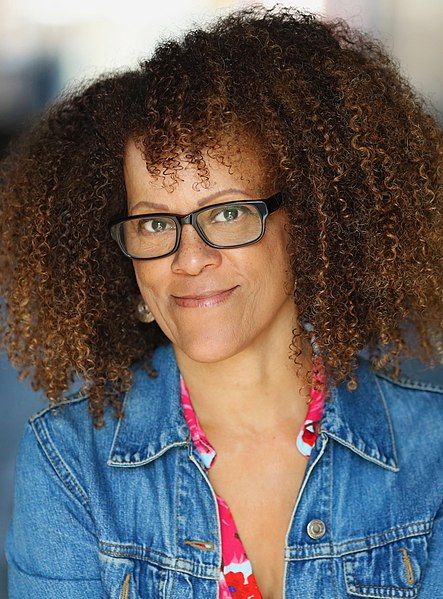 Bernardine Anne Mobolaji Evaristo, OBE FRSL FRSA (born London, UK, May 28, 1959), is a British author and academic. Her eighth book, the novel, Girl, Woman, Other, won the Booker Prize in 2019, making her the first black woman and the first black British person to win it. In 2020 she won the British Book Awards: Fiction Book of the Year and Author of the Year, as well as the Indie Book Award for Fiction as well as many other awards. The novel was one of Barack Obama’s 19 Favourite Books of 2019 and Roxane Gay’s Favourite Book of 2019. In June 2020 she became the first woman of colour and the first black British writer to get to number 1 in the UK paperback fiction charts, where she held the top spot for five weeks. There are over 50 foreign language translations of Evaristo’s books in process. Evaristo’s writing also includes short fiction, drama, poetry, essays, literary criticism, and projects for stage and radio. Two of her books, The Emperor’s Babe (2001) and Hello Mum (2010), have been adapted into BBC Radio 4 dramas. Her ninth book, Manifesto: On Never Giving Up is published by Penguin UK October 2021 and Grove Atlantic USA (2022).

Evaristo is a longstanding advocate for the inclusion of writers and artists of colour, setting up many successful projects. She founded the Brunel International African Poetry Prize (2012–present) and initiated The Complete Works poetry mentoring scheme (2007–2017). She co-founded Spread the Word writer development agency (1995–present) and Britain’s first black women’s theatre company (1982–1988), Theatre of Black Women. She organised Britain’s first major black theatre conference, Future Histories, for the Black Theatre Forum, (1995) at the Royal Festival Hall, and Britain’s first major conference on black British writing, Tracing Paper (1997) at the Museum of London. In October 2020 it was announced that she is curating a new book series with Hamish Hamilton at Penguin Random House publishers, “Black Britain: Writing Back”, which involves bringing back into print and circulation books from the past. The first six books, novels, were published in February 2021, including Minty Alley (1936) by C. L. R. James and The Dancing Face (1997) by Mike Phillips.

Evaristo is Professor of Creative Writing at Brunel University London, one of fewer than 30 black female professors in the UK out of around 20,000 professors overall. She was Vice-Chair of the Royal Society of Literature until 2020, when she became a lifetime Vice President. She is a lifetime Honorary Fellow of St Anne’s College, University of Oxford and International Honorary Fellow of the American Academy of Arts & Sciences. In 2021 she succeeded Sir Richard Eyre as President of Rose Bruford College of Theatre and Performance, her alma mater and one of Britain’s major drama schools. She was appointed a Member of the Order of the British Empire (MBE) in the Queen’s 2009 Birthday Honours, and an Officer of the Order of the British Empire (OBE) in the Queen’s 2020 Birthday Honours, both for services to literature.

“Be a person with knowledge not just opinions.”

“Privilege is about context and circumstance.”

“Life is an adventure to be embraced with an open mind and loving heart.”

“Let us wonder at how X was just a rare letter until algebra came along and made it something special that can be unravelled to reveal inner value.”

“People have to share everything they do these days, from meals, to nights out, to selfies of themselves half naked in a mirror
The borders between public and private are dissolving.”

“The Barbies with their stick legs and rocket breasts were another problem Megan had to endure. She was supposed to spend hours dressing up or playing house with them, including the darker ones she was supposed to find more relatable. In a fit she’d once tried to commit Barbicide, defaced them with colored marker pens, chopped off hair, extracted eyes with scissors and de-limbed a few … The Barbie invasion proliferated on birthdays and at Christmas, relatives talked about incredible collection, as if she’d actually chosen to have them in her life.”

“There was no such thing as objective truth and if you think something’s good because it speaks to you it is.”

“Why should he carry the burden of representation when it will only hold him back?
White people are only required to represent themselves, not an entire race.”

“Life is about taking risks, not about burying your head in the sand.”

“We should celebrate that many more women are reconfiguring feminism and that grassroots activism is spreading like wildfire and millions of women are waking up to the possibility of taking ownership of our world as fully-entitled human beings
How can we argue with that?”

“It took her years to realise she wasn’t being slow and stupid, she leaned the hard way to shoehorn herself into debates, to force them to explain exactly what the hell they were talking about, to hold them to account.”

“She realized that knowing someone comes from money isn’t the same as witnessing the extent of it in close proximity.”

“Megan should have been grateful and accepted her cute status, what girl doesn’t want to be told how lovely she is, how special? except it felt wrong, even at a young age, something in her realized that her prettiness was supposed to make her compliant, and when she wasn’t, when she rebelled, she was letting down all those invested in her being adorable.”

“I’m not a victim, don’t ever treat me like a victim, my mother didn’t raise me to be a victim.”

“Who needs enemies when your life partner undermines you on a regular basis?”

“I am an individual, specific, not generic.”

“He turns to me, serious, grabs my wrist tight.
“”What am I now? A Catholic priest you got to confess all of your sins to? If you start down that road, I got to reciprocate, and I ain’t so sure you can handle that. You want to know where this conversation will lead, my friend? A dead end, that’s where.
‘Listen to me good, Barry. I have known you since 1947 when we was nippers. That’s sixty-four years, yuh hear? You and me has finally got a future to look forward to together, so let we not go digging up our past misdemeanors, right? Just sit back comfy and easy and listen to the one and only Miss Shirley Bassey and let we just enjoy the vibes, man, enjoy the vibes.'”

Find more quotes by Bernardine Evaristo on Wikiquote and Goodreads.