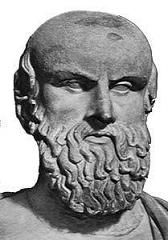 Aischylos (or Aeschylus; Greek: Αἰσχύλος, Aiskhulos; Eleusis, Greece c. 525/524 BC – Gela, Sicily [today: Italy], c. 456/455 BC) was the first of the three ancient Greek tragedians whose plays can still be read or performed, the others being Sophocles and Euripides. He is often described as the father of tragedy: Our knowledge of the genre begins with his work and our understanding of earlier tragedies is largely based on inferences from his surviving plays. According to Aristotle, he expanded the number of characters in plays to allow for conflict amongst them, whereas previously characters had interacted only with the chorus.

Only seven of his estimated seventy to ninety plays have survived into modern times, and there is a longstanding debate about his authorship of one of these plays, Prometheus Bound. Fragments of some other plays have survived in quotes and more continue to be discovered on Egyptian papyrus, often giving us surprising insights into his work. He was probably the first dramatist to present plays as a trilogy and his Oresteia is the only ancient example of the form to have survived.

At least one of his works was influenced by the Persian invasion of Greece, which took place during his lifetime. This play, The Persians, is the only extant classical Greek tragedy concerned with recent history (very few of that kind were ever written) and it is a useful source of information about that period. So important was the war to Aeschylus and the Greeks that, upon his death, around 456 BC, his epitaph commemorated his participation in the Greek victory at Marathon rather than his success as a playwright.

He was a deep, religious thinker. Few poets have ever presented evil in such stark and tragic terms yet he had an exalted view of Zeus, whom he celebrated with a grand simplicity reminiscent of the Psalms, and a faith in progress or the healing power of time.

Read more about Aischylos on Wikipedia.

“There is no avoidance in delay.”

“ATHENA: There are two sides to this dispute. I’ve heard only one half the argument. (…) So you two parties, summon your witnesses, set out your proofs, with sworn evidence to back your stories. Once I’ve picked the finest men in Athens, I’ll return. They’ll rule fairly in this case, bound by a sworn oath to act with justice.”

“For somehow this is tyranny’s disease, to trust no friends.”

The Seven Against Thebes

“His resolve is not to seem, but to be, the best.”

Find more quotes by Aischylos on Wikiquote and Goodreads.