Zahra Hankir & Various Authors: Our Women on the Ground: Essays by Arab Women Reporting from the Arab World 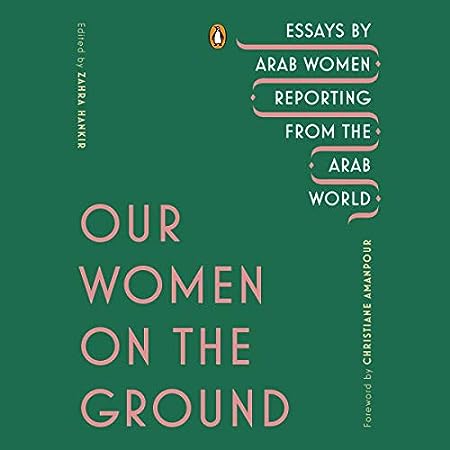 One of the last books I read in the first quarter of 2021 was, at the same time, also one of my reading highlights to date — and next to the likes of Barack Obama, Kamala Harris, Zora Neale Hurston and Toni Morrison (as well as Agatha Christie’s multiple appearances in the area of mysteries), that is truly saying something. Our Women on the Ground is a collection of autobiographical — indeed, highly personal — essays by women reporters from various parts of one the world’s most fractious and fragile regions, the Middle East and North Africa: Syria, Iraq, Palestinian Territories, Lebanon, Egypt, Libya, Sudan, Yemen and, yes, even Saudi Arabia; and it simply blew me away.  Not only because even going in, I had realized how little I really knew about Middle Eastern women’s lives (which was why I had wanted to read this book to begin with, after all) — but because words just cannot describe the amount of respect that these women, and their sisters in the Middle East and Arab world generally, deserve.

There is a widespread perception of Middle Eastern women as either victims of an overbearing male-dominated society, doomed to passivity and submission, or, if they have freed themselves from the yoke, as rebels fighting for the feminist ideal that the Western Women’s Lib generation has made its own once and for all ever since the 1960s.  The reality is, of course, infinitely more complex; and it utterly defies simple, one-size-fits-all answers.  Lina Attalah, editor of a Cairo-based news website (Mada Masr — “Egyptian Matter(s)”), in an essay framed as the letter to her deceased father that she found herself unable to write during his lifetime, captures the issue from her personal perspective like this:

“Women in Egypt, as well as in other Arab and Middle Eastern countries, are often depicted by the Western world as nothing but victims of patriarchy.  Through the privilege of social status, and, more specifically, my family’s middle-class insistence to invest in a good-quality education (in other words, a French school and an American university), I had direct access to that Western world.  I worked in English, the lingua franca of the globe.  I became an extension of the object of the typical Western gaze in that context, albeit an exciting extension because of the irregularities I represented: I was an Arab woman whose activism was visible to the public, against the odds of the prevalent conservatism and patriarchy associated with the region.  Speaking and writing invitations on the back of my gender started rolling in one after another. […]

These invitations often made me feel trapped in place, identity, and body.  I felt as though a form of bourgeois or liberal feminism was being imposed upon me and I had to constantly free myself from it.  I almost never had something smart to say as an answer to that nagging question: What is it like to be a woman journalist in Egypt nowadays?  I didn’t want to recount stories of sexism, patriarchy, and oppression that would feed into commonplace Orientalist essentialism and render me a heroic survivor.  Nor did I want to engage in a short-sighted defense of th Arab.  But I had no third story to tell, no nuanced explanation of how we live a life of public engagement through the lens of gender. […]

My tongue spoke a lingua franca, but my mind was refusing to speak its dominant mind-set, which tends to represent the society I come from as static.”

Each of the contributors to this book had to find her own individual path, and none of the “third stories” they tell as a result is even remotely like any of the others.  None of these women is content with the shorthand quip “Well, I’m not a male journalist, so I can’t compare” as an answer to the “nagging question” mentioned by Lina Attalah in the passage quoted above (though said quip does seem to be a handy and not uncommon replacement for “f*ck off” if annoyed by that “nagging question”, if another essay is to be believed).  Most of them were born and have grown up in the Middle East; some however, while of Middle Eastern descent, have grown up in the West and returned to the region as grown-ups.  Some, but not all of them bow to the demands of the societies in which they live, or used to live during the times about which they write: Few had (or have) to go so far as to balance the freedom required for doing their job with the extreme limitations of wearing a burqa, confining their activities to the daytime hours, and / or moving around outside their house only with a mahram (literally, “an acceptable escort”, i.e. a male protector, who has to be close blood relative), whose absence may cause them to be arrested for contravening Islamic law, as may the choice of a fake mahram, which will instantly also subject both of them to the gravest charges of indecency — and yet, that is a risk they routinely incur in pursuance of their job.  (And if these are restrictions that make a reporter’s life hard even under ordinary circumstances — as they do — imagine how much more crippling they must be when reporting from a war zone!)  Others, by contrast, refuse entirely to (e.g.) cover their hair; one of the anthologies’ contributors was all of 15 years old when she took this stance in defiance of her entire family, rejecting “all the women in our town do” as a good enough reason to follow precedent.  Some eventually had to accept various forms of compromise (headscarf, long dark coat) or made their peace with the hijab in the interests of their job.  Many of these women, even those who went to university with their families’ consent, have encountered the sharp opposition of their nearest and dearest for their choice of profession.  (“We wanted you to have a decent education, but we didn’t mean you to do that with it, you ungrateful wretch!”)  Some, however, are able to combine the role of a journalist with that of a wife and mother, whereas others — particularly in the more orthodox Islamic societies — are paying for their chosen path with a life of permanent singlehood, as their profession is considered way too freewheeling and liberated to make them acceptable “marriage material”.  Yet, all of them display a deep devotion to their calling, which is clearly the ruling passion of their lives; a devotion that has been tested, sometimes up to or beyond the breaking point, by their experience on and off the job; by harassment (sexual and otherwise), misogyny, and violence of every form, from fist cuffs and beatings to bullets, bombs, and an Islamic terrorist executioner’s blade.

“The [foreign correspondent’s] role is vital in an increasingly complex geopolitical environment where events move rapidly and shift unexpectedly. […] In the age of fake news and political manipulation, it is more important than ever for foreign bureaus to be staffed with reporters who develop expertise in a domestic story,”

she writes.  And Zahra Hankir says in the book’s introduction:

“A journalistic and historical narrative on the the Arab world and the broader Middle East dominated by male or Western talking heads is, simply put, incomplete.  Failing to expand that narrative to sufficiently incorporate the voices of Arab and Middle Eastern women in the global media landscape obstructs an inclusive dissemination of ideas about the region.  And yet the public needs precisely that diversity of voices to formulate insightful views on the area and its people.“

All of the contributors to this anthology, incidentally, hold degrees from highly distinguished universities, both in the Middle East and in the West, and most of them have been employed, or are currently still employed, with institutions and news organizations of worldwide renown (New York Times, Washington Post, Boston Globe, CNN, NBC, PBS, Agence France Presse, Wall Street Journal, BBC, Sky News, Foreign Policy magazine, UNICEF, Oxfam International, Reuters, Newsweek, Associated Press, Bloomberg News, Financial Times, and Forbes magazine, to name but a few).  More than one of them have won high awards of their profession. — But I didn’t pay any attention to their credentials while reading and listening to their stories; rather, I let those stories and their deeply personal experience stand for themselves.  For the same reason, I’m not listing any of their individual credentials next to their names: I don’t want to create even a sliver of an appearance of their being appropriated for the West via their Western-owned employers — they simply do not need this.  These are stories that should be read, not because they happen to be told by award-winning journalists who have managed to land jobs with world-famous news organizations, but for their authenticity and intrinsic value alone.

One thought on “Zahra Hankir & Various Authors: Our Women on the Ground: Essays by Arab Women Reporting from the Arab World”