Share your favorite gravestone epitaph (you know you have one).

To a Shakespeare fan, there can be only one … 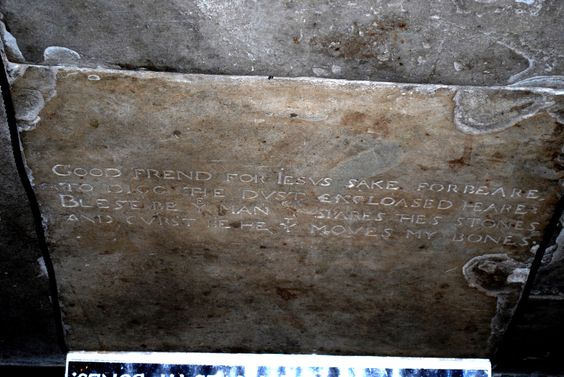 Good friend for Jesus’ sake forbeare,
To dig the dust enclosed here.
Blessed be the man that spares these stones,
And cursed be he that moves my bones. 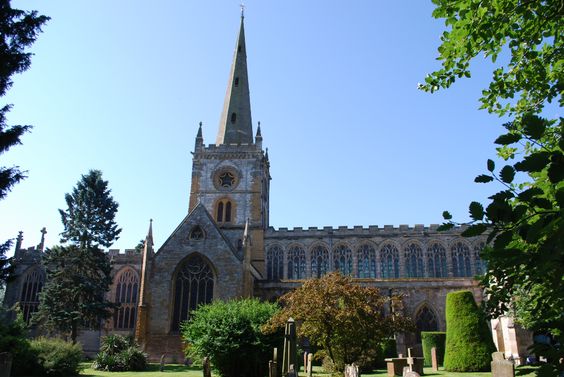 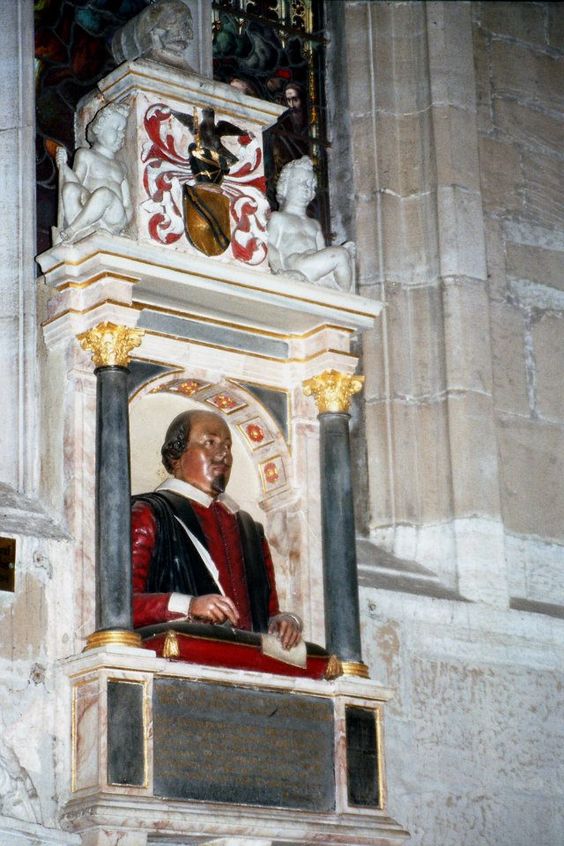 And yes, he wrote that one himself. Apparently he had a premonition just what might happen after his death …

Darth Pedant
Falling deeper down the hole. It’s just his head that’s missing? O.o So I guess the curse was 80% effective…

Murder by Death
And I’m having weird flashbacks to Hamlet and the skull holding scene… :-O

Themis-Athena’s Garden of Books
Hahaha, yes, alas poor William. And y’know what, personally I think it is *exactly* that scene / scenario he was thinking of — it doesn’t even take a close reading of the entire graveyard scene in “Hamlet” to come to that conclusion.

There is a(n alleged) “death mask of William Shakespeare” of murky provenance that first surfaced in a rag and bone shop — I want to say in Frankfurt, but I don’t recall for sure; at any rate, I think it was outside the UK — at some point in the 19th century. Its authenticity has, so far, always been considered questionable, because of its murky pedigree, because of where it first surfaced, and because there was no evidence of either such a mask having been created before Shakespeare was interred or that his grave had ever been disturbed in the centuries since then. Well, I guess the latter argument at the very least no longer holds …

BrokenTune
Were death masks a thing in Shakespeare’s time? I always associated with a little later – more around Schiller &Co. but that might be because that was the first I seem to remember seeing a picture of.

Themis-Athena’s Garden of Books
They were a thing from the Middle Ages onwards and became increasingly popular in the Renaissance — at first in Italy, but not only there. E.g., according to some biographers, John Donne not only had an effigy made for himself but actually modelled for it in his shroud … while still (even if just barely) alive. And of course, there are also plenty of death masks of royals and politicians — there is a death mask of Mary Queen of Scots, the Westminster Abbey collection still has the death masks of Henry VII (Tudor) and his wife Elizabeth of York:

Shakespeare was well-known enough for him (and his entire family) to be given a burial place of honour, in the chancel of Stratford’s Trinity church, as well as (though only a decade or so after his death) a statue in the side wall overlooking his grave (see above). So the idea that he might also have had a death mask is not ludicrous in and of itself. That said, if his family had had a death mask made of him, it would probably have lived on in one of their Stratford houses — my personal guess is, the Hall household, because the bulk of Shakespeare’s assets went to his daughter Susanna and, by extension, her husband John Hall (they were also the executors of his will). Besides, Dr. Hall was not only a practicing doctor but also a man of science, so even family ties aside, his father in law’s death mask would probably have been of interest to him. So on those grounds alone, I’m suspicious of that 19th century rag and bone shop discovery — even if such a death mask were no longer at one of the Shakespeare houses, it would most likely have passed from there to a museum or to Westminster Abbey long ago.

I think barring an actual comparison between his skull (which is likely lost forever — unless there’s a Richard III style rediscovery at some point in the future, that is) and that 19th century discovery, it’s still unlikely that rag and bone shop discovery is anything other than a fraud (or at best, an erroneous attribution) — if for no other reason than for the fact that that “death mask” is actually remarkably complete in its facial features and thus suggests that if was created shortly after his death, not centuries later … and I doubt 19th century medical / forensic knowledge and technology would have allowed for the elaborate reconstruction that would have created such a complete impression from his skull alone (the people who worked on Richard III’s skeleton actually did some fascinating pioneering work in that area).

Anyway, here’s a picture of the alleged “death mask” and the take of Dr. Stanley Wells, then chairman of the Shakespeare Birthplace Trust (and probably the greatest living authority on all things Shakespeare) — written in 2010, so before it was discovered that Shakespeare’s skull had vanished, but absent indisputable proof I can’t see Dr. Wells changing his position on this one, and I agree with him:
http://bloggingshakespeare.com/stanley-wells-shakespeare-death-mask

BrokenTune
I remember that one. It is very cool that he penned it himself.

Themis-Athena’s Garden of Books
It is. And we know what would have happened if the job had gone to Bardolator in chief Ben Jonson …!

BrokenTune
Part of me would love to read that one, too.

BrokenTune
Thanks.
I guess this is why we remember Shakespeare more than Jonson… He came to the point quicker. 😉

Themis-Athena’s Garden of Books
So true. And I wonder if he would actually have appreciated thus being praised over the moon. I mean, honest appreciation and applause is one thing, but geez. And it’s not like Shakespeare himself wasn’t the master of the evil pun or anything …

Obsidian Blue
Someone stole his body? Or apparently his head from what I am reading above? Good grief!

Themis-Athena’s Garden of Books
Someone apparently stole his skull — as a radar scan of his grave revealed a while ago. Yup. 🙁
https://www.theguardian.com/culture/2016/mar/23/shakespeare-stolen-skull-grave-robbing-tale-true

Portable Magic
Crazy! Was grave-robbing a common thing at the time?

Themis-Athena’s Garden of Books
Very, unfortunately. 🙁 Never mind it also being considered a sacrilege, and “body snatchers” (people who stole corpses from cemeteries and sold them to hospitals / doctors for purposes of the study of anatomy) were subject to the gravest penalties.

Portable Magic
Ahhh. For some reason, I associate the stealing of bodies for medical research with the Victorian era. I didn’t know it had been going on for so long!

Themis-Athena’s Garden of Books
It’s possibly also how Leonardo da Vinci came by some of the earlier corpses off which he learned about human anatomy, though later on, when he was a well-known artist, he collaborated with doctors and hospitals.

One thought on “William Shakespeare’s Epitaph”