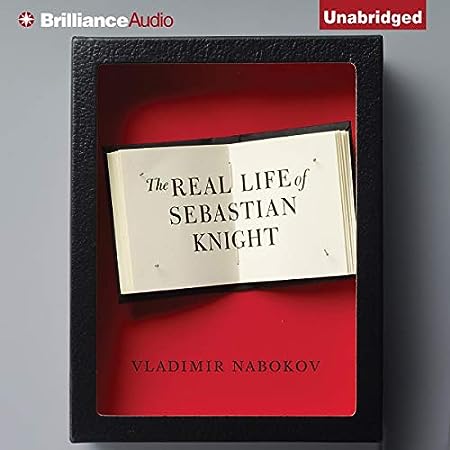 Hoo boy. This starts out really nicely, as the story of two Russian half brothers growing up remote from each other (even though in the same home), from which beginning we segue more or less seamlessly into the surviving younger brother’s quest for the life and identity of his elder sibling, who under the English version of his name has become a famous writer and died prematurely, after having published only a few highly experimental novels. The younger brother decides that, if he has never managed to get close to his older brother in life, he’ll at least make up for that post-mortem — and the final impetus for his decision not only to find out about his deceased brother’s personality and life but also to publish his findings in the form of a biography is the realization that one highly sentimentalized, pretentious and self-serving biography of his brother has been published already, by a man who had wheedled his way into the famous writer’s confidence for a while and fleeced him right and left under the guise of acting as his secretary.

This being a book by Nabokov, however, of course things don’t remain as straightforward as that. Sebastian Knight (the subject of his younger brother’s quest), it turns out, was a writer not only of an experimental bent but, more specifically, a bent that places construction and form over substance; and the further his younger brother progresses in the investigation of his life and work (in the process of which we’re treated to lengthy discussions of Mr. Knight’s novels and their structure), the further he himself begins to mimic his older brother’s literary style … which though undoubtedly brilliant from a purely linguistic point of view — and you’d never guess this was Nabokov’s first novel written in English if you didn’t have your nose dumped into this very fact by editors, blurb writers and reviewers wherever you look — just isn’t my cup of tea, so my enthusiasm for this book (which had been huge initially) began to wane more and more the further the narrative progressed. Add to that a highly disagreeable and (sorry, it has to be said) highly clichéd encounter with Mr. Knight’s final female flame, and an exercise in monumental indecisiveness and stupidity on the younger brother’s part towards the end (in which he only engages for transparent reasons on the part of the author, Mr. Nabokov, himself), and much of my initial delight had been pulverized to nothingness towards the end.

I suppose my response is in large parts of the “it’s me, not you” kind — and it is at least in part motivated by my being plain p***d at the arrogance exhibited both by Mr. Knight and, in his wake, by his younger brother towards readers who happen to dislike a writer’s “experiment and form over substance” approach. Also, it would be unfair to rate this book solely on the basis of my ultimate disenchantment with it and totally disregard my much more positive initial response. So after having dithered a bit over my rating, I eventually plumbed for a middling 3.5 stars. But, as almost always with Nabokov, YMMV.

This was one of several books I read as my April entry in the (M)DWS author birthday challenge.