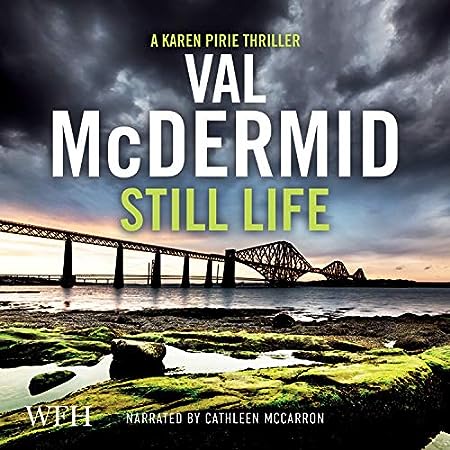 After Ann Cleeves’s Red Bones, another May 2021 armchair visit to Scotland; though this time to Edinburgh — with brief but significant excursions to the English Midlands, Ireland and Paris, that is.  (France yet again, too — after I had already read Agatha Christie’s Mystery of the Blue Train, Georges Simenon’s Maigret’s Holiday, and Arthur Conan Doyle’s Sir Nigel earlier in the same month!)  I had held back a bit on this latest installment of Val McDermid’s Karen Pirie series, as in the last book, Broken Ground, she had introduced a new character — as an antagonist to Pirie — whom I absolutely hated, and for that character to continue to intrude into my reading pleasure as significantly as she did in that other book would have made me think about whether or not to continue reading the series at all.  Which would have been a real shame, as of all of McDermid’s series, the one focusing on Karen Pirie is, or has so far always been, far and away my favorite. — Fortunately, however, while the “Dog Biscuit” (the new unloved character’s nickname) does make her presence felt here, too, she is not anywhere near as much of a nuisance as in the last book.  In fact, McDermid is back at the top of her form.  And while she does introduce yet another new character, it’s someone I wholeheartedly approve of — so double hooray for all that.

Karen Pirie, as always, has her hands full here; she’s already heading an investigation involving an unidentified corpse found to have been left behind in a camper van in the garage of an Edinburgh residential home, when the determination is made that another investiga,tion concerning a body recently fished out of the Firth of Forth, is related to a cold case that Karen has been reviewing in the past, and therefore more properly assigned to her.  Along with the second case’s file, Karen inherits (or is initially being given on loan) the services of aspiring young Sergeant Daisy Mortimer, who had been part of the original investigation conducted in Fife.  So Karen henceforth divides her time between both cases, while assigning her existing bagman, D.C. Jason “The Mint” Murray to the investigation of the matter involving the corpse in the garage, while Daisy gets to continue working on the investigation into the death of the body fished from the waves.  Soon both cases take the investigation into various angles of the art world (hence the book’s title) … while an annoying “bug” imported from Italy is causing unforeseen backlogs and personnel shortages at the crime lab (the book is set in February 2020, its epilogue on the eve of the March 2020 lockdown), and the killer of Karen’s former lover Phil Parhatka is released from prison; an event that Karen is determined not to let pass by unnoticed.  (Fortunately McDermid avoids the more obviously clichéd avenues there, though for a moment it looked like things would go down just that road.)

Like several other authors who have published books since the 2016 Brexit referendum, McDermid doesn’t hold back with her opinion on the issue — more than that, though, she finds several proximate examples showing how the work of Britain’s police, and the prosecution of crimes, will conceivably be made harder in the future in cases that involve cross-border cooperation (as well as, incidentally, a cooperation between English and Scottish police officers, should Scotland at one point become fully independent, which since the Brexit votum has moved back onto the cards, too).  So, while McDermid has sent Pirie away from Edinburgh in previous cases, too, this time she does it to ask, at times implicitly, at times explicitly: How are British police officers going to cooperate with their Irish and Continental European colleagues if their investigations take them abroad, onto those foreign colleagues’ patch: are they still going to be able to have a hand in the investigation, e.g. interrogate witnesses, review documents or search apartments and other locations on their own, or are they formally going to have to request judicial assistance and leave the actual work to the local forces?  How much more difficult is it going to be to to obtain and execute an extradition warrant for a British suspect who has fled to the Continent (or the Republic of Ireland)?  Are British police officers still going to take advantage of the open Irish border and the particularities of the Irish geography?  How willing are English officers going to be to tolerate the impromptu invasion of their district by Scottish officers in hot pursuit (if that sort of hot pursuit is still going to be possible in the first place), should Scotland ever become independent? — McDermid doesn’t try to answer these questions, but I liked the book all the more for the fact that she asks and highlights them.  As I said above, she truly is back in top form here … now let’s just hope that the “Dog Biscuit” is not let back out of the tin (or the kennel) in full force again next time around, whenever that is going to be.  I like Karen Pirie, Daisy Mortimer, and “The Mint” just fine without the bark of that nuisance factor personified.