Val McDermid: A Place of Execution 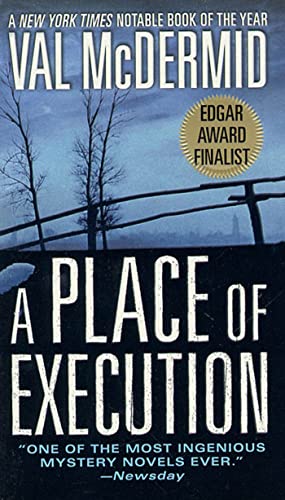 A Place of Execution is a chilling tale set in rural Derbyshire, and woven around the disappearance of Alison Carter, a teenage girl. The year is 1963, and the place is the (fictional) backwater village of Scardale; secluded from modern life, populated by only a few families who have been inbreeding for generations; and ruled, like in medieval days, by a squire who owns everybody and everything in the village. And it is none other than the stepdaughter of much-hated new squire Phillip Hawkin, a newcomer to Scardale’s tight-knit society, who has disappeared.

Following the investigation led by newly minted D.I. and Jimmy-Stewart-look-alike George Bennett and his more experienced partner, Sergeant Tommy Clough, we as readers slowly become familiar with Scardale and its inhabitants, who are reluctant to open up to outsiders – even if they don’t hate them as much as Hawkin – and in that reluctance, provide less than the much-needed help in discovering Alison. In fact, when ultimately a suspect is arrested, on the strength of evidence tying him to both Alison’s disappearance and another horrific crime, Alison is still missing. And she remains missing throughout the suspect’s trial. It will take all of 35 years and a new investigation by journalist Catherine Heathcoate, who befriends Bennett after having met his son Paul, and who is able to procure Paul’s help in convincing Bennett to revisit those long-past events which never ceased to trouble him, to reveal a truth which by then seemed all but buried for good … and like the story’s protagonists, many a reader may be left wondering whether this is not the way it should have stayed.

A Place of Execution is a well-plotted thriller which ambitiously tackles issues from depravity, vice and vengeance to sin, deceit, guilt and justice; and all of these, on multiple levels. It purposely leaves the questions it asks unanswered, forcing its readers to come to their own terms with each of these issues. And by changing its narrative perspective from George Bennett in 1963 to Catherine Heathcoate in 1998, it offers the reader two different angles from which to see the events and the questions they pose.

Unfortunately, for me, the change of the narrator’s viewpoint brought with it a certain loss of depth and perspective. Whereas the social setting of Scardale village and the characters introduced in the book’s first part are compellingly drawn down to their last unique feature and down to the last one of the supporting characters, those introduced in the second part are in many respects only superficially sketched pastiches that failed to engage me. And whereas in the book’s first part nothing is left to coincidence and random, the second part is riddled with coincidences; each of which individually might have been within the realm of possibilities, but which taken as a whole were just a tad too much for me to accept. I couldn’t shake the impression that for the sake of the coveted change of narrating perspective in the book’s second part, Ms. McDermid was willing to sacrifice more than a negligible part of the integrity and the feeling of authenticity she had so effectively created before; and for the sake of driving the plot to its conclusion she sacrificed the character development which had worked so well in holding the story together in the beginning.

Fortunately, the book’s second part is decidedly shorter than the first one; and while it dragged a little for the reasons mentioned above, I still found myself interested enough to read on to learn how it would end and whether my suspicions as to the solution of the mystery itself were correct – only to find that while I had correctly guessed the core facts as such, the book’s end does not offer a simple solution at all. Rather, in real life, it would almost certainly have been only the beginning of a very long and difficult healing process on which the protagonists would have had to embark.

To her credit, Ms. McDermid shuns the gore and sensationalism to which her book’s central theme would easily lend itself. And even if you are reading A Place of Execution primarily for the mystery story it contains, there is plenty to puzzle over in terms of clues, pseudo-clues, red herrings, red flags and more. Bear with George, Tommy and Catherine until the end. You won’t pxregret it – not half as much as they find themselves wishing they had never touched the case of Alison Carter’s disappearance.

In the Derbyshire Peak Distrct
(Photos mine.)