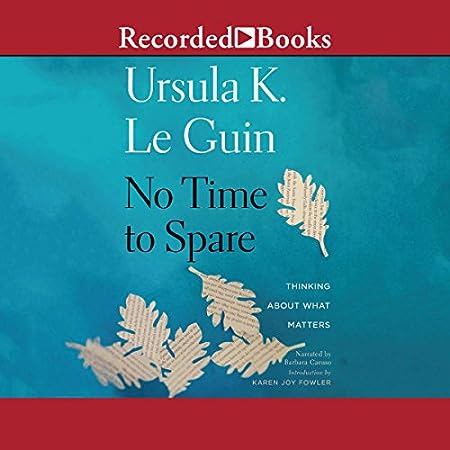 Ursula K. Le Guin is an author I’ve only started to discover very recently.  I knew that she fought hard against the qualification as a genre (sci-fi / fantasy / speculative fiction) author; and she has always had all my support to the extent that “genre” is used as synonymous with “less worthy” (or, as the division goes, “entertainment fiction”, as opposed to the more worthy “serious literature”, i.e., LitFic and the Classics … never mind that many of the latter started out, even according to their own authors’ intentions, as “entertainment”).  However, for the longest time I still wasn’t sure to what extent Le Guin was for me, simply because I don’t read a lot of speculative fiction (and if I do, it’s more likely than not going to be fantasy rather than science fiction).  This attitude to Le Guin’s writing only changed when I discovered her blog; but at that point, it changed rapidly.  In light of this, it also made sense to me to start my “resident author” reading of her works with her final book, the contents of which is taken from her blog posts.

In texts written between October 2010 and January 2016, Le Guin ruminates and reminisces on the meaning of words, literature, “the lit biz”, writers and writing, her last cat (a cheeky boy named Pard with unusual eyes), old age, interacting with her readers (or not), utopias, anger, uniforms, opera and the performing arts, education, travel, eggs and how to eat them, Homer and mythology, rattlesnakes, honesty to children and taking children seriously, and, last but definitely not least, “the Lynx”: a maimed (declawed and de-fanged) creature who, after having been found “too much” even without his natural weaponry by the humans who had deprived him of it and who consequently had dumped him again in the wild, where he had eventually been discovered half-starved, and had at last found a sanctuary at the High Desert Museum in Bend (Oregon); and with whom Le Guin found more companionship than with anybody at the nearby retreat where she was staying:

“Like all the birds and animals at the High Desert Museum, he is a wild creature who can’t survive in the wild. […]

The glass wall [of his roofless cage] doesn’t look like one-way glass.  I’ve never asked about it.  If he is aware of the people on the other side of the glass, he doesn’t let them know it.  He gazes out sometimes, but I have not seen his eyes catch on anything or follow anyone on the other side of the glass.  His gaze goes right through you.  You are not there.  He is there.

I found and fell in love with the lynx during the last evening of a literary conference a couple of years ago.  The writers at the meeting had been invited to a banquet at the museum to meet and mix with people who supported the conference with donations.  This kind of thing is a perfectly reasonable attempt to reward generosity, though […] it is an ordeal for many of the writers.  […]  If piano is the opposite of forte, graceful chitchat with strangers is definitely my piano.

During the hour of wine and cheese before dinner […], noticing a corridor off the main hall with no people in it, I sneaked off to explore it. [… G]etting farther away from the chatter of my species, going farther into the dimness and silence, I came on the lynx.

He was sitting gazing out into the dimness and silence with his golden eyes.  The pure gaze of the animal, Rilke called it.  The gaze that is purely gaze: that sees through.  For me, at that moment of feeling inadequate and out of place, the unexpected, splendid animal presence, his beauty, his perfect self-containment, was refreshment, consolation, peace. […]

The resorts are neither city nor country; they are semi-communities.  Most of their population is occasional or transient. [… Their paying guests are] not there because they have common interests with others there but to get away from other people.  Or to pursue sports such as golf and skiing, which pit the individual against himself.  Or because they long for the solitude of the wilderness.

But we aren’t a solitary species.  Like it or not, […] it is entirely unnatural for a human being to live completely alone.  So when we get sick of crowds and yearn for space and silence, we build these semi-communities, pseudo-communities, in remote places.  And then, sadly, by going to them, swarming into the desert, all too often we find no true community, but only destroy the solitude we sought.

As for cats, most of their species are not social at all. The nearest thing to a cat society is probably a troop of active lionesses providing for the cubs and the indolent male. […] Adult male lynxes are loners.  They walk by themselves.

The strange fortune of my lynx brought him to live in an artificial environment, a human community utterly foreign to him.  His isolation from his natural, complex wilderness habits is grievous and unnatural.  But his aloofness, his aloneness, is the truth of his own nature.  He retains that nature, brings it among us unchanged.  He brings us the gift of his indestructible solitude.”

Yes — I think it’s fair to say that I’m glad to have finally discovered Ursula K. Le Guin, and I’m looking forward to reading more by her very soon.

2 thoughts on “Ursula K. Le Guin: No Time to Spare”