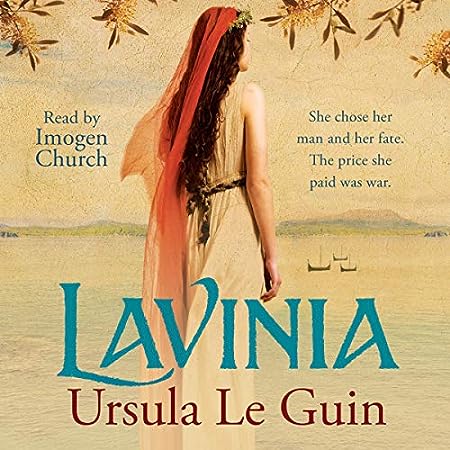 The final six books of Vergil‘s Aeneid (half the epic’s length, until its abrupt and arguably premature ending) deal with Aeneas’s arrival in Latium and the hostilities ensuing after the Latian king, obeying a prophecy, promises his only daughter Lavinia’s hand to the Trojan warrior.  Now, this being a heroic epos setting out to chronicle the adventures and deeds of Rome’s mythological founding father — and written for a predominantly male audience, by a male poet, in one of the (at least structurally) most male-dominated societies of Western history –, it is perhaps not surprising that the fair maiden herself does not impinge greatly on the story; even if it is she who the whole fuss is all about … well, she and the Latian crown, that is.

Still, Lavinia herself rarely features as an actor in the poem; we either learn about her in a brief bit of narrative passage, or we learn what others do to her or with respect of her; but hardly ever what she herself does, let alone what thinks and feels, nor does she ever speak.  Over the course of the entire six books, she is name-checked — including as an object of someone’s commentary addressed to some third party — a puny 14 times, i.e., just over twice per book on average (for those who care, the actual breakdown is 6 times in book VII, once in book IX, twice in book XI, and 5 times in book XII).  The number of times that she is referred to other than by her given name (as princess, bride, etc.) can be counted on the fingers of one hand.  In fact, even her mother Amata, who incites the Latians and Lavinia’s up-to-then foremost suitor Turnus to fight the Trojans, gets considerably more active play than Lavinia herself.

In one of her final works of fiction, Ursula K. Le Guin set out to right this narrative wrong and give the founding mother of what would later become Rome a full life circle of her own, from early childhood to grave and beyond.  In sketching out the events as such, she is — up to the sudden end of the Aeneid with the death of Turnus — guided by Vergil’s narrative; with the significant difference, however, that like its two Greek predecessors, the Iliad and the Odyssey, the Aeneid shows the mythological gods as taking a significant hand in the events narrated, whereas in Le Guin’s account they themselves make no appearance at all.  Le Guin does allow for an unspecific supernatural element: there are events seen as auguries (those mentioned in the Aeneid and also others), and there is the sacred grove where both Lavinia and her father on significant occasions spend the night to find spiritual guidance in their dreams; but Amata’s vengeful outbursts and her wild, bacchalian abduction of Lavinia, for example, are portrayed as expressions of a madness which (unnoticed by most) had already struck her at the childhood death of her sons, not as incited by the Furies (Erinys), who in turn have been called to action by Juno (Hera to the Greeks), as they are in Vergil’s text.  Nor does Le Guin have much time for the verbal battle royal between Juno and Aeneas’s mother, Venus (Aphrodite), during which Juno effectively counters Venus’s pleas to Jove (Jupiter / Zeus) to interfere on her son’s behalf by telling her if she’d wanted to spare her son having to flee his burning Trojan home and find or conquer a new home elsewhere, she ought not to have set Paris onto Helen’s tracks in the first place — and Jove, apparently equally annoyed with both of them, eventually decrees that the gods are to stay out of the humans’ dispute entirely (which then proceeds with significant losses on both sides, until Aeneas finally kills Amata’s — and Juno’s — champion Turnus).  In Le Guin’s account, these are the gods of the Greeks and the Trojans (and later, the Romans), but not of the Latians; Lavinia learns something about them from her dream encounters with Vergil, but she can only understand them to the extent that she can reference them to the more archaic and more naturalistic divinities of her own people, and she has a hard time imagining them as actors on an equal or even superior footing to the humans.

Yet, Le Guin, writer of fantasy, is, of course, interested in the mythological nature of Vergil’s tale, and of Lavinia’s existence as such, and thus she presents us with a creature existing in a reality entirely of her own, brought to life by “her poet” (who is only once identified by his full name, though we’re told that he also gives it in his and Lavinia’s first encounter, where she identifies him as Etruscan by his last name, Maro, and he tells her that while his spirit is appearing in her dreams — and her spirit in his — his dying body is lying on a ship on his final voyage to Brundisium (Brindisi, Apulia)): Lavinia, sprung from “her poet”‘s imagination like Athena (Minerva) from the head of her father Zeus (Jove), is neither mortal nor immortal; if anything, she is fated to fade away gradually as all unearthly creatures are, a shadowy being of unfulfilled potential even in “her poet’s” narrative, and she is real only for purposes of that narrative — and her own:

“I know who I was, I can tell you who I may have been, but I am, now, only in this line of words I write.  I’m not sure of the nature of my existence, and wonder to find myself writing,”

“As far as I know, it was my poet who gave me any reality at all.  Before he wrote, I was the mistiest of figures, scarcely more than a name in a genealogy.  It was he who brought me to life, to myself, and so made me able to remember my life and myself, which I do, vividly, with all kinds of emotions, emotions I feel strongly as I write, perhaps because the events I remember only come to exist as I write them, or as he wrote them. […]

I won’t die.  Of that I am all but certain.  My life is too contingent to lead to anything so absolute as death.  I have not enough real mortality.  No doubt I will eventually fade away and be lost in oblivion, as I would have done long ago if the poet hadn’t summoned me into existence.”

And later she adds:

“I am a fleck of light on the surface of the sea, a glint of light from the evening star.  I live in awe.  If I never lived at all, yet I am a silent wing on the wind, a bodiless voice in the forest of Albunea.”

Similarly, in her dreams encounters with “her poet” in the sacred grove, he tells her about some of the things that will happen in his epic, but he also warns her:

“I think it has not happened yet. […] Perhaps it never did — never will happen.  You should not be concerned about it.  I made it up.  I imagined it.  A dream within a dream … within the dream that has been my life …”

The novel takes a while to find its feet; and while Le Guin naturally has to have recourse to a certain amount of poetic license in her endeavour out to fill in the gaps in Vergil’s narrative and give Lavinia not only a voice of her own and a full life up to the moment of the Aeneid‘s abrupt ending but also beyond, all the way to old age, there are passages in both the early parts of the book and the “post-wedding-to-Aeneas” part — where Le Guin resorts to other ancient sources* as well as contemporary works to complete the tale — that I could have done without.  Arguably, as the ancient accounts on which Le Guin directly or indirectly relies to complete Lavinia’s history, are narratives that very much take Lavinia as a being of flesh and blood (the founding mother of the dynasty from which would spring the twin founders of Rome, Romulus and Remus), there is also a certain shift in narrative tone, from the earlier dream-interspersed, more obviously mythical narrative — which ends with the rendition of the hostilities between the Latians and the Trojans, where Le Guin elaborates on the vicious brutality of the fight that can be gleaned from the Aeneid with all that she’s got — to an overall slightly more matter-of-fact narrative, particularly following Aeneas’s premature death.  The last time we see Lavinia seek out the sacred grove specifically for the purpose of finding spiritual guidance is when she takes her and Aeneas’s son Silvius to the woods in order to be able to bring him up without interference from his older half-brother, and Aeneas’s successor on the throne, Ascanius.  After that time Lavinia remains in the woods and becomes a somewhat legendary person to her own people, but with the exception of one significant oracular moment, the events at Ascanius’s court (including those between Aeneas’s death and Lavinia’s and Silvius’s flight) are essentially rendered as historical fiction; and so is the summary account of the remainder of Lavinia’s life. — So, all in all a slightly uneven tale, but still a beautifully-told one, and one that I nevertheless enjoyed considerably.

* Chiefly the beginning of Appian‘s Roman History, the Roman Antiquities of Dionysus of Halicarnassus, and Livy‘s History of Rome (Ab Urbe Condita).