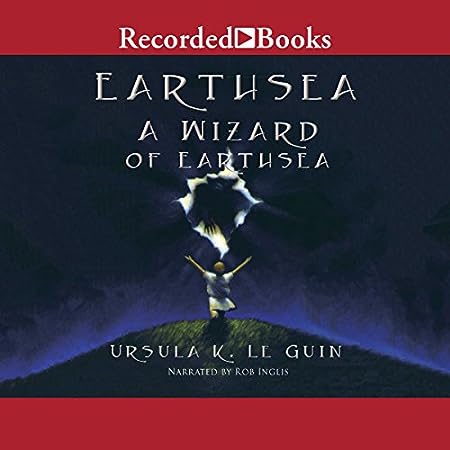 While my first two Le Guin reads for the (Dead) Authors in Residence challenge were both taken from Le Guin’s final years, for my last book I went back to her very beginning and picked the first book of her Earthsea Cycle.  And, while I know that this is an awardwinning milestone of (YA) fantasy and I have no doubt that I would have loved it to distraction if I’d first have read it in my own youth, I find that coming to it for the first time now, at a later point in life, I’m somewhat less enchanted than I might have been otherwise (and than, based on Le Guin’s more mature writing, I expected to be).

Oh, sure, there’s still plenty of gorgeous prose and the world building holds together beautifully, but (1) this is very obviously YA writing, full of lessons about growing up, character building, and the acquisition of wisdom, and this sort of thing appeals to me less and less, the further I am growing away from that phase of my own life; (2) the lessons — and indeed the entire learning arc — are, at heart, those that can also be found in virtually every other fantasy novel (YA or not), and (3) the world building, while imaginative, is also essentially similar to that of many another fantasy novel.  Again, it might have made a (conceivably huge) difference if I’d read this book earlier, and some of the literature I have read in the interim may have been — indeed, probably was — influenced by Le Guin’s writing in turn, and that may have contributed to further skewing my perspective; but there is no denying that Le Guin’s Earthsea, like almost every other fantasy novel published during the second half of the 20th century and after, in the first instance owes a colossal debt to Tolkien’s Middle Earth and Lewis’s Narnia; and I find that I still prefer the originals to the books that followed in their tracks.

The writing and world building is nevertheless enjoyable enough to easily rate four stars, and I will probably continue reading the series; I might even acquire, one day, the illustrated omnibus edition published shortly after Le Guin’s death.  But having now sampled three very different examples of Le Guin’s writing, I find that what seems to work best for me is her nonfiction, followed by her later and / or historical fiction (I’m really looking forward to exploring her Orsinian Cycle); more so than the books that established her reputation as a writer to begin with.