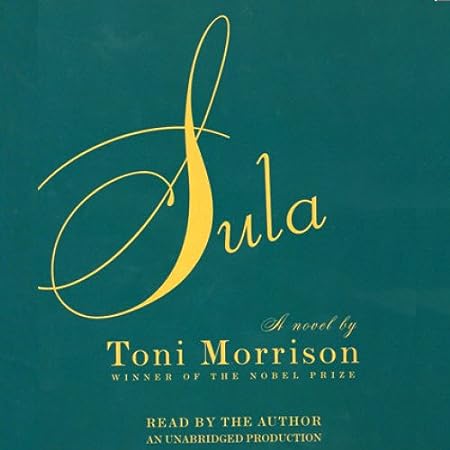 I’d been planning to pair this book with Tsitsi Dangarembga’s Nervous Conditions, as an exercise in comparing an African American and an African coming of age story, but Nervous Conditions never materialized in my mailbox, so I’m going to have to postpone that reading experience to a later date.

Which, perhaps, isn’t such a bad thing after all, since Toni Morrison’s novella packs an incredible punch in and of itself and turned out to be much, much more than “merely” a coming of age story.  It is that, too, sure — the story of two friends coming of age in Jim Crow America, one of whom (the eponymous Sula) grows up to be a rebel, while her best friend Nel settles down to become a wife and mother.  But it is also a tale of contrasts in other respects; chiefly the contrast between black and white: the privileged white community in the valley, near the river, and the black community on the nearby hill, where the land is less arable and yields poorer results, but which bears the name “Bottom” because its founder has been bamboozled (by a white man, of course) into believing that it is “the bottom of Heaven”.  And the contrast between the lives of the white community (which we see, almost exclusively, as a uniform collective whose chief interaction with its black neighbors consists in keeping them out, e.g. by way of denying them lucrative employment on road construction projects) and the highly individual lives and fates of several members of the black community; Sula’s and Nel’s families and those whom they encounter in ways that profoundly impact their individual lives.  And whenever there are interactions between members of the two ethnic groups, we not only get poignant glimpses of early 20th century America — such as the fact that blacks did not have access to toilets when traveling by train, however long distance their trip –; these interactions also, almost invariably, leave the blacks involved in them sullied in some fashion or other … which however doesn’t make them appear darker but lighter in complexion.

I suppose one of the questions that Morrison invites readers to answer for themselves here is whether Sula is evil, perhaps even Evil incarnate, but I’m not even going to go there.  Sula suddenly leaves the community on the night of Nel’s wedding and when she reappears, equally suddenly, several years later, there are, on their face, plenty of things she does — including to Nel — which incur the community’s righteous anger and even downright vitriol; and which bring her and Nel’s friendship to breaking point.  And not all of these acts are explicable, let alone justifiable, by Sula’s own experience while growing up, or by the life experience of other members of her family.  (One incident in particular had me literally gasping for breath, and while Morrison clearly had a reason for including it, to me it smacked of gratuitous horror and it is almost singlehandedly responsible for my withdrawing a half star rating from what would otherwise doubtlessly have been a five star book.)  Because in the final consequence this isn’t Sula’s but Nel’s story, who for all of Sula’s defiance (of rules, of people, of fate) shows herself the stronger and more steadfast of the two.  And I just want to leave it at that.

A final note on the audio version: I am incredibly glad that her publisher made Toni Morrison sit down and record narrations of all of her major works, so as to ensure that her voice continues to be heard not merely figuratively but actually, too.   Her spoken narration, where she not so much tells the story as softly, darkly purs it into the reader’s ear, is not equally conducive to all of her books (first time readers of Beloved, especially, are well advised to approach the novel by way of a print edition in preference or at least in addition to Morrison’s audio narration), but for Sula it worked perfectly and subtly enhanced my reading experience in the way that only a skillful reading by the book’s own author can.  (There are plenty of authors who are well advised to leave the narration of their books to others: Toni Morrison manifestly is not one of those; even if her style won’t necessarily suit everybody.)

All in all, an excellent start into the second month of the year, and a continuation of my Diversity Bingo reads on the same high level that had been set by the books I read for it in January.

One thought on “Toni Morrison: Sula”