The Medieval Murderers: Sword of Shame 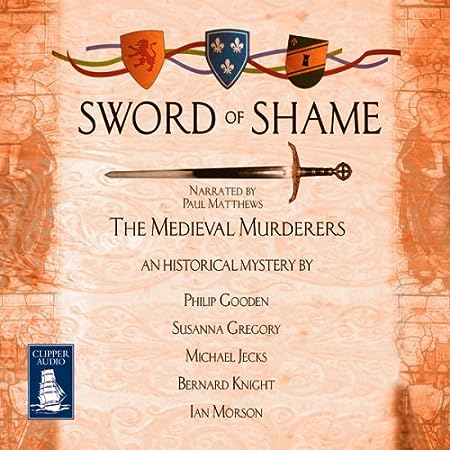 Following on from my successful foray into Philip Gooden’s — relatively — new series, I decided to conclude the month of March with a revisit of one of the Medieval Murderers‘ round robins; the second book from the series, Sword of Shame.  In its entirety, this book is fairly average for the series — well-researched throughout, with a balance of (a few) weaker and (mostly) stronger individual chapters; however, the one passage that I particularly love, and which stands out to me upon every reread as much as it impressed me when I read this book for the first time, years ago, is its opening, written by Michael Jecks, where we learn — slowly, deliberately, step by step, from the perspective of the blacksmith whose artistry creates the weapon — how the titular sword came into being first of all.

Jecks then goes on to narrate how this magnificent creation acquired its reputation of being a “sword of shame”, and I have to hand it to him, nobody writes medieval armed skirmish like Michael Jecks.  Well, and Bernard Cornwell perhaps, but Cornwell’s focus is on blood and gore first; the more, the better, and everything else, including the way those involved actually experience the fight, a distant second — Jecks’s focus is always, always on the humans involved first and foremost and on the fact that, whatever the overall military outcome of the battle, skirmish or other fight, on an individual level there is always suffering and loss.

Of the subsequent chapters, the one that I consistently enjoy the most in this book is Ian Morson’s introduction of Nick Zuliani, Venetian jack-of-all-(dishonest)-trades: I don’t necessarily like all of Zuliani’s subsequent adventures, but this first one, which involves an insalubrious mix of murder and 13th century election rigging in La Serenissima, is a spirited hoot and a half (and also has a very memorable opening in turn).  And I also like how Michael Jecks, in his “real” own chapter following on Morson’s,* indirectly uses Zuliani’s character to deftly add to the sword’s by-then already considerably sullied reputation, while at the same time juxtaposing rational analysis and superstition in his characters’ discussion of the sword’s real and alleged powers.

* In each of the Medieval Murderers round robins, the opening chapter introducing the object (or theme) that we are following through the centuries over the course of that book is written by a different author, as is the concluding chapter, which brings the object in question into our own age.  In between, each contributor to the books gets to write one episode involving the object being traced and its fate (or misdeeds) in the world and with regard to the protagonists of that particular author’s “regular” historical mysteries, or in the context of a recurring setting which the author in question has chosen to explore specifically in in the context of the Medieval Murderers round robins.  These individual episodes are “technically” self-contained in terms of plot and world-building; they do, however, contain occasional references to the same book’s respective previous episodes, as well as, of course, in their entirety forming the cohesive whole that makes up the eponymous object’s life cycle over the course of the entire book.