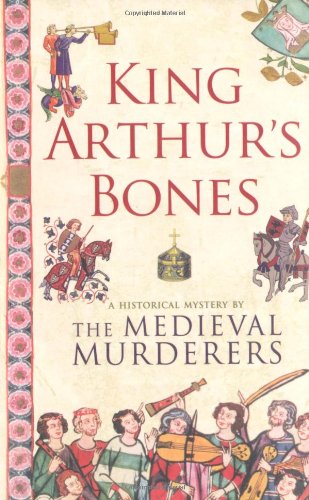 Royal births, weddings and burials have fascinated us ordinary humans since time immemorial; and while people’s proprietary interest in the fate of the world’s rulers is easily understandable in societies where those rulers wield supreme power – including the Europe of yesteryear – the fascination is no less noticeable in today’s world, where the discovery of royal remains such as those of Richard III, Alfred the Great or the last Romanov Tsar and his family are still apt to make considerable headlines.

But while in today’s world the identity of the august personage who may or may not have left behind the earthly remains uncovered under a Leicester parking lot, in a clearing in the midst of a Russian wood, or in a forgotten storage box in a Winchester museum can be determined (or at least narrowed down) by science, tools such as those of forensic anthropology and DNA analysis were not available to those making comparable discoveries in centuries and millennia past.

Enter, thus, the Rosetta Stone of all British historical lore: King Arthur himself and the fate of his bones – assuming, that is, that he ever lived at all. If William of Malmesbury’s history of Glastonbury (ca. 1130) and Chronicle of the Kings of England (1125), Geoffrey of Monmouth’s History of the Kings of Britain (1136) and Gerald of Wales’s book On the Instruction of Princes (ca. 1193) are to be believed, Avalon – the place of Arthur’s burial – is modern-day Glastonbury; and indeed, an 1191 excavation in the cemetery of Glastonbury Abbey uncovered an oaken coffin as well as, below a stone, a leaden cross with the inscription “His iacet inclitus Arturius in insula Avalonia” (commonly translated as “Here lies King Arthur buried in Avalon” or “on the island of Avalon”). The coffin contained the bodies of a large man and of a woman with golden hair, which was still intact, but crumbled away upon being until touched. The fifth entry in the Medieval Murderers mystery “round robin” series, King Arthur’s Bones, takes the 1191 Glastonbury discovery as its premise and from there embarks on a wild ride, at the heart of which is a story that shows its authors to be conversant not only with the major elements of Arthurian lore but also with the recurrent elements of all historical conspiracy theories: A (truly or apparently) at least partially unexplained fact, event, or series of events, and two or more factions with opposing interests, one or all of whom stand to gain from suppressing or manipulating the truth. Indeed, to a certain extent all of this series’s books are based on this sort of premise: it is therefore probably only logical that the authors should eventually also have tackled the Arthurian legend, even if Philip Gooden, in his entry for this book, has William Shakespeare ponder the same topic and come to a contrary decision. – As in virtually all books based on such a premise, a historically-minded reader’s enjoyment depends as much on the respective writers’ skill as it does on the reader’s own ability to suspend his or her disbelief (or willingness to regard the back story as fiction from the outset). That said, as in previous installments of the series, the authors nevertheless also prove themselves to be sound enough medievalists and historical writers to go to great lengths to document the demonstrably existing historical bases of the book’s individual episodes, down to the recorded names of localities, streets, persons, and major events used as the various episodes’ backdrop.

Like all of the Medieval Murderers “round robins,” the book follows its eponymous titular object from the Middle Ages to the present day; in this instance, from Glastonbury to medieval Wales (which predates even Glastonbury and Tintagel as the root of Arthurian lore and where King Arthur was / is hailed as mythical protector, believed never to have died at all but merely to be asleep in a mountain cave), then to Abbey Dore in Herefordshire (just east of the Welsh border), then to Devon and Cornish Trevenna / Tintagel (though the latter “off stage,” as it were) and finally to London: Shakespeare’s city, then the 19th century territory of spies, Bow Street Runners, Resurrection Men (bodysnatchers) and self-declared Egyptologists, and finally the modern day excavation site of Bermondsey Abbey, where a previous installment of the series (House of Shadows) had already featured one rather gruesome discovery, and where the team of archeologists working on the site now discovers the bones of a large man who must have died in the 6th century, inside a wooden box likely dating from the late 12th century, which itself is locked inside a 19th century metal coffin. (Yet, even taking all the rest of the story for granted, whether or not the very bones that were excavated in Glastonbury are the same bones that also make an appearance in the chapter set during Shakespeare’s time is left somewhat ambiguous; based on the information given in the chapters immediately preceding and succeeding, this is at the very least doubtful: a conspiracy theory loop within a conspiracy theory narration, thus.) Along the way, there is plenty of murder and mayhem; medieval battles, accusations of fratricide, blackmail, treachery, as well as the Knights Templar, King James I’s (in)famous Beasts in the Tower, and a mysterious sect of “Guardians” charged with the protection of the bones.

The Medieval Murderers series is a joint effort of Susanna Gregory, Bernard Knight, Michael Jecks, Ian Morson and Philip Gooden, with Karen Maitland joining the group from the sixth installment on (The Sacred Stone). While the books frequently, though not always, involve the main characters from the respective authors’ individual series, in King Arthur’s Bones the only series characters featured are Michael Jecks’s ex-Knight Templar Sir Baldwin Furnshall (Keeper of the King’s Peace) and Philip Gooden’s Nick Revill, a junior player in the King’s Men, William Shakespeare’s company. In some instances, for me this worked to the book’s advantage – while I like the doses of medieval forensics usually presented by Bernard Knight, overall I could get into the chapter authored by him here much quicker and, to me, it read more fluently and with greater variety than those in previous Medieval Murderers books; the absence of recurring characters who continually seem to be growling or otherwise ill-humored, while displaying few other distinguishing traits, doubtlessly had something to do with this. On the other hand, I have a particular fondness for Susanna Gregory’s 14th century Cambridge physician Matthew Bartholomew and his sidekick, Michaelhouse College’s Senior Proctor William, and I missed them in this book; even though given the book’s storyline as a whole, I’ll grant the authors that the omission makes sense. Ian Morson, finally, seems to be at home in whatever period and milieu he touches – the episodes authored by him are almost always among my favorites, and that was definitely the case here, too.

Overall, this is one of the series’s stronger installments, eminently readable – and an enjoyable twist on Arthurian lore and historical conspiracy theories.