Guy Fawkes Night, also known as Bonfire Night, is an annual commemoration observed on November 5, primarily in Great Britain. Its history begins with the events of November 5, 1605, when Guy Fawkes and his co-conspirators of the so-called Gunpowder Plot were arrested for planning to blow up explsives placed beneath the House of Lords.  Celebrating the fact that King James I had survived the attempt on his life, people lit bonfires around London, and several months later an Act of Parliament enforced an annual public day of thanksgiving for the plot’s failure.  Traditionally, Guy Fawkes Night bonfires are kindled by a supersized straw effigy.

Read a book about the English monarchy (any genre) –OR– about political treason –OR– a political thriller –OR– a book where fire is a major theme –OR– which has an image of a fire on the cover.

Post pictures of past or present bonfires, fireworks (IF THEY’RE LEGAL) or sparklers. –OR– Host a traditional English tea party, or make yourself a nice cup of tea and settle down with a good book to read.  Which kind of tea is your favorite? Tell us why. 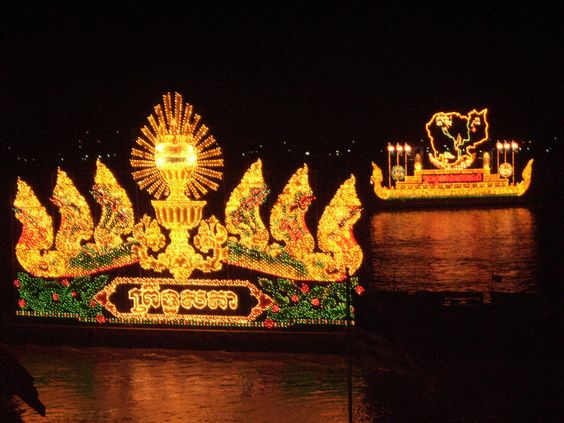 The Cambodian Water Festival Bon Om Touk is celebrated in early November and commemorates the end of the country’s rainy season, as well as the annual reversal of the flow of the Tonle Sap River, the central part of a hydrological system in the Lower Mekong Basin which the Mekong River replenishes with water and sediments annually.  The Water Festival was first celebrated in the 12th century, around the time of Angkorian King Jayavarman VII, when the King’s Navy helped usher in the Cambodian fishing season. The festivities made the gods happy and secured good harvests of rice and fish in the upcoming year.  Another interpretation is that Bon Om Touk was a way for the King to prepare his navy for battle. — The biggest celebrations take place in Phnom Penh, lasting night and day for three days, with boat racing along the Sisowath Quay and concerts.

Post a picture from your most recent or favorite vacation on the sea (or a lake, river, or any other body of water larger than a puddle) –OR– if you’re living on the sea or on a lake or a river, post a picture of your favorite spot on the shore / banks / beach / at the nearest harbour.