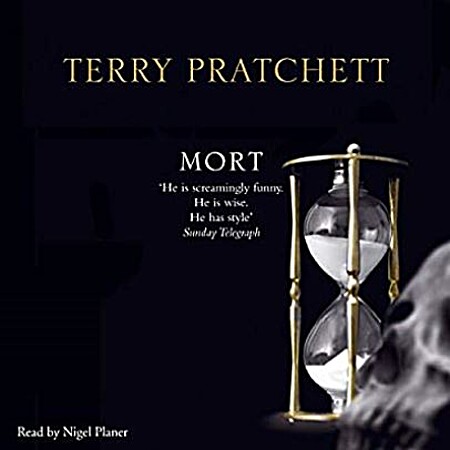 Hmm.  I suspect like other early Discworld books (particularly Equal Rites), I’m going to come to like this one considerably better upon a reread.  Going by first impressions, it begins with a hefty shower of sparkle, and both dialogue and plot hit high points whenever either of the two female leads (Death’s adopted daughter Ysabell and Princess Keli, heiress to the throne of Sto-Lat) or, of course, Death himself appear — I mean, just the mere notion of Death attending a party or ditching his day job to work as a chef is sheer genius in and of itself.

Somehow, though, it’s definitely still on the light side of Pratchett, and the main wizard’s Death’s apprentice plotline doesn’t quite work for me — maybe because Pratchett already did similar things in the first two books (what but a bumbling wizard’s apprentice is Rincewind?), only with a pointed spoof of 1980s fantasy conventions added into the mix.  I also have to say that the ending didn’t quite work for me.

Obviously, the idea of a “swashbuckler meets Star Wars meets Pratchett” cloak and dagger sword light saber scythe duel involving Death as such is yet another brilliantly inspired choice.  BUT Death is (as we are explicitly assured over and over again in this book, too) the ultimate impartial arbiter, devoid of any emotions.  (He famously has no sense of humour, and he expressly tells Mort that notions of “right” and “wrong” or “fair” and “unfair” are not for him, or anybody in his line of work, to consider: “You cannot interfere with fate. Who are you to judge who should live and who should die?”)  Therefore it felt seriously off to me to see Death displaying not merely anger but outright fury when he learns what Mort has done — and duelimg Mort not for sport (which would have been in character) but to vent his fury and in order teach him a ((near-)fatal) lesson.

Then again, Pratchett sure does love to meddle with the bloodlines of nobility, doesn’t he?  Is there a single royal family on the whole of Discworld that doesn’t have the bearers of its ancient blood replaced, either openly or on the sly, by a commoner at some point?  Not counting the odd witch, of course …

Well, at least now I know part of the back story of Hogfather, though.  And I’m still vastly enjoying this journey through the Discworld universe from the very beginning!  After thoroughly having enjoyed several of the later books, it still feels only right to finally catch up with how it all started.