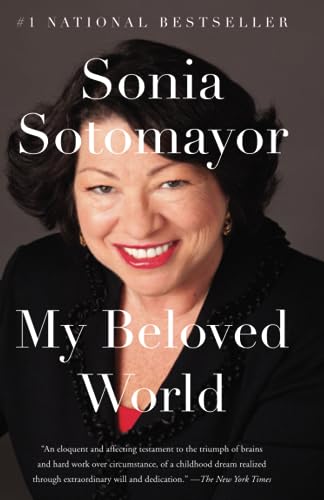 What a courageous woman!

Justice Sotomayor’s memoirs of her upbringing in the New York Puerto Rican community, and her unlikely, but doggedly pursued path to Princeton, Yale Law School, and ultimately, the Federal Bench — fulfilling a dream that had, oddly, started by watching Perry Mason on TV as a child.

Sotomayor is a trailblazer in every sense of the word — a passionate advocate for women, Latinos/-as (not just Puerto Ricans), those hindered in their career path by a pre-existing medical condition (in her case: diabetes), and more generally, everybody up against unequal odds.  I wish she hadn’t finished her book with her appointment as a judge, though I respect the reasons why she decided to do so; and even so, hers is a truly impressive, inspiring story of overcoming a multitude of crippling conditions (type-1 diabetes, poverty, racism, and teachers discouraging rather than inspiring her, to name but a few) to chart out a path in life that even most of those who didn’t have to overcome any of these odds would not dare to aspire to.

Throughout the narrative, Sotomayor’s genuine empathy with and care for her fellow human beings shines through on many an occasion; not only for her family and friends, and for those disadvantaged by society, but for everybody she encounters — until and unless they rub her the wrong way, in which case they will find themselves at the receiving end of a tongue lashing or two.  What particularly impressed me was that Sotomayor, though a staunch defender of Affirmative Action, repeatedly chose not to seek positions as a minority candidate but on a more neutral ticket, fearing she might unduly be buttonholed otherwise.  That sort of thing takes great strength and belief in the universality of her message. — Fiercely intelligent and never satisfied with second best (for herself and others alike), she nevertheless comes across as eminently likeable and open-minded: On the list of people I’d like to meet one day (however unlikely), she shot right up to a top spot after I’d read this book; in close vicinity with Michelle Obama.