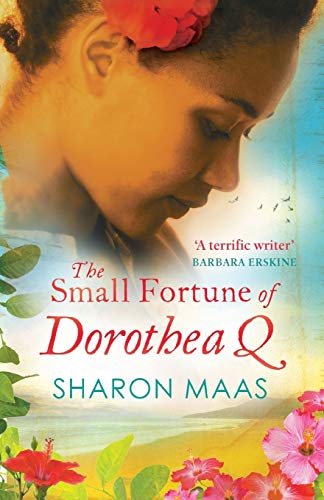 When Sharon Maas first made it known to her then-agent and then-editor that she was thinking about writing a book set in her native Guyana, she met with blank incomprehension and utter rejection: “Guyana? Whyever would anyone write about that little backwater country; a place nobody knows anything about and which probably at least half her projected readership wouldn’t even be able to correctly point out on a map? No no no,” she was told, “stick with what is safe and what people know. And if you want to write a book set in an exotic location, write something set in India. You know India, right? You’ve lived there – so you can just as credibly write about that. And there are plenty of people out there who do want to read books set in India. It’s even a sort of literary trend these days. You’ll fit right in.”

Sharon’s response, after actually having published three books in which Indian settings played a crucial role, was to refuse to work with anybody who was not open to her own ideas about the construction and settings of her books; even if that meant not having any literary agent at all, nor a publisher, for the foreseeable future. The one thing she did not do, however, was stop writing. And looking for a new publisher, who would accept her without any preconceived notions about which niche to fit her in. Over a decade after the publication of her third novel, The Speech of Angels, she finally struck gold – so now here it is, the book (or first of several books, as it’s since turned out) that might never have gone to print if its author had not finally found a publisher willing to take her on solely on the strength of her writing, and accept the chosen setting as an asset rather than a burden.

I’m not even going to pretend that I am able to write objectively about Sharon Maas’s books: I instantly fell in love with her writing when I read her debut novel, Of Marriageable Age, more than 15 years ago, and we’ve known each other for about as long; not always as intimate friends, but well enough for me to always appreciate the special person that Sharon is. I do believe, however, that she has come into her own with The Small Fortune of Dorothea Q. more than with any of her previous books, and the key role that Guyana as a setting, and the main characters’ Guyanese background, plays in the construction of the story clearly has something to do with this – not in the sense of the old cliché “write what you know”, or even straightforward autobiographical writing, but in providing an added authenticity which nothing but personal experience and insight can provide.

As a matter of fact, Sharon managed to sneak Guyanese settings into two of her previous novels as well, in giving several of her main characters Guyanese backgrounds.  In both books’ cases they are Indian Guyanese, not Afro-Guyanese, however, and one of them (Sarojini in Of Marriageable Age) at one point comes to realize that “[s]he might be without country, without nation, but inside her there was still a being that could exist and be free, that could simply say I am without adding a this, or a that, without saying I am Indian, Guyanese, English, or anything else in the world” – that it is, in other words, solely the individual who counts, not that individual’s background, upbringing or nationality. Towards the end of The Small Fortune of Dorothea Q., however, one of this story’s main characters – Rika, who has spent a lifetime running away from Guyana after a cataclysmic event drove her away at age 16, and who has tried hard to make a new life for herself and her daughter in London ever since – brings closure to her own story by declaring to her daughter Inky that “It’s time to go home”: to Guyana she means, and to the family and the life she has left there, and pick up and untangle all the threads she left behind all those years ago.

Structurally, The Small Fortune of Dorothea Q. resembles Of Marriageable Age insofar as both novels consist of several narrative strands that start out independently and are interwoven more and more closely as the novel progresses. Unlike in Sharon Maas’s first novel, however, in this one we know right from the start that the three main characters are grandmother, mother and daughter, and also that there is a huge undeclared and unresolved breach between Dorothea (the grandmother) and her daughter Rika which needs to be healed. And in a sense the book begins with the end of their story, or rather, with the onset of its last, decisive phase, when towards the end of her own life Dorothea decides to move to London, to stay with the daughter from whom she hasn’t heard in almost two decades (and even back then, only to say that she, the daughter, now has a new family of her own in London and doesn’t wish for any further contact with the family she has left behind in Guyana), and with a granddaughter, Inky, who last wrote to her before she, Inky, became a teenager.

Dorothea brings with her the one item of value that has come down to her from her deceased husband’s family: A rare stamp, twin to the [real] 19th century British Guiana 1c magenta (which is widely held to be the most valuable stamp in the world **), and thus worth actually much more than the “small fortune” that Dorothea insists it embodies – as a family heirloom, at that; a thing to be treasured for sentimental reasons much more than for its sheer inconceivable monetary value. But while The Stamp, once word of its existence and value has gotten out in mercenary modern-day London, jerks the three women on a trajectory of its own, it remains clear virtually from the start that only the long-overdue reconciliation between Dorothea and Rika will bring closure to both their lives, and in this, The Stamp for the longest time is an added hindrance, not a catalyst for good.

I fell in love with Sharon Maas’s writing all those years ago over her ability to whisk me off to places far removed from my own, both geographically and mentally (and geographically speaking, what better destination than lush, tropical Guyana, which has come alive for me through her as it could never have otherwise?) – and nevertheless instantly within my reach, chiefly because of the skill, empathy and warmth that she brings to creating her characters, big and small alike. All of that was there right from the start in Of Marriageable Age, and it is still there, and even more so, in The Small Fortune of Dorothea Q. Sharon has come home as a writer – and we, her readers, are the better off for it, too.

** In a postscript, Sharon Maas reveals that her inspiration for writing this book was the fact that the signature initials on the real 1856 British Guiana stamp – placed there on the postmaster’s orders as a safeguard against forgery, as the stamp was one of a batch printed locally and of poor quality – are those of her own mother’s great-grandfather, himself then an employee with the British Guiana postal services; and that the stamp was actually referred to as being worth “a small fortune” in her family. “And there we have it,” Sharon comments, “the spark of a story.” And what a story indeed!

0 thoughts on “Sharon Maas: The Small Fortune of Dorothea Q.”