“At first sin is a stranger in the soul; then it becomes a guest; and when we are habituated to it, it becomes as if the master of the house.” – Tolstoy.

Although not originating from the bible, the concept of deadly sins is almost as old as Christian doctrine itself. Theologians like 4th century Greek monk Evagrius of Pontus first compiled catalogues of deadly offenses against the divine order, which 6th century Pope Gregory the Great consolidated into a list of seven sins, which in turn formed the basis of the works of medieval / renaissance writers like St. Thomas Aquinas (Summa Theologiae), Geoffrey Chaucer (The Canterbury Tales), Christopher Marlowe (Dr. Faustus), Edmund Spenser (The Faerie Queene) and Dante Alighieri (Commedia Divina / Inferno). And in times when the ability to read was a privilege rather than a basic skill, the depiction of sin in paintings wasn’t far behind; particularly resulting from the 16th century’s reformulation of church doctrine, the works of artists like Hieronymus Bosch and Pieter Bruegel the Elder brought the horrific results of humankind’s penchant to indulge in vice back into general consciousness with surrealistic eloquence, reminding their viewers that no sin goes unseen (Bosch, The Seven Deadly Sins) and that its commission leads straight into a hell reigned by gruesome, grotesque demons and devils whose sole purpose is to torture those fallen into their hands (Bosch, The Hay-Wagon and The Last Judgment; Bruegel, The Triumph of Death, The Tower of Babel, and The Fall of the Rebel Angels).

More recently, the seven deadly sins have been the subject of Stephen Sondheim’s play Getting Away With Murder and a ballet by George Balanchine (Seven Deadly Sins); and on the silver screen the topic has been addressed almost since the beginning of filmmaking (Cabiria [1914], Intolerance [1916]). Thus, Se7en builds on a solid tradition both in its own domain and in other art forms, topically as well as in its approach, denouncing society’s apathy towards vice and crime. Yet – and although expressly referencing the writings of St. Thomas Aquinas, Chaucer and Dante – David Fincher’s movie eschews well-trodden paths and grabs the viewer’s attention from the beginning; and it does so not merely by the depiction of serial killer John Doe’s (Kevin Spacey‘s) crimes, which could easily degenerate into a mindless bloodfest that would defeat the movie’s purpose. (Not that there isn’t a fair share of blood and gore on display; both visually and in the characters’ dialogue regarding those details not actually shown; but Fincher uses the crimes’ gruesome nature to create a sense of stark realism, rather than for shock value alone.) In addition, Doe’s mindset is painstakingly presented by the opening credits’ jumpy nature, his “lair”‘s apocalyptic makeup and his notebooks, all of which were actually written out (at considerable expense), and whose compilation is shown underlying the credits. The movie’s atmosphere of unrelenting doom is further underscored by a color scheme dominated by brown, gray and only subdued hues of other colors, and by the fact that almost every outdoors scene is set in rain. Moreover, although screenwriter Andrew Kevin Walker explains on the DVD that the story was inspired by his observations in New York (and the movie was shot partly there, partly in L.A.), it is set in a faceless, nameless city, thus emphasizing that its concern isn’t a specific location but society generally.

Central to the movie is the contrast between world-weary Detective Somerset (Morgan Freeman) who, while decrying the rampant occurrence of violence in society, for much of the movie seems to have resigned himself to his inability to do something meaningful about this (and therefore seems to accept apathy for himself, too, until his reluctant final turnaround), and younger Detective Mills (Brad Pitt), who fought for a reassignment to this particular location, perhaps naively expecting his contributions to actually make a difference; only to become a pawn in Doe’s scheme instead and thus show that, given the right trigger, nobody is beyond temptation. As such, Somerset and Mills are not merely another incarnation of the well-known old-cop-young-cop pairing. Rather, their characters’ development over the course of the film forces each viewer to examine his/her own stance towards vice.

Morgan Freeman and Brad Pitt perfectly portray the two detectives; while Freeman imbues his Will Somerset with a quiet dignity, professionalism and learning, muted by profound but not yet wholly irreversible resignation, Pitt’s David Mills is a brash everyman from the suburbs with an undeniable streak of prejudice, a penchant for quick judgment and a thorough lack of sophistication, both personally and culturally. Notable are also the appearances of Gwyneth Paltrow (significantly Brad Pitt’s real-life girlfriend at the time) as Mills’s wife Tracy and ex-marine R. Lee Ermey as the police captain. Yet, from his very first appearance onwards, this is entirely Kevin Spacey‘s film. Reportedly, Brad Pitt especially fought hard for his casting; and it is indeed hard to imagine Se7en with anybody other than the guy who, that same year, also won an Oscar for portraying devilish Keyser Söze in The Usual Suspects: No living actor has Spacey‘s ability to simultaneously express spine-chilling villainy, laconic indifference and limitless superiority with merely a few gestures and vocal inflections.

While Se7en can certainly claim the “sledgehammer” effect on its viewers sought by its fictional killer, the punishment meted out to Doe’s victims – taking their perceived sins to the extreme – pales in comparison to that awaiting sinners according to medieval teachings. (Inter alia, gluttons would thus be forced to eat vermin, toads and snakes, greed-mongers put in cauldrons of boiling oil and those guilty of lust smothered in fire and brimstone.) Most serial killers also have decidedly more mundane motivations than Doe. And after all, this is only a movie.

“Sin … engenders vice by repetition of the same acts, [clouding the conscience and corrupting the judgment.] Thus sin tends to reproduce … and reinforce itself, but it cannot destroy the moral sense at its root.” Catechism of the Catholic Church (1994) Pieter Brueghel the Elder: The Fall of the Rebel Angels (1562) 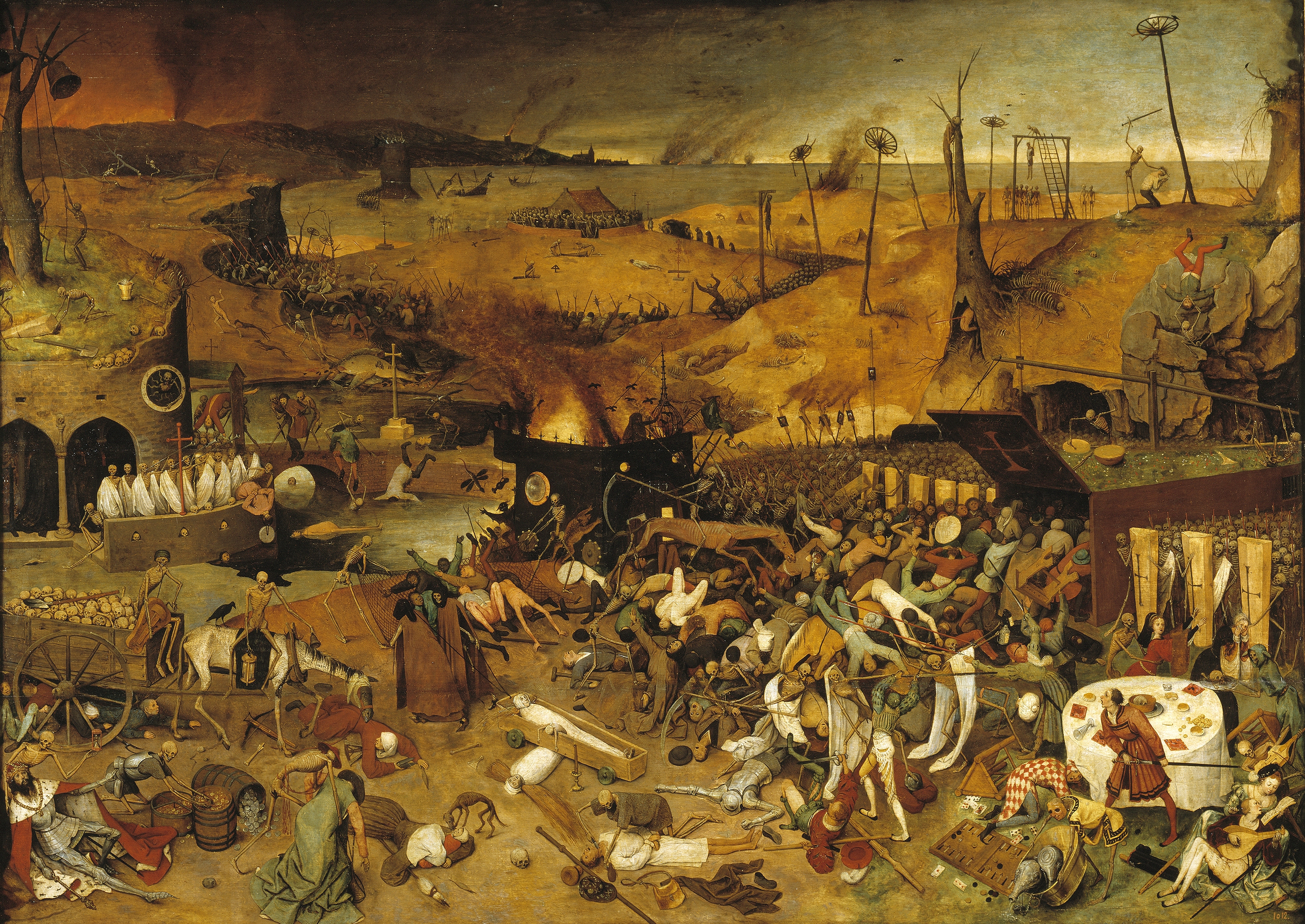 Pieter Brueghel the Elder: The Triumph of Death (c. 1562) 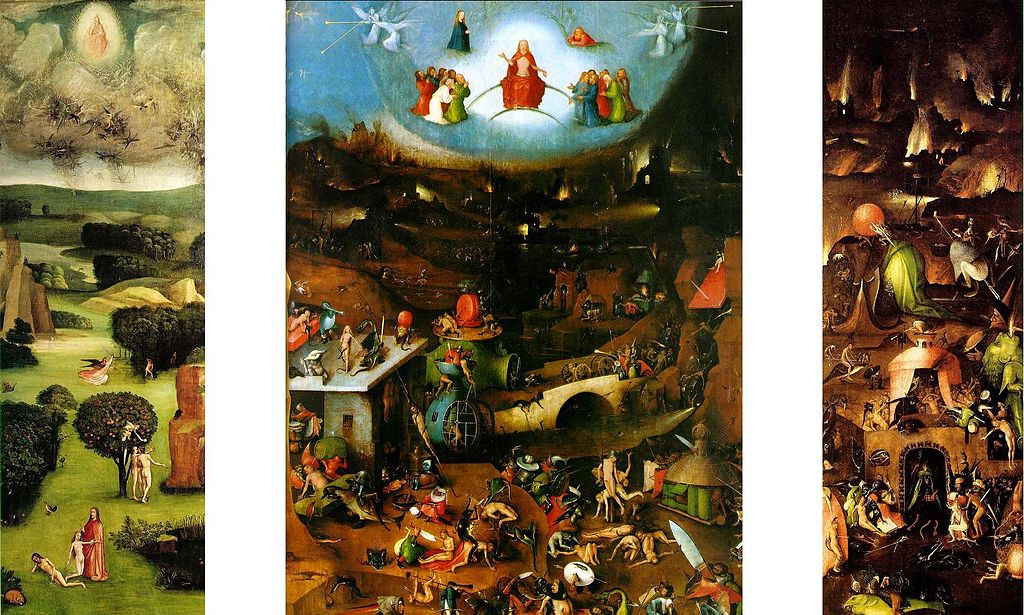