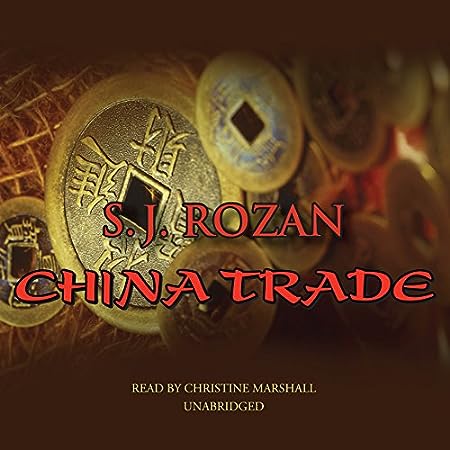 A monumental shout-out to Hobart, aka The Irresponsible Reader, for bringing this series to my attention by reviewing some of its installments in the good old BookLikes days.  I know that I am shamefully late to the party, but now that I’m finally here, I’m here to stay.

China Trade is the first book of S.J. Rozan’s Lydia Chin and Bill Smith series: Told alternatively from either of the two protagonists’ perspectives, the series chronicles the investigations of a New York-based pair of detectives — in this first installment, manifestly not (yet?) a couple, though Bill would very much like that to change.  China Trade is narrated from Lydia’s POV and concerns a burglary, fraud, and murder(s) associated with a collection of Chinese pottery that had been left to a small, charity-based neighborhood museum.  As a police (or rather, private detective) procedural, the novel is competently enough written, but what truly stands out here is Lydia’s background as a Chinese American, and her inner conflict of being, on the one hand, the unmarried daughter of a traditional Chinese family, still living at home, constantly having to appease her haranguing mother and her attorney brother (who of course does not live at home any longer — he’s a man, why should he?), doing her share of household chores, and battling the expectation that she will soon “settle down”, leave “that nonsense” (her detective agency) behind and finally get married — and on the other hand, living the life of a private detective in a modern American metropolis, moving between racial and, in this novel, tong (Chinese mob) battle lines, asking uncomfortable questions of powerful people who have absolutely no desire to answer them, and knowingly risking her own life and taking the risk of physical violence of the most vicious sort (the traces of which she will then somehow have to hide from her family, if she wants to avoid the additional ordeal of yet another grilling at the hands of her mother and her brother as to her nonsensical, sinful ways and the preferability of marriage and family life, which after all is the preordained, expected path for a Chinese woman of marriageable to begin with).  All this comes across with a great deal of authenticity — which is an even greater authorial feat as Rozan has no Chinese background herself whatsoever — and although I know that half the books are told from Bill’s not Lydia’s perspective, it is this in particular which makes me look forward to the series’s further installments.  (Well, OK, now that I’ve met him, I do also want to find out more about Bill … and his take on Lydia, of course.)