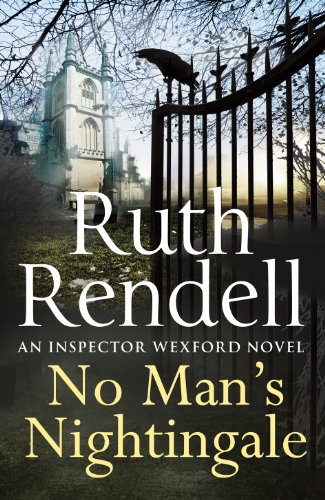 Agatha Christie famously once commented that, had she foreseen the lasting popularity of Hercule Poirot, she would not have made him a man already in mid-life in the book marking his first appearance – and the beginning of Christie’s own literary career –, The Mysterious Affair at Styles (1920). The awkwardness of that situation, from the writer’s point of view, would come to be even greater in the case of Miss Marple, who even at her first appearance in 1930’s Murder at the Vicarage was already an elderly lady; a character partly inspired by Christie’s own grandmother. Maybe Ruth Rendell should have heeded that thought when she was writing From Doon With Death, the 1964 novel which, in turn, marked both her own literary debut and Inspector Reginald Wexford’s first appearance. For Wexford, too, came to his readers ready-made as a Detective Chief Inspector; i.e., a police officer of advanced rank and a corresponding degree of maturity. Yet, as in the case of Agatha Christie’s famous detectives, readers did not seem overly bothered by the fact that over the course of the decades Wexford did not age in real time, and indeed, he at least did age more noticeably than Hercule Poirot and Miss Marple, both of whom remained essentially unchanged even as the world around them changed a great deal. Rendell’s career as a writer thrived on the basis of the Wexford novels as much as it did on the basis of her stand-alone mysteries and thrillers, many of the latter published under the pen name Barbara Vine. British TV also went on to produce a long-running TV series, starring George Baker as Wexford and Christopher Ravenscroft as his sidekick, Inspector Mike Burden; in both actors’ cases, arguably still the roles for which they are the most widely known.

Eventually, however, retirement is bound to catch up even with a fictional detective of Wexford’s staying power. Already at the publication of the 2009 mystery The Monster in the Box, an interview given by Rendell herself fostered the notion that this was going to be her last Wexford book. That turned out to be wrong, or in any event Rendell changed her mind; however, in the follow-up novel The Vault, Wexford had retired. No Man’s Nightingale (2013) is the second novel in which Wexford is consulted by Burden, now his successor and himself a Detective Superintendent, in connection with a murder case, and brought in as an unpaid so-called Crime Solutions Adviser (whatever precisely that may be).

In terms of setting and plot, this novel is classic Wexford territory, and not only because it is (of course) set in Wexford’s home town of Kingsmarkham, a fictional Sussex Downs market town in easy reach of both London and the coast: As has so often been the case in the past, again Wexford and Burden are investigating a murder that forces them to contemplate issues of racism, sexism, and the comparative virtues of tradition and modernity, this time because the murder victim is Kingsmarkham’s new vicar, a woman of mixed-race background and the single mother of a daughter whose paternity she has kept even from the girl herself. When not looking for clues, Wexford – unlike Burden an erudite reader – is also, probably not coincidentally, making his way through Edward Gibbon’s The History of the Decline and Fall of the Roman Empire, which serves to him as an occasional point of reference with regard to individual events or details of another person’s character, though thankfully Rendell refrains from hitting the reader over the head with any heavy-duty symbolism; by and large the references are tangential in nature. For all of these reasons, and also because Rendell’s powers of characterization are still as excellent as they have always been, I found myself right back in Wexford’s world, although I hadn’t read a book from the series in quite some time – indeed, in many respects, reading this book felt like slipping into comfortable, well-worn clothes and settling down in a cozy warm armchair or on my couch, feet propped up, with my cat on my lap and a mug of tea on a table next to me.

Yet, the pleasure was not as unmarred as in many of Rendell’s prior books (Wexford or non). Leaving aside that there is a subplot involving the family of the Wexfords’ cleaner which, though nicely executed in and of itself, left me wondering until the end where exactly lay its indispensable significance in furthering the main plot, conceptually I kept wondering whether Rendell had not, indeed, better left well enough alone (with the Wexford cycle, that is, not given up writing as such) when she sent the series’s protagonist into official retirement from the police force. For what with Burden now himself advanced in rank, it hardly seems fitting to still see him slipping into the role of Wexford’s junior officer as soon as his former boss is around, let alone feeling compelled to bring Wexford in to solve the mystery at all, in an ill-defined, neither truly official nor truly unofficial capacity (even though I can see that he would want to discuss the case – the details that he is able to share with an outsider, that is – over a glass of wine). For the same reasons, it struck me as somewhat contrived that it would (of course?) not only end up being Wexford who ultimately solved the crime, but also that Burden, supposedly because as chief investigating officer he found himself in the public eye and under pressure to produce a result (i.e., a suspect), would not only fail to pursue the avenues of thought embarked on by Wexford but even oppose embracing those lines of thought, only to crumble and make a 180-degree turn just in time before the novel’s end.

This is not to say that, once a fictional detective has reached retirement age, a series must necessarily end, but it is a watershed moment, and one that must be overcome convincingly in order for the series to be able to continue. Ian Rankin and Michael Connelly have both chosen to bring their main characters back into the police force officially, though not in the same capacity as before. Tony Hillerman made his Joe Leaphorn, once retired, a private consultant, who would come to be sought out by individuals involved in a given mystery seemingly independently from the police, though at the same time the police also would be called into action and soon enough, the two narrative strands would come to be intertwined. P.D. James, who likewise sent her Commander Dalgliesh into retirement at the end of The Private Patient (2008), said in an interview at the time of the novel’s publication that she felt she had accomplished all that she had set out to do as a mystery writer, and she hinted that she was at the very least not sure that there still was a place for any further Dalgliesh novels. (As it turned out, there wasn’t.) At the publication of No Man’s Nightingale, Ruth Rendell said, for her part, that she identified with Wexford (“He sort of is me, although not entirely”), which presumably might have meant that she contemplated bringing him back for more after all.  Perhaps it is just as well that she, too, in the end did not have the opportunity: Though I’ve always very much liked Wexford as a person, and there are moments when I sorely need that “comfy clothes and cozy armchair” feeling that reading about Wexford and Kingsmarkham gives me, however atrocious a crime is at the core of the book, Rendell’s final books made me wish she’d given me a more convincing reason why Burden needed to bring Wexford into the case in the first place, and why it had to be Wexford and not Burden who eventually came up with the solution.  I would have been sorry to see Rendell go down the path of contrived writing even further with yet another installment of the series.