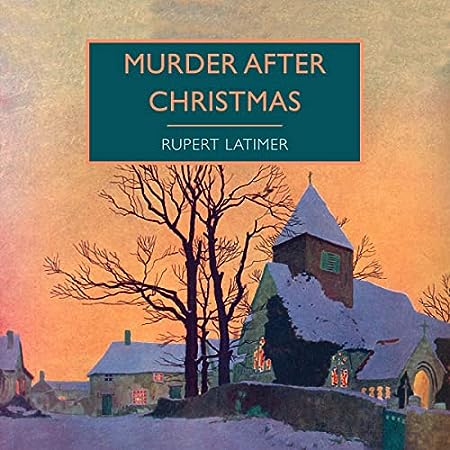 Sigh. This is the first year in which I’m slightly underwhelmed with the BLCC Christmas selection — though conceivably this is largely an “it’s not you, book; it’s me” type of situation.  If you like the sort of farcical humor also to be found in, e.g., George Bellairs’s books, this will very likely be right up your alley.  Alas, Bellairs’s writing style doesn’t really do a lot for me, and as Latimer’s is very similar — same sense of humor, similar characters, same sort of convoluted and at least partly deliberately nonsensical plot (constructed with the aim of concealing an equally nonsensical solution crafted by an author very much “out” to pile twist upon twist) — I quickly found myself equally disenchanted here and basically just finished the book to find out what the heck really had been going on, as I’d stopped caring enough to even try to do any detecting on my own early on.  This is a pity, as Latimer could clearly write and the book does feature a number of genuinely likeable characters — and I’ll gladly concede that the farcical solution he ultimately presents could not have worked with any more straightforward narrative.

Leaving aside my personal grievances in terms of style and plot construction, if the book does have a genuine failing it’s twofold: First of all, though this novel was published in 1944 — i.e., towards the end of WWII — the war hardly impinges on the plot, other than the occasional reference to the fact that the type of luxury food items forming part of a traditional holiday meal are no longer easy to come by, and wasting food is considered an offence (which offence is happily being indulged in nevertheless, however).  Secondly — and I can’t be specific here without revealing a crucial plot element — one of the schemes acted out by the book’s characters would likely not have gone undetected for as long as the author needs it to have remained a secret for the scheme to (almost) work; chemistry would very much have mitigated against it.  And while (as mentioned earlier today in my review of Moray Dalton’s The Night of Fear) I’ve grown very tolerant when it comes to Golden Age authors’ reliance on fashionable but ultimately dodgy scientific theories or phenomena of their day, in this instance we’re not talking about anything of that sort — we’re talking about an everyday fact that even a child is familiar with and the knowledge of which does not require any scientific understanding at all (only the “inner workings” would).

So, three stars because my personal disenchantment has a lot to do with the fact that this just isn’t my sort of book and, given that the writing is competent according to its own lights, it would be unfair to overly burden the rating with my personal stylistic preferences.  But those have to impact my rating to a certain extent, as do the two genuine weaknesses mentioned above.