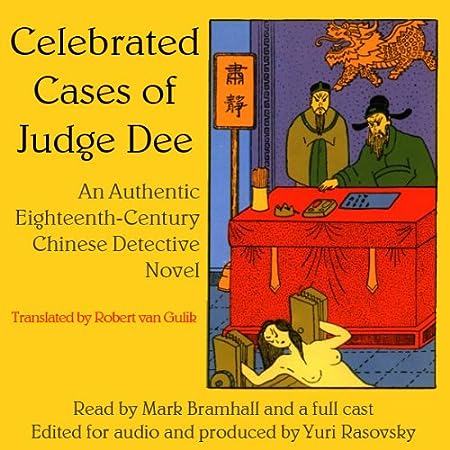 This was “technically” a reread, but as unlike Robert van Gulik’s series of mysteries that were inspired by this book, I had not actually revisited the original novel itself in a minor eternity, almost all of it felt as fresh and new as if I had been reading it for the very first time.

Although writing detective stories was, apparently (as van Gulik explains in his extensive comments on the novel) quite a popular pastime with retired magistrates in 18th century China, most of these books — van Gulik goes on to say — would not have been of great interest to a Western audience; not only would they essentially have to be rewritten entirely in order to bridge the existing ocean-wide cultural gulf; they also had a different structure than the one we are most accustomed in the West:  Rather than constituting a battle of wits between the author (or the detective) and the reader, they chronicle a battle of wits between the detective (the investigating magistrate) and the culprit in a fashion similar to what we have, in the interim, come to know as “inverted” mysteries, i.e. mysteries where the murderer is known from the word “go” (think Columbo and the novels written by Anthony Berkeley under the pseudonym Francis Iles).  This book, van Gulik explains, seemed a more proximate choice at the time of its translation, not only because it involves the type of investigation that we know well from the Golden Age tradition of Agatha Christie and her contemporaries (a puzzle type whodunit, howdunit and whydunit), but also because it is very precise in its application of the relevant provisions of the penal code, the 7th century Tang Code, which was essentially consistent with the code in force at the time when this book was written (the Qing Code), some 1100 years after the events constituting the novel’s plot; so in essence, the same penal rules applied in China for well over a millennium.  (For perspective: This would be equivalent to a medieval Western ruler issuing a penal code that had turned out so well-reasoned, fair, and overall serviceable, that — never mind any and all intervening historical, social, political and economic upheavals, such as the American and French Revolutions, and the associated advances in political and legal thinking — we would still consider it perfectly adequate to apply today.)  I don’t know a lot about the Tang Code, but not only in comparison with Western penal codes, even some of those compiled several centuries later, it does indeed seem to have been a remarkably advanced and well-structured piece of legislation.

So, this turned out quite a revelation on a whole number of grounds.  Structurally, it sets the model which van Gulik, in the series of mysteries that he later wrote himself, inspired by this book, would come to follow as well, in positing a number of unrelated cases that Judge Dee solves more or less simultaneously.  (According to the Tang Code, a Judge was both the investigating magistrate and the official eventually trying the case.)  One of the cases in this book does at least come close to an inverted mystery after all, in that Judge Dee has a very firm opinion as to the guilty party from the start — what considerably vexes him is that he can’t discover the “how” and “why” –; with the interesting procedural sidelight, however, that in the event of a wrongful prosecution not only the defendant’s accuser (the witness who originally brought the case to the judge’s attention), but also the judge himself stood to receive the same penalty as that awaiting the defendant if found guilty: in a murder case, the death penalty … and at one point, believing himself unable to bring the crime home to the person he privately still considers the guilty party, Judge Dee indeed sees no other way than to accuse himself of wrongful prosecution in his report to his superior magistrate. — In the other two cases, the investigation follows similar patterns as those we know from most Western mysteries; the main difference being, perhaps, that the book’s author does not see an early introduction of the true criminal as a major priority; although this does not make the guilty party’s revelation a matter of deus ex machina.  Rather, in all three cases the outcome is the product of an investigation following a logical progression of intellectual and investigative steps; plus, in one case in particular, a remarkable feat of imaginative brainwork on Judge Dee’s part that easily shows him the equal of the Western world’s Sherlock Holmes and Hercule Poirot.  (This case even shares one other highly distinctive feature with one of Sherlock Holmes’s most celebrated cases.)

One content warning has to be given: The Tang Code, advanced and balanced as it was in many other respects (especially considering when it was first promulgated), did allow certain forms of torture to bring about a confession (with strict limitations, but to a defendant subjected to these measures, that would obviously not have made one iota of difference); and similarly, there were more or less painful methods of administering the death penalty.  And although van Gulik asserts that another reason why he chose this book is that it doesn’t revel half as much as many of its contemporaries in the administration of these procedures, there are scenes — comparatively brief, true, but still — where the reader learns what precisely is done to the accused, and is not left in the slightest doubt just how painful these procedures are.  I ultimately took those passages as part of the historical document, and my overall rating is as much one of van Gulik’s scholarship and the excellence of his translation as it applies to the translated work as such (which, after all, I have to take on faith anyway), but if this sort of thing overly bothers you, you’re probably better served with van Gulik’s later original mysteries, which (though not entirely eschewing the issue) are just a tad gentler to modern Western sensibilities.