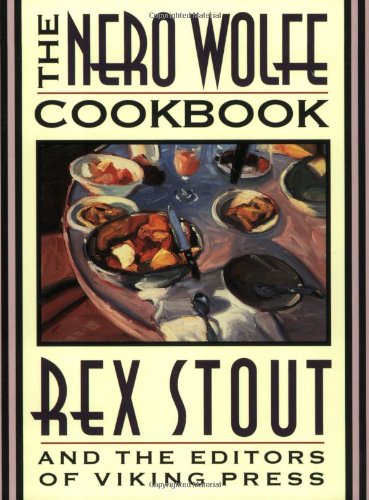 Invitation to the Brownstone

“I beg you not to entrust these dishes to your cook unless he is an artist. Cook them yourself, and only for an occasion that is worthy of them. They are items for an epicure, but are neither finicky nor pretentious; you and your guests will find them as satisfying to the appetite as they are pleasing to the palate. None is beyond your abilities if you have the necessary respect for the art of fine cooking – and are willing to spend the time and care which an excellent dish deserves and must have. Good appetite!”

The above quote from the account one of Nero Wolfe’s first investigations (“Too Many Cooks,” 1937) serves as one of several introductory notes to this compilation of recipes from Rex Stout’s famous mystery series involving the New York epicurean, orchid lover and heavy-weight detective whose exploits have long become as indelible a part of literary history as those of Sherlock Holmes, Hercule Poirot, Miss Marple and Lord Peter Wimsey. And the quote not only sums up to perfection Wolfe’s view of the meals served in his house; it also – consequently – provides a taste of the approach one should adopt in using this cookbook. For unlike many other literature-related recipe collections, “The Nero Wolfe Cookbook” need not rely on a great many third-party sources to determine what the great detective might have consumed; a key part of the mysteries themselves are the descriptions of Wolfe’s meals, and Wolfe’s (as well as his Swiss chef Fritz Brenner’s) attitude towards food in general.

All of the recipes presented here were initially developed by chef Michael S. Romano and tested personally by Rex Stout and New Yorker food critic Sheila Hibben. And it’s all there, from Eggs au Beurre Noir, griddle cakes, and apricot omelet to Fritz Brenner’s various duck, duckling, and pork dishes, Wolfe’s “relapses,” and even the complete menu served by Fritz on the occasion of the annual Ten for Aristology dinner in “Poison a la Carte:” Blinis with Sour Cream (of course without the fatal dose of arsenic someone had added, to Fritz’s eternal horror and shame, to one of the guests’ plates!), Green-Turtle Soup, Flounder Poached in White Wine, Mussel and Mushroom Sauce, Roast Pheasant, Suckling Pig, Chestnut Croquettes, Salad with Devil’s Rain Dressing and Cheese. As you would expect with cuisine as refined as this (and given that we’re talking, after all, about the culinary arts of the early and mid-20th century), not all ingredients are easy to track down or even still available; turtles being the obvious example – and frankly, I don’t quite share Wolfe’s predilection for such things as starlings and marrow dumplings, either. But even foregoing those recipes, there are plenty of others to try your hand at, and to get a flavor of the culinary delights that fueled Wolfe’s and his “legman” and chronicler Archie Goodwin’s investigations.

In addition to the recipes, the book is lavishly garnished with quotes and excerpts from Rex Stout’s – err, excuse me, Archie Goodwin’s – narrations, providing the context in which individual dishes were served, as well as an array of photographs by renowned photo artists such as Norman and Lionel Wurts, Roy Perry, Samuel Gottscho, Andreas Feininger, John Muller, and Bernice Abbot; displaying the New York of the 1930s through the 1950s (by many considered the city’s golden years, and the heyday of Wolfe’s and Archie Goodwin’s career), with brownstones like Wolfe’s on West 35th Street and other fashionable residences (seen both from outside and inside), 5th Avenue, the Financial District and Times Square, the Empire State Building, Central Park and other green spots, Madison Square Garden, Fulton and other markets, the Staten Island Ferry, Grand Central and Penn Stations, and New York restaurants of various degrees of elegance and refinement. Thus, this is much more than “just” a cookbook – in fact, it’s an introduction to Wolfe’s entire world and style of life; tastefully uniting the essence of Archie Goodwin’s manifold accounts in a single volume.

“I have not a great hope that many people will eat superior meals because they buy this book and use it,” cautions Fritz Brenner in his own foreword. “The facts about food and cooking can be learned and understood by anyone with good sense, but if the feeling of the art of cooking is not in your blood and bones the most you can expect is that what you put on your table will be mangeable. … But I do not think this book will make your food any the worse. At least it should help with some of the facts.” And that, after all, is plenty already, I think. So savor, enjoy, and, in Wolfe’s words – good appetite!