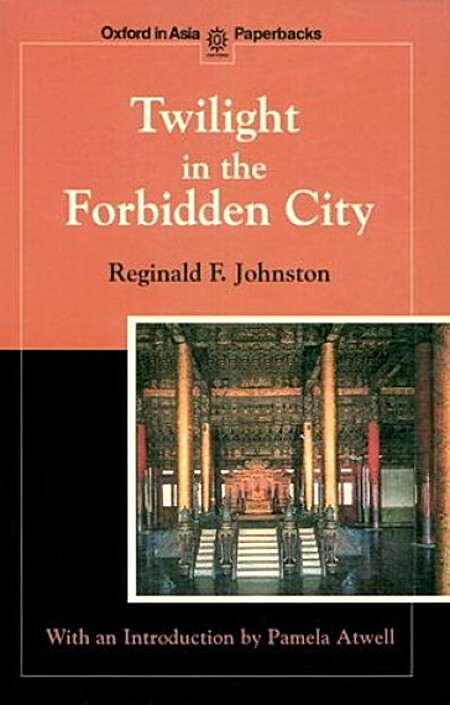 You may have heard that “Twilight in the Forbidden City” is the book that Bernardo Bertolucci’s movie “The Last Emperor” is “based” on. If at all, however, this is true only with regard to the first part of the movie (the book was published in 1934, just as Pu-Yi had ascended the throne of “Manchukuo”), and actually, the book should not be read or understood in this limited sense at all. Primarily, this is the personal account of a British diplomat and scholar of the Chinese history, society and culture who, at some point in his career, was appointed to the (for a Westerner: unprecedented) position of tutor to China’s last monarch. True, those who have seen Bertolucci’s movie will recognize individual events described in this book, such as the Emperor’s birthday and wedding ceremonies (Bertolucci obviously used Johnston’s description of the birthday rituals as a model for the spectacular coronation ceremonies at the beginning of the movie – as Johnston had not yet been made tutor at that point, he could not give an eyewitness account of that event), and Johnston’s constant battle with the corrupt and reactionary palace eunuchs, as best exemplified by the fight over the emperor’s glasses (without which Pu-Yi arguably would have lost eyesight before long).

But Johnston’s book is not merely a biography of the Emperor. Rather, it is an account of the last period of the Manchu empire, and of the Chinese society in the second half of the 19th and the first decades of the 20th century. In addition to the author’s personal impressions gained inside and outside the imperial palace, up to and including Pu-Yi’s dramatic flight from the Forbidden City in 1924, which ultimately ended in the Japanese legation, the book also renders Johnston’s view of the role of the major foreign powers at the time (Japan, Russia, the U.S., Germany and, of course, his native England), and the Emperor’s predecessors and their politics, such as the powerful Empress Dowager Tzu-Hsi (named “the Venerable Buddha”), the reform attempts of the unfortunate Emperor Kuang-Hsü (which earned him, at the age of 28, lifelong humiliation, imprisonment and ultimately death in a tiny and windowless building within the imperial palaces), the Boxer Movement, and the brief and likewise unlucky interlude of the reign of Pu-Yi’s father (Kuang-Hsü’s brother), Prince Chun.

Johnston was a monarchist and fiercely loyal to Pu-Yi personally, so don’t expect him to treat any of the popular movements which ultimately brought the monarchy to an end with much sympathy or at least, objectivity. He probably also underestimated the dangers to China (and the Manchu dynasty) growing out of the Emperor’s re-installment as ruler of “Manchukuo” at the behest of the Japanese. In fact, the very title of this book is designed to reflect its author’s hope that, like the “Rising Sun” symbolized by the Japanese emperor, the Chinese monarchy would soon rise and shine again, too. Equating the 12 years between the establishment of the Chinese republic in 1912 and the Emperor’s expulsion from the Forbidden City in 1924 to a “twilight” period and the 10 years following it to the night, Johnston dedicates the book to Pu-Yi “in the earnest hope that, after the passing of the twilight and the long night, the dawn of a new and happier day for himself, and also for his people on both sides of the Great Wall, is now breaking.” In the book’s introduction, he again emphasizes that “there is a twilight of the dawn as well as a twilight of the evening” and that the dark period witnessed by China might “be followed in due time by another twilight which will brighten into a new day of radiant sunshine.”

This, of course, is not the only prediction where history has proven Reginald F. Johnston wrong. His analysis of the role of some of the key players of the time, for example that of the Empress Dowager Tzu-Hsi, is likewise not undisputed; and he himself has not remained without criticism, either (even at the time of its publication, a major purpose of the book was to defend his own actions and view of the facts). The book must therefore be read with a certain grain of salt. But few Westerners of his time had a knowledge of China equaling his, let alone his opportunities to observe and gain insights within the imperial palace. That, in itself, makes his account a compelling read.