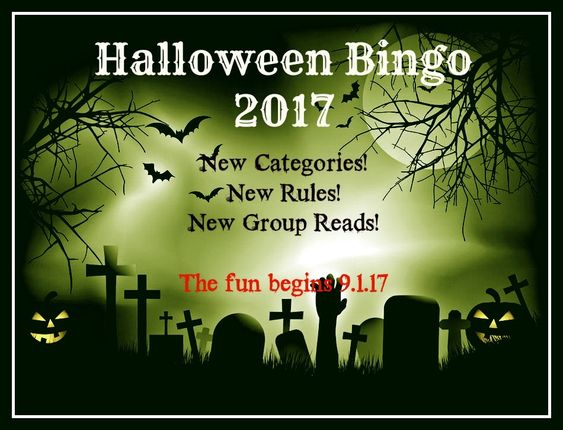 We’re going to be playing our game a bit differently this year!

The first difference is that all of the players will play with a different bingo card! OB & I have come up with 31 reading “squares” that are focused in four broad categories: mystery/murder, horror, Stranger Things (the television show) and supernatural/creature feature. Each card will have a combination of 24 squares, with a free space!

So, how do you get your card? You ask me to create you one! I’ll be announcing all of the categories in tomorrow’s post, and you will be able to request your card with as much or as little specificity as you desire! You can give me the list of 24 squares that you want, you can identify specific squares that you don’t want, you can ask for a focus on one or two of the four broad categories, or you can just let me surprise you! The easiest way to request your card will be in the bingo group, where there will be a thread created for just this purpose!

Next – we’re adding bingo calls to the game! Every other day, starting on September 1, 2017, OB or I will post the “square” that we are calling for the day. You do not need to finish the book before the next call & books can be read in any order. However, to “fill” a square, two events must both have occurred – the square must be called & you must have finished the book! Every square will eventually get called, so everyone will be able to “black out” their card by the end of the game!

Group reads are optional, but are a lot of fun! We’ll be doing two group reads this year, one in September & one in October. The September read will be a classic noir mystery & the October read will be classic horror. Further details will be announced on this later – but the good news is that the group reads will operate as universal matches. You can fill any square with the group read if you participate by reading the book and posting in the group discussion at least once!

This game is just for fun – so no prizes. But the winners get full bragging rights, and reading and playing is its own reward!