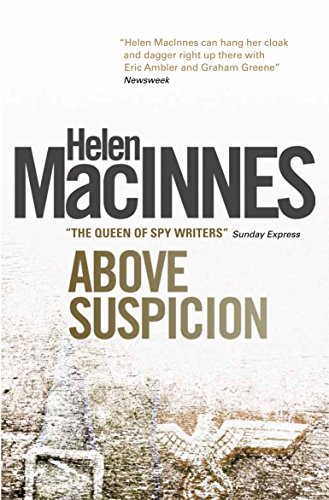 Oh, wow.  I’m only a few chapters in, but this is feeling mighty topical already — even more so given that it’s not historical fiction but was actually published in 1941 (note: it’s set in the summer of 1939):

“‘It is really very sad for a German to find how misjudged and abused his country is.  Of course, our enemies control the Press in foreign countries, and they have been very busy.  They have clever tongues.’

‘Have they?  It is strange, isn’t it, how criticism of Germany has grown even in countries which were once really very close to her.  I wonder how it could have happened.'”

“‘You are a very prejudiced person, I can see.  I suppose you will now lecture me gravely on the wickedness of Germany’s claims to natural Lebensraum.  It is easy to talk when you have a large Empire.’

‘On the contrary, Herr von Aschenhausen, I like to think of all people having their Lebensraum, whether they are Germans or Jews or Czechs or Poles.’

His voice grated.  He was really angry.  ‘It is just such thoughts as these which have weakened Britain.  In the last twenty-five years she could have established herself as ruler of the world.  Instead, she makes a Commonwealth out of an Empire, and they won’t even fight to help her when she has to fight.  She leaves the riches of India untapped; she urges a representative government on Indians who were about to refuse it.  She alienates Italy with sanctions.  She weakens herself all the time and she thinks it is an improvement.'”

“‘Well, I suppose if a nation allows concentration camps, it will find it hard to believe that other people don’t use similar methods.  Cheeer up, old girl, who cares what a lot of uncivilised people think anyway?  It’s only the opinion of the civilised that really matters.’

‘Yes, but it looks as if a lot of the civilised will be killed because they ignored the thoughts of the uncivilised.  Ignoring doesn’t expose them, you know, Richard.'”

“[…] And then bastards like von Aschenhausen come along all smiles and bows.  And wonder why people are not enthusiastic about them.  They blackmailed us with bombers one year, and go back on the agreement they had extorted out of us, and then expect to be welcomed as friends.  All within nine months.”

“There’s nothing like self-pity for thoroughly dissipating a man.  And when a nation indulges in that luxury it finds itself with a dictator.  Wrongs and injustices come in at the door and reason flies out of the window.  It’s a solution which does not flatter the human race.”