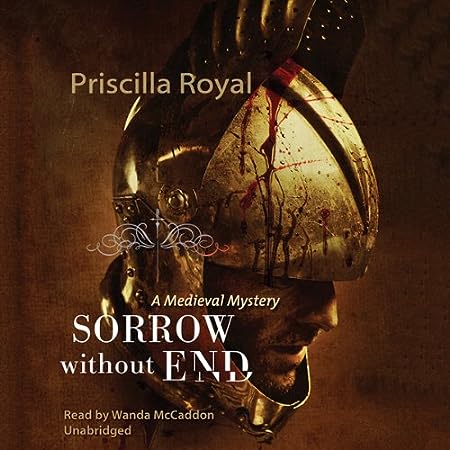 As the autumn storms of 1271 ravage the East Anglian coast, Crowner Ralf finds the corpse of a brutally murdered soldier in the woods near Tyndal Priory. The dagger in the man’s chest is engraved with a strange cursive design, and the body is wrapped in a crusader’s cloak. Was this the act of a member of the Assassin sect, or was the weapon meant to mislead? Ralf’s decision to take the corpse to the priory for advice may be reasonable, but he is soon caught up in a maelstrom of conflict, both personal and political.

The priory is deeply divided over whether to purchase a relic — a decision that endangers both Prioress Eleanor’s leadership and the future of the hospital. Brother Thomas becomes a suspect in the murder, and Ralf must choose between loyalty to a friend and the demands of his brother, the sheriff. Meanwhile, the murderer watches and waits …

Ouf. Forget I ever loftily called Royal’s books “feel-good candy” … this book is nothing of the sort. In fact, it’s a veritable gut punch, more reminiscent of the works of Michael Jecks than Ellis Peters, with a no-holds-barred depiction of war experience-induced insanity and the bloodshed engendered by medieval warfare and the crusading soldiers’ poisoned minds, not only on but also off the battlefield and, in consequence, sometimes even long after their return to England. Sorrow Without End indeed.

The writerly execution of the whole thing is superb — including, by and large, the foray into Brother Thomas’s personal (non-Crusade-related) demons and backstory; and if Thomas, for all his understandable internal conflict, had taken maybe half a mental turn less make up his mind to do the right thing, and if one particular aspect of the plot had not been resolved quite as conveniently in the end, I’d have given this book an even higher rating. Even as it is, though, it feels like it has kicked the series into a higher gear in one single go. I just hope Royal is going to be able to maintain this standard; in many respects, it’s really first class.