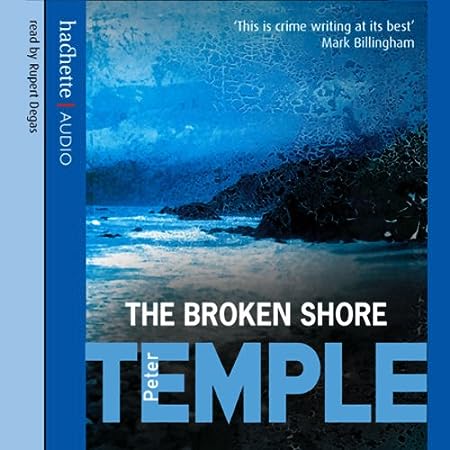 This is the first book of Peter Temple’s second series, after the Jack Irish books (set in Melbourne); here, featuring a burned-out cop named Joe Cashin, who has returned to the place where he grew up — a [fictional] small town on the coast of Western Victoria — to lick his wounds and, while doing so, man the town’s one-person police station and fix up his broken-down childhood home.

Temperamentally and in terms of his past history, Cashin is a brother in spirit to Jack Irish: one a burned-out cop, the other one a disbarred lawyer and recovering alcoholic, both seeking refuge in manual labor in the struggle against their inner demons (Jack Irish’s passion is intricate woodwork); indeed, but for the change of scenery, one wonders why Temple felt it necessary to create a new character to tell this particular story to begin with.  (And even in terms of setting, the necessity is not immdiately apparent, as Joe Cashin finds himself back in Melbourne in the latter part of The Broken Shore, whereas Jack Irish spends a good deal of time in the rural splendors not only of Victoria but also the neighboring provinces.)  Oh, yes — and while Jack Irish hangs around with horses every so often, as his one steady job consists in doing the legwork for a major mover and shaker in the Australian horse racing scene, Joe Cashin’s constant companion are his dogs, who in fact get star billing in the book’s opening scene.

Character similarities aside, this is an engaging tale of corruption, rural prejudice and racism, directed against members of Australia’s indigenous people as much as against other outsiders of society, and ending in a look at yet another aspect of society’s sordid underbelly (with overtones of Ian Rankin’s Dead Souls, Lorenzo Carcaterra’s Sleepers, and interestingly, also another recent read of mine, Martin Edwards’s Gallows Court), told in Temple’s terse, clipped, pull-no-punches trademark style; not one bit more cheerful than the Jack Irish books, but well-observed and (for all I can judge, which from a distance of several decades admittedly isn’t a lot) probably only too accurate.

For an extra treat, have a listen to the audio version narrated by Rupert Degas — though be warned, this isn’t the way you should first encounter the book, as the audio is an abridged one, and — besides the fact that Temple’s style doesn’t easily lend itself to abridgements anyway, as he really does make every word count — whoever did the abridgement cut out a fair bit of the material on Cashin’s backtround, which makes it a bit hard to get into the story and find your initial bearings.  So the audio is best enjoyed after you’ve actually read the book in another medium.