Peter Høeg: Tales of the Night 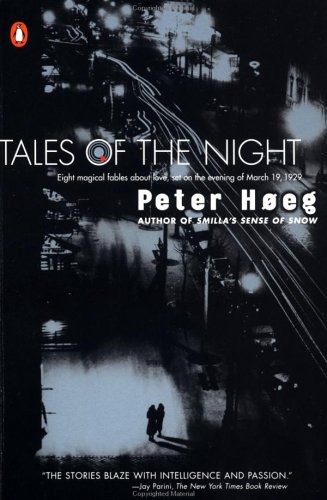 Bridges Built out of Yearning

“The great systems that inform the world about the truth and life invariably claim to be absolutely truthful and well-balanced. In reality they are quaking bridges built out of yearning.” Thus, the protagonist of this short story collection’s last entry, Reflection of a Young Man in Balance, sums up what he has come to learn about love, and life in general. However, these could also be the words of almost any character in any of the other tales told here: Admittedly or unadmittedly, they are searching for something, for a defining point or experience in life, and all of them see their lives profoundly unbalanced by that experience.

Taking “love and its conditions on the night of March 19, 1929” as his point of reference and as a link between the otherwise unconnected eight stories, Peter Høeg takes his readers from Denmark around the world to Paris, Lisbon and Central Africa. In a language and in settings somewhere between Dinesen (the obvious comparison), Conrad, Hemingway, Wilde and Poe, the author of Smilla’s Sense of Snow (or Miss Smilla’s Feeling for Snow, as it is called in Britain) takes a look at the human condition, society in the first decades of the 20th century, and the dichotomy of science and sentiment, experience and emotion, logic and love.

In Journey into a Dark Heart, a historic train ride in Central Africa turns into a life-changing adventure for a young, disheartened mathematician, with travel companions such as German war hero General von Lettow-Vorbeck, traveling writer Joseph Korzeniowski (a/k/a Joseph Conrad, whose Heart of Darkness provides the obvious inspiration for more than just the story’s title) and an African servant girl with her own surprise in store for the three men.

Hommage a Bournonville finds a young Danish ballet dancer on a tiny boat in Lisbon’s harbor, telling the story of his lost love to a dervish of Turkish origin cast together with him by fate.

In The Verdict on the Right Honorable Ignatio Landstad Rasker, Lord Chief Justice, a father chooses the occasion of his son’s marriage to pass on the story how his own father, a renowned jurist and civil servant, faced up to the demons he had suppressed for most of his life, and which his family thereafter promptly continued to suppress.

An Experiment on the Constancy of Love juxtaposes a young woman of means and great beauty, an aspiring scientist with a sheer endless disdain for life, and the man who becomes her suitor from their first childhood meeting on and follows her from Paris to Denmark and back to Paris, until their ambitions and sentiments collide head-on in a fatal experiment she has devised.

Portrait of the Avant-Garde takes a successful, ambitious painter with ties to the rising Nazis to a nightly boat trip into self-discovery off a remote Danish island.

Pity for the Children of Vaden Town is the story of a city’s self-elected utter isolation, and of the pied piper who has come to the town children’s rescue – with abounding reminiscences to the Grimm Brothers, Robert Browning, Hans Christian Andersen and Lewis Carroll.

In Story of a Marriage, a writer discovers that the public image of perfection is often nothing more than that: an image.

And last but not least, in Reflection of a Young Man in Balance, a young scientist discovers the destructively revealing power of a perfect mirror.

Tales of the Night was written and appeared in Denmark in 1990, as Høeg’s second book (after 1988’s The History of Danish Dreams and two years before Smilla’s Sense of Snow), but was published in the U.S. only after the success of his story about the Inuit exile from Copenhagen hell-bent on solving the mystery of the death of a little boy, her only friend. In tone and theme, the two books could not be any more different; yet, like Smilla, Høeg’s protagonists in these tales are loners; outsiders of society, and ultimately, most of them are comfortable in that role and seek solitude rather than social acclaim and popularity. “I learned that it may be necessary to stand on the outside of one is to see things clearly,” the narrator of Hommage a Bournonville tells his Muslim companion, and he could be speaking for many of them. So, while social norms and conventions are an important backdrop for the experiences made by Høeg’s characters, ultimately it is one person in particular, often a loner like themselves, who provides them with the experience that will change the course of the entire rest of their lives.

Peter Høeg tells his protagonists’ stories with as much intelligence as humility, an occasional sense of humor; and most of all, with great empathy, undying even in their most somber moments. Not all of these tales are immediately uplifting (and Høeg’s successor novels continue to explore the dark side of the human existence); but they provide ample food for thought and are not to be missed.