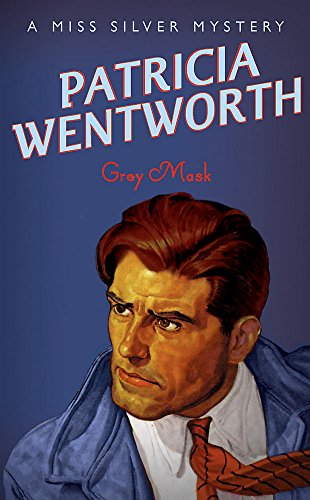 This book marks Miss Silver’s entrance into the annals of Golden Age crime fiction, and it’s certainly an enjoyable one.

I’d read other Miss Silver mysteries before: This doesn’t strike me as a series one absolutely has to read strictly in order; even though it is worthwhile noting that Wentworth also created several other fictional detectives, who even when appearing without Miss Silver clearly operate in the same fictional universe, and they do repeatedly show up in her cases as well.  Most, if not all of these other detectives are former pupils of Miss Silver, who once upon a time used to be a governess, and wherever they do appear alongside her, the ultimate honors of solving the case invariably go to her in the end.  So I guess the one aspect to be aware of is which one (if any) of her fellow sleuths is featured in a given book, and where in the sequence of their collaboration with Miss Silver the book in question is placed. — For those interested, I’ve found a very neat overview on this on a blog called The Passing Tramp.

Anyway, having read other books featuring Miss Silver, I was interested to see how she had initially been introduced, so when there was talk of a Grey Mask buddy read, I jumped at the idea.  And I’m glad I did!

We get to see more of Miss Silver’s (on occasion quite formidable) ex-governess side in the later books, but even in this first venture — where none of the aforementioned other detectives appears — we see her treating a recalcitrant client essentially like the ten-year-olds she used to tutor, and most of her trademark features are already in place: the “gentle cough” that invariably precedes any statement of import; her knitting needles (not the only feature she shares with Agatha Christie’s Miss Marple — both ladies also have a certain penchant for primness, even if both of them are equally capable of taking it with a certain pinch of salt), her neat and capacious handbag, and most importantly, her razor-sharp brain, which easily puts her on a level with Sherlock Holmes, Hercule Poirot … and, again, Miss Marple, about whom none less than (ex-)CID Chief Sir Henry Clithering says in The Body in the Library, and not without reason, that she is “better at [solving crimes] than I am at it”:

“Downstairs in the lounge … there sits an old lady with a sweet, placid spinsterish face, and a mind that has plumbed the depths of human iniquity and taken it as all in the day’s work.”

The same thing might just as well be said about Miss Silver — who however, like Sherlock Holmes and Hercule Poirot, leaves the reader (and the other party to the conversation) in no doubt as to the size of her brains and her capacity of logical thought, whereas Miss Marple outwardly is all flutter and modesty, while nevertheless surreptitiously manipulating others into doing just what she needs them to do … while Miss Silver can be downright facetiously open about it:

“Miss Silver tapped with her pencil.
‘Are you suggesting that we should apply for a search warrant?’
‘No, I’m not.  I’m suggestin’ doin’ a little job of breakin’ and enterin’.  Look here, Miss Silver, are you game? […]’
‘I’ve my reputation to consider,’ said Miss Silver. She coughed. ‘If I were walking along [that particular] Street and were to ring [that house’s] bell –‘ she paused and gazed at him mildly.  ‘If you opened the door to me, it really would not be any business of mine how you got in.'”

And a while later:

“Miss Silver turned her torch down, picked up a metal bar, and put it into [his] hand.
‘What is it?’
‘Well,’ said Miss Silver — she gave a slight cough — ‘I believe it is called a jemmy — an instrument in use amongst burglars.  I, of course, have my reputation to consider. But if you –‘ She coughed again. ‘It really seems quite providential — doesn’t it?’
‘Heaven helps those who help themselves, in fact,’ [he] responded.
Miss Silver proceeded to give him expert advice as to lock-breaking.”

I’m not sure that we’d ever see quite that sort of scene with Miss Marple (Holmes and Poirot are, of course, a different matter; they’ve both been known to burgle the odd building in the interests of higher justice), though Miss Marple would almost certainly have, amid a great deal of flutter, pinpointed the exact location to look for inside the house in question in advance, to within a few inches at most; probably after having gotten the vicar’s wife to unearth for her precisely the same (published) source that had inspired the present owner of the house to make use of that very location in the first place.

Unlike Holmes and Poirot (and, for that matter, Miss Marple), who at least in the Final Reveal typically give a full account of their methods and thought processes, we are not given that sort of access here, and if anything, it is this that makes Miss Silver seem decidedly more ethereal than in the later books — which, at least the ones I’ve read, do feature a traditional Final Reveal; warts and all: Not only does Miss Silver seem in this, her first venture, however, to appear out of nothing in her client’s and the other protagonists’ vista and vicinity on more than one occasion; she also has to do all her own research, since she does not have an assistant, which would have had to involve quite a substantial amount of interviews, visits to libraries, and other “legwork”, all of which at times left me wondering how she could possibly have fitted all that activity into the time frame available … while at the same time keeping exact tabs on her client’s and his protegée’s, as well as pretty much all the other major characters’ whereabouts.

Patricia Wentworth had published several romance novels before turning to crime fiction, and this is not the only one of her books on which that writerly history has left an undelible mark.  (It’s also not the only one of her books where the various emotional conflicts are “resolved” in rather a rushed way at the end.)  As for the book’s major characters (besides Miss Silver), they fall nicely into the categories and types that had already been coined by other mystery authors at the time, and to a large extent made up the stock whose representatives would continue to populate the better part of Golden Age mysteries up to the eve of World War II and beyond.  Still, like the other Miss Silver mysteries I’ve read, this proved to be a quick, entertaining and deceptively lightly-written read, and I’ll happily continue to sprinkle books from this series in among my reading pleasure.