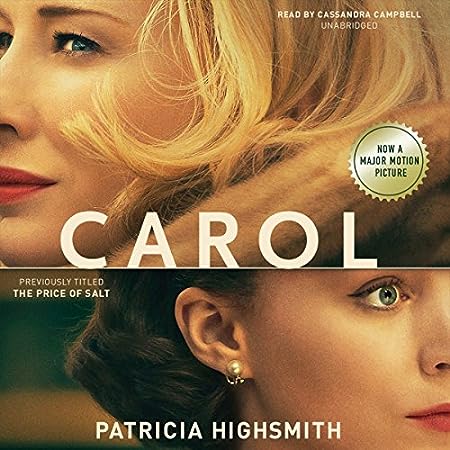 My record with Highsmith’s writing is a mixed one: I found the first Ripley novel (The Talented Mr. Ripley) morbidly fascinating and the sardonic put-down of the arts world in the second one (Ripley Under Ground) oddly amusing, and I obviously love any cat story of hers where a cat gets the better of a human; especially if said human has clumsily been trying and is shown to be monumentally failing in their attempts to sideline the wily feline in the first place.  But I am not a major fan of Highsmith’s approach to her characters, who (e.g. in Strangers on a Train) are almost uniformly unlikeable and, in their majority, even downright jerks — I tend to need at least one person in a book that I can root for; otherwise at some point I start asking myself “why am I reading these horrible people’s story to begin with”?  So, even though I knew that Carol (originally published pseudonymously as The Price of Salt) was based on Highsmith’s own experience, I approached it with a tiny bit of trepidation.

I needn’t have worried.  This book now easily ranks among my firm favorites in Highsmith’s body of work (what I have read of the latter, that is).  Carol is, in the first place, an in-depth portrait of a lesbian relationship, and of the way in which lesbians (and same-sex relationships generally) were seen in 1950s society; but it also asks questions about human relationships generally, and about the social interactions of women with other women, women and men and (to some extent) even men with other men, at least insofar as a woman is “in the picture”, as well as questions about women’s position in the workplace and in society as such.  There is plenty of heartbreak, particularly as a result of the ruthless campaign mounted by Carol’s husband to deprive her of the custody of her small daughter, solely on the grounds of her “inappropriate” relationship with the book’s narrator, Therese.  This campain is not only relentless but of a chilling, downright clinical nature, all of which is way more hurtful and effective than Carol’s husband were foaming at the mouth, as it reveals the struggle for the child as a fundamentally unequal one: The love of a mother who is forced into a desperate cat-and-mouse game that she has few chances to win against the cool calculation of a man who is accustomed to winning, for whom this is not about love at all but about power and possession, and whose only emotion (if any) to enter into the picture is that of a husband whose ego has been pricked by the discovery that, not only did his wife never really love him at all (he already knew that anyway, and it didn’t matter a jot), but even worse, she is “one of those” who seemingly have no use for men in their lives to begin with.  — In all of that, Highsmith may have chosen the narrative perspective of Carol’s young lover Therese rather than Carol herself because that was closer to her own experience, but this, too, only enhances the novel’s emotional power: On the one hand, it allows the reader to gradually understand the complexities in which Carol is caught up alongside Therese’s growing understanding; on the other hand, we are not served Carol’s emotional life on a platter but have to do the legwork ourselves, seeing past her apparently cool and controlled behavior and learning to understand her “from the outside”, like Therese and every observer is forced to do, with all the risks of misunderstandings that this involves.

Yet, along the heartbreak, there is also plenty of love and affection — between Carol and her daughter, between Carol and Therese, and in numerous other respects — and we even get a sort of in-novel road movie highly reminiscent of Thelma & Louise (and which just may have inspired the  iconic1991 blockbuster to some extent; I have no idea whether that was in fact the case, but I wouldn’t be surprised to hear that was; different ending or not).

2 thoughts on “Patricia Highsmith: Carol (The Price of Salt)”