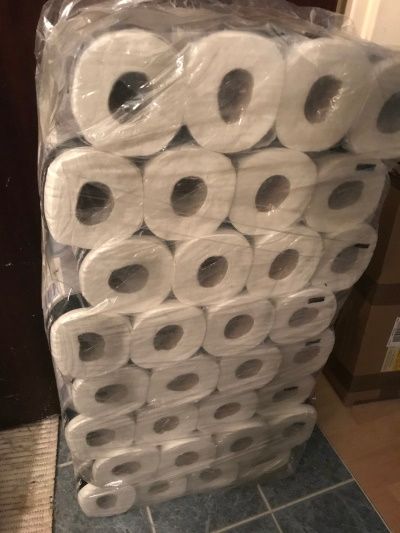 Desperate times call for desperate measures … I’d never have believed I’d ever let a monstrosity like this cross my front door, but with supermarket and drugstore shelves persistently empty in my area (despite rumors that elsewhere in this country, the hoarders have had their fill and stocks are being replenished), the other day when placing an order for office supplies I finally caved, after all, and included this.  Believe it or not, this was the smallest package size they were offering …

The Associated Discussion on BookLikes:

Familiar Diversions
Oh man, I wouldn’t even have room for a package this size in my usual toilet paper storage area. It’d probably have to serve as an extra piece of furniture for a while.

I’m lucky – being a generally anxious person means that when the panic toilet paper buying started in my area, I already had enough on hand to get through weeks, maybe even two or three months. One of the benefits of constantly being worried I’ll run out of stuff and be unable to get to a store, I guess.

Themis-Athena’s Garden of Books
I’m the same way; I always have an extra package, which usually is more than enough. Clearly, these aren’t “usual” times …

And I definitely can’t store this monster in any of the normal places, either. For the time being, it’s sitting right inside my bathroom door! (It’ll be interesting to see how long it takes for the cats to discover its possibilities.)

Portable Magic
Oh no that is going to be an enormous pile of shredded tissue. You’ll never get it all out of the rugs.

Themis-Athena’s Garden of Books
Fortunately, being at home, I hope I’ll be able to catch them before they can do too much damage!

Obsidian Blue
I had to do the same with toiler paper and paper towels. I felt like a jerk, but I had to order some because I did not go out and mass hoard things. I realized this week I was going to run out and I could not find any supplies near me. I went to 4 grocery stores. Then I got worried about infecting myself since I was jumping all over looking for things. Walmart shipped within 3 days. I have them in the laundry room and the upstairs linen closet. I will have enough to get me through July. Sigh.

Themis-Athena’s Garden of Books
Exactly my experience! Lucky you for being able to store your supply in your laundry room …

Obsidian Blue
Yeah I feel better about it, but I hope to never have to do this mess again. I wonder how this is affecting people with smalls square footage and no storage.

Themis-Athena’s Garden of Books
… not to mention the sort of small budgets where you literally have to turn over each penny twice. Yes.

Murder by Death
I’ve subscribed to a service the past year that sells TP made of bamboo and the minimum order is 48 rolls, which lasts us 4 months; the newest supply arrived yesterday. We have to store most of it in the attic because we don’t have any space in this house for anything extra.

Themis-Athena’s Garden of Books
Well, it turns out I easily disposed of my first layer of 8 rolls easily today by handing them over to my mom … 🙂

Mallory Kellogg, Chubbygirlreads
We ended up having to do this. We didn’t buy and toilet paper in February before our vacation since we wouldn’t need it. We could just get it when we come home. Then the world went insane. We get back and there is zero TP anywhere. Finally my husband found a 30 pack of Charmin 2 days ago and paid $34 for it. Outrageous because we only use maybe 4 rolls in 3 weeks. But nobody had ANYTHING except a couple of these massive bulk lots. We now enough for a year because others are freaking greedy or panicking. $34 is a lot for something I hardly have to buy, when I just lost my job. What a time to be alive.

Themis-Athena’s Garden of Books
It is — all of the above. Completely insane.

On a completely different note, it’s good to see you here again!

Tannat
Thanks! I’ve peeked in a few times but just haven’t been able to keep up with things. And I’m still not reading like I used to…

Themis-Athena’s Garden of Books
Sorry to hear that. 🙁 Though these days, it’s hardly a wonder … whatever else may be the cause!

Murder by Death
I was thinking it was great to see you back too Tannat – although I’ve been MIA myself, so I wasn’t sure if you’d been around and we’d just not crossed paths again. 🙂

Tannat
As I said, I’d peeked in a few times, but never managed to keep up with things for longer than scrolling through a few posts. I haven’t been reading at my former speed so I just don’t have much to post myself.

Themis-Athena’s Garden of Books
Many of us are just posting bits and pieces of RL stuff these days. E.g.,, even if you don’t feel like talking about books, you could just join the discussion in the bingo group (which is about considerably more than bingo at the moment) …