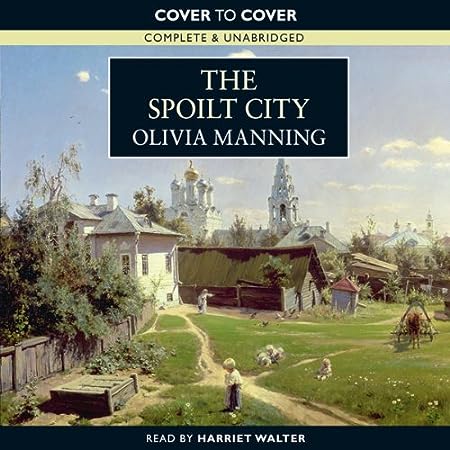 The second volume of Manning’s Balkan Trilogy, which in turn forms the first part of her Fortunes of War story arch (whose second part, equally consisting of three installments, is known as the Levant Trilogy).  The hexalogy is based on Manning’s own World War II expat experience; it was adapted for the small screen in 1987, starring the then-up-and-coming power couple of British film and television (to-be), Kenneth Branagh and Emma Thompson, as the protagonists Guy and Harriet Pringle.  I’d watched (and own) the DVD of the screen adaptation, but had yet to read the books: a gift from a friend, of the Balkan Trilogy‘s lovely NYRB edition, provided the final incentive to begin remedying that fact.

While the trilogy’s first book essentially sets the first two books’ overall scene — Bucharest on the brink of WWII –, introduces us to the story arch’s major characters, and chronicles Harriet’s first steps and experience as the wife of an expat English professor, in The Spoilt City it becomes ever more obvious that war is upon us, and Romania (which, albeit hardly of its own making, barely two decades prior had been one of the territorial “winners” of WWI) finds itself buffeted between the growing agressions of Nazi Germany, the increasingly reluctant and purely nominal “friendship” of the UK, the self-serving stance of Stalin’s USSR (a predator willing to watch others do the dirty work for him and pounce when the field is clear and the victim is lying on the ground defenselessly), and the greed, corruption, and power struggle of the country’s own competing elites.  As in the first book (and the better part of the entire hexalogy), the point of view from which we are observing the events is that of the expats (chiefly Harriet) — people who are “on the ground”, but nevertheless removed from Romanian and Bucharest society; who observe what is going on and whose lives are touched to a certain degree, but nowhere near as dramatically as those of the local population, by the political power struggle within Romania and the consequences of the rise of domestic Romanian fascists, the increasing (and increasingly menacing) presence of representatives of the Nazi regime, the violence in the streets, the dispossession and (judicially sanctioned) murder of well-to-do Jews, the frantic scramble of those who can to leave the country and at least save their own lives (if nothing else), etc.  The British expats have to adapt their lifestyle to some extent: there are certain cafés where they are no longer welcome, and their diet is restricted (most notably, meat is no longer available every day); but for the longest time they are able to stand on their balconies and observe the events, quite literally, looking down onto the streets below like spectators in a stadium.  It is not until the Nazis pick up on a rumor according to which certain members of the British expat community are spies involved in a conspiracy to thwart the fascist takeover of Romania that they are directly and personally attacked — and they are made to leave the country in short order afterwards, with considerably more of their possessions than the displaced Romanians.  Thus, on the few occasions when Manning wants to take the reader into a more immersive experience (e.g., train journeys beset by the panic and chaos of hoards of people fleeing for their lives), she necessarily has to shift the perspective to other characters less able to shield themselves from the violence around them.

This perspective of experiencing the implosion of a society under the pressures of an impending war doubtlessly isn’t everybody’s cup of tea and won’t satisfy those looking for a more immersive reading experience; personally I ‘m finding it fascinating in part just because of its artificial remove from the chaos all around.  For one thing, this is by far not the first book about war, and what it does to civil society, that I have read; and the best of these books make for a harrowing experience indeed which has made me feel blessed repeatedly that I am merely reading about it and not experiencing first-hand what is described on the pages of the book.  This obviously applies, too, to WWII — in addition to which, I have my own family’s narrations to go on as far as that particular war is concerned.  So for me, being educated about war and what it does to the individual and to society at large wouldn’t necessarily distinguish this book as such, though obviously the specific Romanian experience probably still would.  But it is precisely the almost schizophrenic tension arising out of the expats’s being “there but not really there” that adds an extra level of interest to me, simply because it is not the narrative perspective you usually in a book about war.  (That being said, William Shirer’s Berlin Diary has long been sitting on my TBR — I may have to finally move it up a few rungs, if for no other reason than to see how it compares with this hexalogy.)

A final note on the audio version, to which I listened to accompany the printed text, not least because it is narrated by Harriet Walter, whose work in pretty much every medium — stage, screen, print, audio — I greatly respect: If it brought home anything in addition to providing a slightly greater immediacy than merely following the text on the page, it was that Emma Thompson, for all her enormous gifts as an actress, just isn’t the Harriet Pringle of the book, who is petite, a bit angular, dark-haired, and given to bouts of spunkiness (and who would arguably have seemed to be no ill fit for Harriet Walter).  Branagh, on the other hand, is exactly the Guy Pringle who also comes across in the books: intellectual, shy of conflicts (especially those of a personal nature, which he usually leaves for Harriet to solve), pig-headed, generous (not only, and not necessarily always with things that actually are within his gift), and practical only in the pursuit of a goal that he himself deems worthwhile.  (Further side note: I think this is a first in that for once I actually prefer Branagh‘s portrayal over Thompson‘s, albeit on character and not on acting grounds.)

One thought on “Olivia Manning: The Spoilt City”