Festive Tasks, Door 22 — Iconic Figures: To celebrate Santa Claus: read a book that qualifies as a comfort read for you. 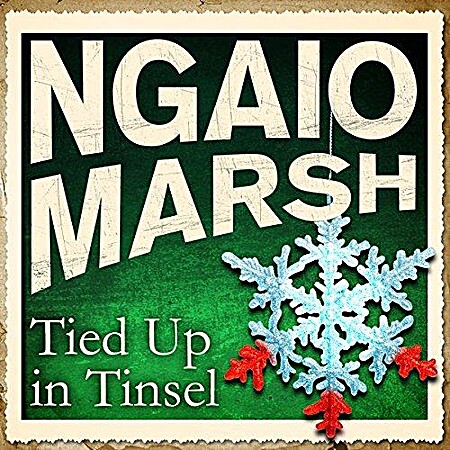 In a year of revisiting the better part of Marsh’s canon, what book could possibly qualify better as a comfort read?  Seeing as this year might as well be subtitled “The Year of Revisiting Ngaio Marsh” (I reread roughly half of her Roderick Alleyn series, plus several of her short stories — not all of them featuring Alleyn — and her memoir, Black Beech and Honeydew), it was only fitting that her Christmas / winter time mysteries should form the conclusion of that repeat visit, as part of this year’s Christmas reading.

Tied Up in Tinsel — although one of Marsh’s final books, published in 1972 — has all the trimmings that you expect from a Golden Age Christmas mystery: a lavish Christmas party taking place at a remote country house, snow in abundance, a narrowly circumscribed cast of eccentric characters, and of course a murder and the subsequent investigation. To this classic mix, Marsh here adds two particular twists that make the book stand out from the rest: (1) the children’s party duly preceding the adults’ festivities is not visited by Santa Claus but by a Celtic (or Germanic?) druid lavishly decked out in gold lamé (doubtless, Marsh’s very own tribute to the Age of Aquarius); and (2) this particular country house’s staff consists exclusively of murderers. Ex-convicts, that is, who (on mitigating grounds) all have either secured a conviction to, or seen their convictions commuted to, something other than the death penalty or life in prison. Because, you see, this particular country house is not owned by one of Britain’s (then) increasingly cash-strapped noble families but by a representative of the newly-rich (fancy double-barrelled last name and all); an arts dealer who, though a bit of a hedonist and not stingy at all when it comes to his personal comfort and to obtaining the things he truly likes, has found the more typical members of “Downstairs” staff severely opposed to the idea of moving to the out-of-the-world location far from London that he has decided to acquire and refurbish in much luxury — so he’s had to compromise and make do with what he could find instead, while trying to put a positive spin on the whole thing and proclaiming that he’s really just giving a second chance to a group of people who should never have had to spend time in prison anyway, had they not run into that one single moment of misfortune.

As always, the book gains greatly by the presence of Alleyn’s wife, painter Agatha Troy, who has been invited to the party with the aim of having her paint her affluent host’s portrait, but my favorite character is that gentleman’s senior partner (also his de-facto stepfather and honorary “uncle”), who is perfectly able to speak the Queen’s English if he has to, but has never forgotten his roots and has made a point of remaining plain Mr. Smith and Cockney for all other purposes:

“Put it like this,” he tells Alleyn. “I see plenty of fakes in our business, don’t I? Junk tarted up to look like class? And I see plenty of characters who’ve got to the top same way as I did: from the bottom. But with them it’s putting on the class. Talking posh. Plums in their gullets. Deceiving nobody but themselves. ‘Educated privately’ in Who’s Who and coming a gutser when they loose their cool and forget themselves. Not for mine. I’m me. Born Deptford. Ejjercation, where I could pick it up. Out of the gutter, mostly. Me.”

Which, incidentally, is probably as close as Marsh would ever come to commenting directly on Britain’s changing postwar class system, though by way of characters, setting and individual characters’ or plots’ back stories she frequently did so indirectly, and this book of course is no exception. It even concludes with a similarly significant comment on the same topic, this time from none other than Alleyn in response to the final remark made by their host.

*** SPOILER WARNING: The following dialogue contains a direct reference to the murderer: ***

“‘Yes,’ Hilary said in a hurry, ‘but it’s one thing to staff one’s house with — er, ‘oncers’ but quite another to –‘ He stopped short and turned rather pink.
[…]
‘Do you know,’ [Alleyn] asked, ‘what Hilary nearly said?’
‘What?’
‘That when she comes out she’ll qualify for a job at Halberds. Not quite the one envisaged. Parlour-maid perhaps. With perks.’
‘Rory!’
‘I bet you anything you like,’ said Alleyn.”

Which, in turn, is very much a remark that I think the author herself might have made on a similar occasion; tone and all. As her nonfiction writing shows, Marsh was nothing if not forthright in her real life dealings with others, and her wit turned much more to the acerbic than the cozier confines of the Golden Age mystery (to which she deliberately kept — mostly, anyway — in her fiction output) would lead one to suppose.