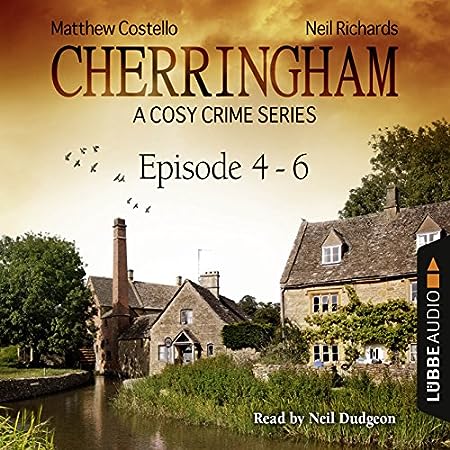 Cherringham is a serial novel à la Charles Dickens, with a new mystery thriller released each month. Set in the sleepy English village of Cherringham, the detective series brings together an unlikely sleuthing duo: English web designer Sarah and American ex-cop Jack. Jack’s a retired ex-cop from New York, seeking the simple life in Cherringham. Sarah’s a Web designer who’s moved back to the village to find herself. But their lives are anything but quiet as the two team up to solve Cherringham’s criminal mysteries.

This compilation contains episodes 4 – 6: THICK AS THIEVES, LAST TRAIN TO LONDON and THE CURSE OF MABB’S FARM.

Here Jack and Sarah get caught up in a mysterious treasure hunt. They tease out the truth behind the town puppeteer’s death, and they’re threatened by the ancient curse of a local farm.

Like in the case of Bunburry, I’m very much taking to this series, too, though in this instance I liked the first three novellas a bit better than this second trio. There’s a feeling of slick routine that is beginning to settle in which is completely absent (so far) from the Bunburry books, however similar their setting and atmosphere may be on the face of it. But so far, I’m still very much enjoying the ride nevertheless (even if Cherringham book 5 in particular, Last Train to London, stretches credibility more than just a little, especially so the ending).