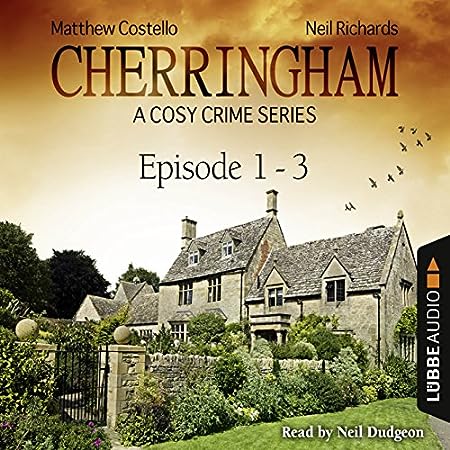 Cherringham is a series à la Charles Dickens, with a new mystery thriller released each month. Set in the sleepy English village of Cherringham, the detective series brings together an unlikely sleuthing duo: English web designer Sarah and American ex-cop Jack.  Jack’s a retired ex-cop from New York, seeking the simple life in Cherringham. Sarah’s a Web designer who’s moved back to the village find herself. But their lives are anything but quiet as the two team up to solve Cherringham’s criminal mysteries.

This compilation contains episodes 1 – 3: MURDER ON THAMES, MYSTERY AT THE MANOR and MURDER BY MOONLIGHT.

Here Jack and Sarah investigate a suicide in the River Thames – or was it murder? They investigate an “accidental” fire with deadly consequences, and they nab the culprit behind the Rotary Club choir poisoning.

Like Helena Marchmont’s Bunburry series, this is exactly what a cozy series is supposed to read like — and they’re even short enough so you can squeeze them in for a quickie whenever nothing else will answer. No wonder these sold like hotcakes when they were first published; Richards and Costello really hit on a winning formula (so, of course, did Marchmont).