Advent also means “second coming”: Read a pastiche, or a book written by an “authorised author” by the deceased author’s estate. OR: There are four Sundays in Advent.  Read the fourth book of a series or a book with the word “four” in the title. 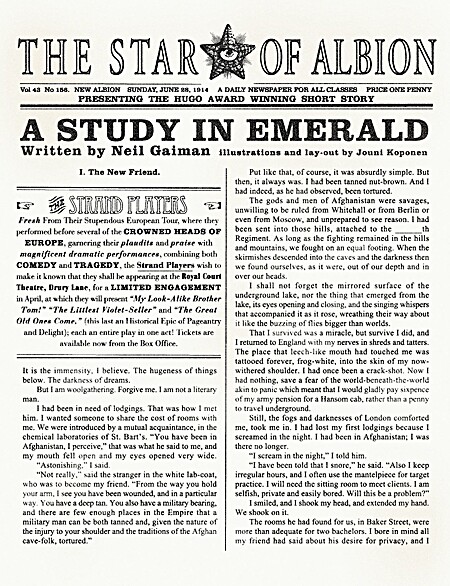 Shout-out to Arbie and Moonlight, who mentioned this elsewhere, with Moonlight sharing the link to the free copy available on Neil Gaiman’s website.  Thank you both!

Also a huge shout-out to the story’s illustrator, Jouni Koponen, who created a Victorian newspaper / tabloid / penny dreadful look, complete with a set of cleverly done, frankly hilarious period style mock advertisements (which are actually the best part of the whole thing).

Gaiman likes to spin literature classics from other genres (notably mysteries) through the Cthulhu myth; I imagine the temptation to give Arthur Conan Doyle’s Sherlock Holmes canon the Lovecraft treatment was irresistible.  That said, in-jokes and allusions to Conan Doyle abound in text, structure, plot and characters alike; all the way to the solution, which is patterned on that of one of Holmes’s most famous cases. — I’ll never like any pastiche anywhere near as much as the original, but as Holmes pastiches go, this one is well done; true enough to the original not to come across as disrespectful or mocking and at the same time with enough of a spin to make it clear that this cannot possibly be anything other than a pastiche.  From what little I know of the Cthulhu myth, I would hope that Lovecraft readers would say the same.

This came just in time for the Advent square in 24 Festive Tasks, so I’ll claim it as my read for that square.