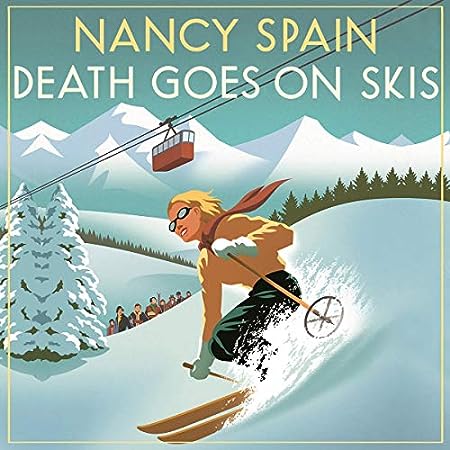 Miriam Birdseye is daring, brilliant – and a long way from The Ivy. Our dashing heroine, a famous revue artist, takes to the slopes with her coterie of admirers. Champagne flows and wherever Miriam goes she leaves a trail of gossip in her wake.

Fellow ski-resort guests include the celebrated Russian ex-ballerina, Natasha Nevkorina, whose beauty is matched only by her languor, Natasha’s burly husband, nightclub owner Johnny DuVivien, and the wealthy Flahertés, a family who have made their money importing scents: handsome playboy Barney, his wife Regan, their two obnoxious children and the governess, Rosalie. Unbeknownst to Regan, Barney’s mistress, a film star, is also there with her husband.

When secrets start to unravel, tensions rise, and soon amateur sleuths Miriam and Natasha have not one but two murders to solve. In the hands of Nancy Spain, for whom farce and humour are a lot more fun than a conventional detective novel, the result is a deliciously wild ride.

I think I’ve reached saturation point, more or less, with regard to British mysteries set in Alpine skiing environments. They all seem to have more or less the same structure: people meet on the train to the Continent / the train from Calais to their Alpine skiing destination, they arrive at said destination — in this instance a fictional one, though clearly modelled on Switzerland –, murder happens, someone from the skiing party plays detective (with or without involvement of the local police), and skiing plays some role or other in the solution of the mystery. That said, I did think the plotting in both Patricia Moyes’s Dead Men Don’t Ski and Carol Carnac (Edith Caroline Rivett / E.C.R. Lorac)’s Crossed Skis is stronger than in this book, and I could seriously have done without its ending — it feels like an unnecessarily violent, completely superflouous appendix and is and in no way in keeping with the book’s otherwise deliberately light, satirical tone.