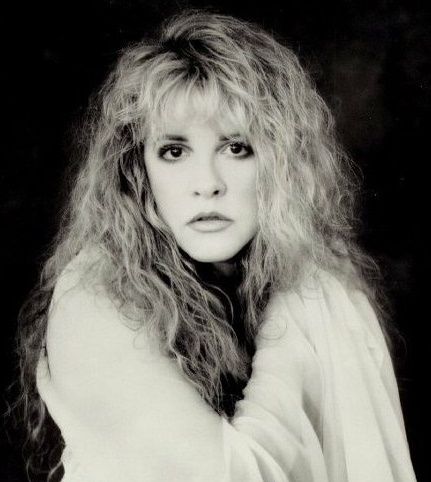 Stephanie Lynn “Stevie” Nicks (born Phoenix, AZ, USA, May 26, 1948) is an American singer-songwriter, who in the course of her work with Fleetwood Mac and her extensive solo career has produced over forty Top 50 hits and sold over 140 million albums. She was deemed “The Reigning Queen of Rock and Roll” and one of the “100 Greatest Singers of All Time” by Rolling Stone magazine and, as a member of Fleetwood Mac, was inducted into the Rock and Roll Hall of Fame in 1998. As a solo artist, she has garnered eight Grammy Award nominations and, with Fleetwood Mac, a further five.

Nicks first met her future musical and romantic partner, Lindsey Buckingham, during her senior year at Menlo Atherton High School. Buckingham contacted Nicks a few years later and asked her to join him and his bandmates Javier Pacheco and Calvin Roper in a band called Fritz. Fritz became popular as a live act from 1968 until 1972, opening for popular musicians Jimi Hendrix and Janis Joplin – both of whom Nicks credits as inspiring her own stage intensity and performances – among others, in the San Francisco Bay Area. Both Nicks and Buckingham attended San Jose State University in Northern California, where Nicks majored in Speech Communication. She had planned on becoming an English teacher, but she and Buckingham dropped out in 1968 to move to Los Angeles in pursuit of a music career when Nicks’ family moved to Chicago. After Fritz disbanded in 1972, Nicks and Buckingham continued to write and record as a duo, producing demo tapes at the coffee plant belonging to Buckingham‘s father Morris. They secured a deal with Polydor Records, and Polydor used tracks from the demo tapes to release the album Buckingham Nicks in 1973. The album was not a commercial success, despite the live shows that Nicks and Buckingham performed together to support it, and Polydor dropped the pair from the label. To support herself and Buckingham, who wrote music while recovering from mononucleosis (a fever-inducing, infectious, viral disease caused by the Epstein-Barr herpes virus or EBV), Nicks worked a variety of jobs, which included waiting tables and a stint cleaning engineer/producer Keith Olsen’s house, where Nicks and Buckingham lived for a while.

Also during this period, Nicks and Buckingham briefly relocated to Aspen, Colorado. While there, Buckingham landed a guitar-playing gig with the Everly Brothers, and toured with them while Nicks stayed behind. It was during this time that Nicks wrote Rhiannon, after seeing the name in the novel Triad by Mary Leader, which she had picked up at an airport book store. She was then as-yet unaware at the time of the Welsh Mabinogi legend of Rhiannon; only later did she learn that the name Rhiannon originated from a Welsh goddess-queen (misrepresented as a witch), and she was amazed that the haunting song lyrics applied to the Welsh Rhiannon as well. Nicks then researched the Mabinogion story and began work on a Rhiannon project, unsure of whether it would become a movie, a musical, a cartoon, or a ballet. There are several Rhiannon Songs from this unfinished project, including Stay Away and Maker of Birds. Nicks later also wrote the Fleetwood Mac song Angel based on the Rhiannon story. – During her stay in Aspen with Buckingham, she moreover wrote Landslide, inspired by the scenery of Aspen and her inner turmoil over her decision to pursue music.

Nicks joined Fleetwood Mac in 1974, along with her partner Lindsey Buckingham, after Buckingham had been introduced to Mick Fleetwood shortly before the departure of then-Fleetwood Mac guitarist Bob Welch. In 1975, the band achieved success with the album Fleetwood Mac. Nicks’ Rhiannon, which appeared on the album, would eventually be voted one of The 500 Greatest Songs of All Time by Rolling Stone magazine. Her live performances of the song throughout the decade began to take on a theatrical intensity not present on the album’s single. The song built to a climax in which Nicks’ vocals were so impassioned that Mick Fleetwood later declared in the VH1 feature Stevie Nicks – Behind the Music, “her Rhiannon in those days was like an exorcism.”

Fleetwood Mac‘s second album after the incorporation of Nicks and Buckingham, Rumours, released in 1977, was the best-selling album of all time the year of its release, and, to date, is the eighth best-selling album of all time, having sold over 40 million copies worldwide. The album remained at No.1 on the American albums chart for 31 weeks, and reached the top spot in various countries worldwide. The album won Album of the Year in 1978 and produced four US Top 10 singles, with Nicks’ Dreams being the band’s first and only US number one hit.

Nicks began her solo career in 1981 with the album Bella Donna, which reached Platinum status less than three months after its release, and has since been certified quadruple-platinum. She has produced seven more solo studio albums to date, with her most recent entitled In Your Dreams, and released on May 3, 2011. Having conquered her cocaine addiction and dependency on tranquilizers, she continues to be a popular solo performer. Nicks is known for her distinctive voice, mystical visual style, and symbolic lyrics, as well as the famous (sometimes tense) chemistry between her and Lindsey Buckingham.

Many singers – among them Courtney Love, Belinda Carlisle, the Dixie Chicks, Mary J. Blige, Sheryl Crow, Taylor Swift, Laura Branigan, Sarah McLachlan and Tori Amos – have cited Nicks as an inspiration. She has participated in duets or provided guest vocals for several of their albums and some have returned the favour, notably Crow and the Dixie Chicks. The Dixie Chicks covered her 1975 classic Landslide, which became a Top 10 hit (#1 on the Adult Contemporary chart) and a No.1 Hit on the Country Chart. The Dixie Chicks’ cover of the song also earned her a BMI Songwriters Award in 2003 when it won “Song of the Year” (the award is given to the songwriter of the track, regardless of the performer). According to BMI, Landslide also earned Nicks the 35th Robert J. Burton Award as “Most Performed Country Song of the Year,” a distinction that is given to the song tallying the most feature US broadcast performances during the eligibility period.

Stevie Nicks is known for her mystical image, her billowing chiffon skirts, shawls, layers of lace and long blonde hair. Margi Kent, a designer from California, has worked with Nicks since the 1970s to perfect her style and the wardrobe that Nicks herself has since come to call her “uniform.” Perhaps the most famous part of that wardrobe are the suede (usually black, cream, tan or maroon) platform boots which she has worn in almost all of her performances since 1975. Standing at 5 feet 1 inch (1.55 m), Nicks has stated she felt a little ridiculous standing next to the much taller Mick Fleetwood; for this reason she developed a penchant for 6-inch (15 cm) platform boots. “Even when platforms went completely out of style, I kept wearing them because I didn’t want to go back to being 5 feet 3 inches (1.60 m) in heels”, she told Allure magazine in 1995. Another trademark of Nicks’s is a Dickens-style gentleman’s formal top hat, which she began wearing in the late 1970s. During the early 1980s she wore Renaissance poets’ velvet berets with plume feathers. In the late 1980s and early 1990s, she wore fashionable hats on stage, and she often still wears a black top hat adorned with giant plumes.

Many of Nicks’s shawls and capes also have an association with her songs in her live performances, many becoming as signature in live performances. These include a red/crimson shawl for Sara, white for Edge of Seventeen, gold for Gold Dust Woman and black with round gold circles for Stand Back. One of her trademarks is twirling across the stage with shawls flying during the interlude of her classic songs, notably Stand Back and Gypsy.

Nicks has said that her vocal style and performance antics evolved from female singers like Grace Slick and Janis Joplin. She admitted inspiration when she saw Joplin perform live (and opened for with her first band Fritz) shortly before Joplin’s death. Nicks owns a strand of Joplin’s stage beads. She also commented that she once saw a woman in her audience dressed in dripping chiffon with a Gibson Girl hairstyle and big boots and Nicks knew she wanted something similar. She took the look and made it her own. Another important part of Nicks’s image is her jewelry. Nicks typically introduces one signature piece of jewelry during each tour. Such items have included silver bracelets, crescent moon pendant, pyramid-shaped pendant, winged-heart pendant, gold crosses and, most recently, a Tiffany pendant with diamonds meaning “longevity”. The crescent moon pendant is arguably the most iconic of all Nicks’s jewelry – the original was bought while she was in England on tour with Fleetwood Mac during the Tusk era. Nicks then had her personal jeweler, Henri David of Philadelphia, make replicas of the moon pendant which she gave to her friends. In recent years, celebrity friends such as Bette Midler and ice-skating star Tai Babilonia have been photographed wearing their “Stevie moons”.

Nicks has even commented in interviews that she never would have dreamed that her trademark Bella Donna / Witchy Woman image would have been taken so seriously by her fans, often joking that she does not live her private life in her stage clothes and “Stevie garb” as many people seem to think. However, she greatly credits her career / stage image for its role in giving her a trademark that has made her unique and timeless.

All your life you’ve never seen a woman
Taken by the wind
Would you stay if she promised you heaven?
Will you ever win?”

And it all comes down to you
Well you know that it does
And lightning strikes, maybe once, maybe twice
Oh, and it lights up the night
And you see your gypsy
You see your gypsy

To the gypsy that remains
Faces freedom with a little fear
I have no fear, I have only love”