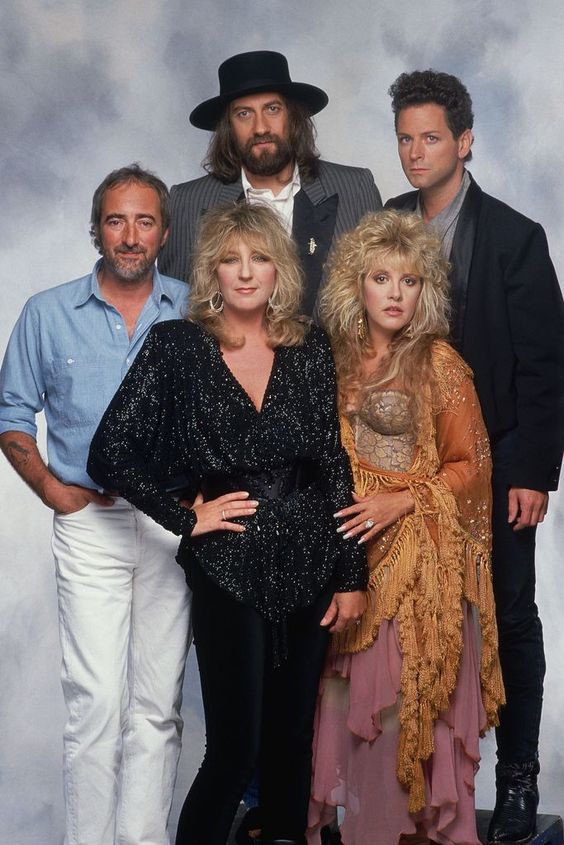 Fleetwood Mac are a British-American rock band formed in 1967 in London. Due to numerous line-up changes, the only original member present in the band is its namesake, drummer Mick Fleetwood. Although band founder Peter Green named the group by combining the surnames of two of his former bandmates (Fleetwood, McVie) from John Mayall’s Bluesbreakers, bassist John McVie played neither on their first single nor at their first concerts, as he initially decided to stay with Mayall. The keyboardist, Christine McVie, who joined the band in 1970 while married to John McVie, appeared on all but the debut album, either as a member or as a session musician. She also supplied the artwork for the album Kiln House.

The two most successful periods for the band were during the late 1960s British blues boom, when they were led by guitarist Peter Green and achieved a UK number one with Albatross; and from 1975 to 1987, as a more pop oriented act, featuring Christine McVie, Lindsey Buckingham and Stevie Nicks. Fleetwood Mac’s second album after the incorporation of Nicks and Buckingham, 1977’s Rumours, produced four U.S. Top 10 singles (including Nicks‘ song Dreams, which was the band’s only U.S. number one) and remained at No.1 on the American albums chart for 31 weeks, as well as reaching the top spot in various countries around the world. To date the album has sold over 40 million copies worldwide, making it the eighth highest selling album of all time.

The band achieved more modest success in the intervening period between 1971 and 1974, with the line-up including Bob Welch, and also during the 1990s in between the departure and return of Nicks and Buckingham. The band’s Rumors lineup eventually reunited for a hugely successful tour and live album, The Dance, in 1997, also marking the 20th anniversary of the album Rumours.  Christine McVie left the band in 1998, but continued to work with them in a session capacity. Meanwhile, the group remained together as a four-piece, releasing their most recent studio album, Say You Will, in 2003. Christine McVie rejoined the band full-time in 2014. In 2018, Buckingham was fired from the band and was replaced by Mike Campbell, formerly of Tom Petty and the Heartbreakers, and Neil Finn of Split Enz and Crowded House.

Fleetwood Mac have sold more than 120 million records worldwide, making them one of the world’s best-selling bands. In 1979, the group were honoured with a star on the Hollywood Walk of Fame. In 1998 the band were inducted into the Rock and Roll Hall of Fame and received the Brit Award for Outstanding Contribution to Music. In 2018, the band received the MusiCares Person of the Year award by The Recording Academy in recognition of their artistic achievement in the music industry and dedication to philanthropy.

With Lindsey Buckingham and Christine McVie