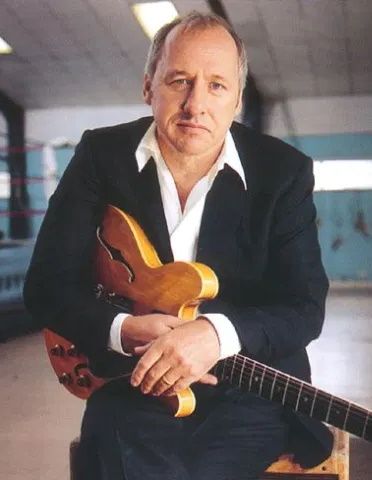 Mark Freuder Knopfler, OBE (born Glasgow, Scotland, August 12, 1949) is a British musician, vocalist, songwriter, record producer and film score composer. He is best known as the lead guitarist, vocalist, and songwriter for the British rock band Dire Straits, which he co-founded with his brother, David Knopfler in 1977. After Dire Straits disbanded in 1995, Knopfler went on to record and produce seven solo albums, and like his songs from the Dire Straits days, many produced hit songs. He has composed and produced film scores for eight films, including Local Hero (1983), Cal (1984), The Princess Bride (1987), and Wag the Dog (1997). In addition to his work with Dire Straits and as a solo artist and composer, Knopfler has recorded and performed with many prominent musicians, including Chet Atkins, The Chieftains, Eric Clapton, Bob Dylan, Emmylou Harris, Jools Holland, Steely Dan, Bryan Ferry, Sonny Landreth, Sting, and Van Morrison, among others, sometimes working as a session musician. He has produced albums for Tina Turner, Bob Dylan, and Randy Newman.

Mark Knopfler is left-handed, but plays right-handed, and is recognised as a fingerstyle guitarist, using a personal variant of the clawhammer style. Fingerpicking is usually associated with the Steel-string acoustic guitar, but Knopfler often (though not always) plays an electric guitar. He revealed during a French interview that he uses a pick for his rhythm guitar work during recording sessions, surprising the interviewer by pulling a pick out of his pocket and saying that he usually carries one. He has long favoured Fender Telecaster and Stratocaster style guitars. Fender carries a Mark Knopfler Artist Series Stratocaster. During the 1980s he came to appreciate the tone of the Gibson Les Paul and his original 1958 has been used regularly in the studio and on stage. British author and humorist Douglas Adams said about Knopfler in his book So Long, and Thanks for All the Fish: “Mark Knopfler has an extraordinary ability to make a Schecter Custom Stratocaster hoot and sing like angels on a Saturday night, exhausted from being good all week and needing a stiff drink.”

Described by Classic Rock as a virtuoso, Knopfler was ranked 27th on Rolling Stone magazine’s list of 100 Greatest Guitarists of All Time. Knopfler and Dire Straits have sold in excess of 120 million albums to date. A four-time Grammy Award winner, Knopfler is the recipient of the Edison Award, the Steiger Award and the Ivor Novello Award, and holds three honorary doctorate degrees in music from universities in the United Kingdom. Knopfler was inducted into the Rock and Roll Hall of Fame as a member of Dire Straits in 2018.

“We prayed these wars would end all wars –
In war we know is no romance.”

There’s a chink of light, there’s a burning wick
There’s a lantern in the tower
Wee Willie Winkie with a candlestick
Still writing songs in the wee wee hours
On Charlotte Street I take
A walking stick from my hotel
The ghost of Dirty Dick
Is still in search of Little Nell
And it’s what it is
It’s what it is now
Oh what it is
What it is now”

(Album: Kill to Get Crimson)

Then you’ll find me in Madame Geneva’s
keeping the demons at bay
There’s nothing like gin for drowning them in
but they’ll always be back on a hanging day,
On a hanging day