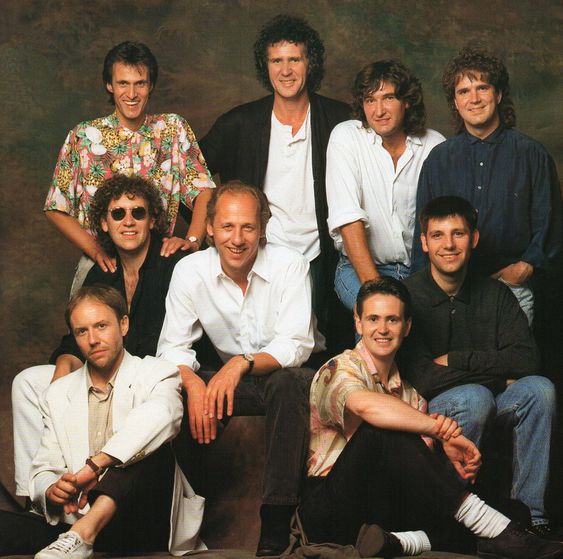 Dire Straits were a British rock band, formed in 1977 by Mark Knopfler (lead vocals and lead guitar), his younger brother David Knopfler (rhythm guitar and backing vocals), John Illsley (bass guitar and backing vocals), and Pick Withers (drums and percussion). Dire Straits’ sound drew from a variety of musical influences, including jazz, folk, blues, and came closest to beat music within the context of rock and roll. Despite the prominence of punk rock during the band’s early years, the band’s stripped-down sound contrasted with punk, demonstrating a more “rootsy” influence that emerged out of pub rock. Many of Dire Straits’ compositions were melancholic. Dire Straits’ biggest selling album, Brothers in Arms, has sold over 30 million copies.

They also became one of the world’s most commercially successful bands, with worldwide album sales of over 120 million. Dire Straits won numerous music awards during their career, including four Grammy Awards, three Brit Awards – winning Best British Group twice, and two MTV Video Music Awards. The band’s most popular songs include Sultans of Swing, Lady Writer, Romeo and Juliet, Tunnel of Love, Telegraph Road, Private Investigations, Money for Nothing, Walk of Life, So Far Away, Your Latest Trick and Brothers in Arms.

Dire Straits’ career spanned a combined total of 15 years. The band originally split up in 1988, but reformed in 1991. Dire Straits disbanded for good in 1995 when Mark Knopfler launched his career full time as a solo artist. There were several changes in personnel over both periods, leaving Mark Knopfler and John Illsley as the only two original bandmates who had remained throughout the band’s career.

“A lovestruck Romeo sings a streetsuss serenade
Laying everybody low with a lovesong that he made
Finds a streetlight, steps out of the shade
Says something like, ‘You and me babe, how about it?’

Juliet says, ‘Hey it’s Romeo, you nearly gimme me a heart attack.
He’s underneath the window,’ she’s singing, ‘hey la my boyfriend’s back.
You shouldn’t come around here singing up at people like that
Anyway what you gonna do about it?’

‘Juliet the dice were loaded from the start
And I bet and you exploded in my heart
And I forget, I forget the movie song
When’re you gonna realise it was just that the time was wrong – Juliet?

Come up on different streets, they both were streets of shame
Both dirty, both mean, yes and the dream was just the same.
And I dreamed your dream for you and now your dream is real
How can you look at me as if I was just another one of your deals?

Juliet, when we made love you used to cry
You said I love you like the stars above, I’ll love you till I die
And there’s a place for us, you know the movie song
When’re you gonna realise it was just that the time was wrong – Juliet?

And all I do is miss you and the way we used to be
All I do is keep the beat, the bad company
And all I do is kiss you through the bars of a rhyme
Juliet, I’d do the stars with you any time

Juliet, when we made love you used to cry
You said, I love you like the stars above and I’ll love you till I die
There’s a place for us, you know the movie song
When’re you gonna realise it was just that the time was wrong – Juliet?’

A lovestruck Romeo sings a streetsuss serenade
Laying everybody low with a lovesong that he made
Finds a convenient streetlight, steps out of the shade
Says something like, ‘You and me babe how about it?

You and me babe, how about it?”

“A long time ago came a man on a track
Walking thirty miles with a pack on his back
And he put down his load where he thought it was the best
Made a home in the wilderness
He built a cabin and a winter store
And he ploughed up the ground by the cold lake shore
And the other travellers came riding down the track
And they never went further, no, they never went back
Then came the churches, then came the schools
Then came the lawyers, then came the rules
Then came the trains and the trucks with their loads
And the dirty old track was the telegraph road
Then came the mines – then came the ore
Then there was the hard times, then there was a war
Telegraph sang a song about the world outside
Telegraph road got so deep and so wide
Like a rolling river …
And my radio says tonight it’s gonna freeze
People driving home from the factories
There’s six lanes of traffic
Three lanes moving slow …
I used to like to go to work but they shut it down
I got a right to go to work but there’s no work here to be found
Yes and they say we’re gonna have to pay what’s owed
We’re gonna have to reap from some seed that’s been sowed
And the birds up on the wires and the telegraph poles
They can always fly away from this rain and this cold
You can hear them singing out their telegraph code
All the way down the telegraph road
You know I’d sooner forget but I remember those nights
When life was just a bet on a race between the lights
You had your head on my shoulder, you had your hand in my hair
Now you act a little colder like you don’t seem to care
But believe in me baby and I’ll take you away
From out of this darkness and into the day
From these rivers of headlights, these rivers of rain
From the anger that lives on the streets with these names
‘Cos I’ve run every red light on memory lane
I’ve seen desperation explode into flames
And I don’t want to see it again …
From all of these signs saying sorry but we’re closed
All the way down the telegraph road”