I started the new year with a minor Allingham binge and, having now read a fair number of her Campion mysteries (12, i.e. 2/3 of the 18 novels that she herself completed), I think I can safely say that while I won’t ever like this series as much as I do those of Christie, Sayers, and Marsh, when Allingham is good, she is really good and can easily measure up to the other Golden Age “Queens of Crime.”

Campion starts out as a fairly thinly-drawn cipher in The Crime at Black Dudley, but that is due to the fact that Allingham wasn’t initially intending to make him her main detective: he was her publisher’s preference over the character that Allingham herself had had in mind as the lead.  So, in the following novels, she willy-nilly had to put some more flesh onto his hitherto meager bones, and pronto.  Unfortunately, she didn’t do likewise for the plots (nor for her books’ other characters), which in books 2 and 3 (Mystery Mile and Look to the Lady) remain variations on the same theme — a treasure hunt with murder interlude, complete with an international crime syndicate led by a master criminal, various abduction schemes, and supporting characters so unrealistic and twodimensionally cardboard they’d go up in flames if you only held a lighter vaguely in their direction.

That said, in book 2 (Mystery Mile) already Allingham did come up with one of the greatest sidekicks ever in the history of mystery writing — Campion’s “gentleman’s gentleman” Maggersfontein Lugg, who (being an ex-burglar) is anything but gentlemanlike — and even by the time she wrote this book, she had already made great strides towards finding her style, and she’d definitely also learned a thing or two about tightening up a meandering plot.

The first one of her books that I really enjoyed (or had, on an earlier occasion, even though I didn’t revisit it for this particular exercise) is book 4, Police at the Funeral: There still is a bit too much of a “woman in distress” element for my liking at the very beginning of this book, but essentially it’s a classic country house mystery with a clever plot and a cast of unusual characters that are definitely showing signs of being more rounded than their confrères of the earlier novels — the whole thing could easily give Agatha Christie a run for her money (even though the solution won’t surprise anyone who knows their Conan Doyle and Christie tolerably well).

With book 5, Sweet Danger, we’re back, alas, to the “treasure hunt with murder interlude and crime syndicate led by a master criminal” plot phenomenon, this time even with one of the Golden Age’s most overused tropes thrown in (a tiny fictitious principality in the Balkans as the origin of the unsavory doings on British soil), all of which by this point had me thorougly gritting my teeth.  What elevates this book (somewhat) above its earlier predecessors, however, are its characters; first and foremost, then-17-year-old Lady Amanda Fitton, who even at that age is completely Campion’s equal and manages to bowl him over completely in no time at all.  (She’d return in several subsequent novels and eventually end up as his wife; not without first having taken up a careers as a mechanic engineer.)

Book 6, Death of a Ghost, is based on an ingenious idea, set in the arts world, featuring a range of fairly over the top (although not necessarily always likeable) characters and, though Campion tumbles to “whodunnit” fairly early on, the “howdunit” and “whydunit” are far less clear.  One of my favorite installments from the bunch that I’ve read so far (albeit speaking from memory — I haven’t revisited this one recently, either … I probably should).

Book 7, Flowers for the Judge, begins like a classic Golden Age locked room mystery set in the world of publishing: halfway into the story it becomes clear we’re on a sort of treasure hunt yet again (or rather, on the hunt for a manuscript that may or may not exist and provide a vital clue to the murder), but it’s clear here that the manuscript is merely a tool and Allingham’s chief interest is in the characters — one in particular –, so I’m willing to forgive Allingham for (semi-)falling back on her favorite ploy here.  (Also, I really like the ending, which provides a twist that rather made me smile, and which for a Golden Age mystery is anything but P.C.)

Book 8, The Case of the Late Pig, is an oddity in that it’s told from Campion’s point of view — what with its distinctly outlandish plotline and the exchanges between Campion and Lugg it reads like Allingham’s take on Jeeves and Wooster (though it’s less clear who is supposed to be who), with another locked room puzzle thrown in for good measure and, like in Death of a Ghost, some monkey business associated with a (not-so) dear departed.  I rather liked its twists when I first read it; I’ve only ever revisited it on screen since, though, where the different narrative point of view isn’t as apparent as in print.  Probably I should reread it at some point to see whether the first person narrative voice bothers me more now that I’ve read more books of the series overall.

Book 9, Dancers in Mourning, is Allingham’s visit to classic Ngaio Marsh territory — the world of the London stage –, combined once more with a country house setting.  At this point Allingham is very assured in creating interesting characters and a plot that holds together (also, this book is firmly within established Golden Age traditions), all of which makes for a rather enjoyable read. — Side note: This is also the last book in which Campion is shown as unlucky in love with one of the story’s female characters; in this particular instance, a married woman, which makes for quite a bit more depth than his previous forays into the territory of romance, mostly with the sisters and daughters of his friends and / or clients.

Book 10, The Fashion in Shrouds, sees Campion reunited — of sorts — with Amanda Fitton, who is now working as an engineer: what starts as a (purported) ploy of Amanda’s designed to disentagnle her employer from the married star actress he has fallen in love with ends up with Campion and Amanda taking the first steps towards a bona fide union.  Topically, this is Allingham’s take on career women; besides Amanda and the aforementioned vampish actress, the third woman on whom the story focuses is is Campion’s sister Valerie, co-owner and chief designer of a fashion house.  In approach and execution, this novel is nowhere near as accomplished as Dorothy L. Sayers’s Harriet Vane novels (particularly Gaudy Night, which was published three years before The Fashion in Shrouds) — and the only truly independent and self-assured female character is Amanda, as well as Campion and Valerie’s “Tante Marthe”, the co-owner of the fashion house — but I suppose given its publication date, it’s worth mentioning that Allingham is placing career women center stage in a (mostly) favorable light at all.

Book 11, Traitor’s Purse, to me is a hot mess; a fallback of the worst kind into Allingham’s early “treasure hunt with assorted villainy” plotlines, replete with incomprehensible decisions on Campion’s part that not even a head injury can satisfactorily explain away (in fact, in light of that head injury they’re even more inexplicable), cipher characters, and a thoroughly implausible plot.  Seems Allingham, like Christie, got caught up in the “5th column” / “enemy at home” noise echoing through Britain (like through most, if not all European countries) in WWII, when this book was published; and again like Christie, she just simply didn’t know enough about the world of espionage to pull it off convincingly.

Books 12 and 13 (Coroner’s Pidgin and More Work for the Undertaker) are, as yet, on my TBR — I don’t know when I’ll get around to them, but after this recent little binge, I doubt it will be anytime soon.

Which finally brings us to Book 14, The Tiger in the Smoke; in terms of characterization and atmosphere undoubtedly one of Allingham’s strongest — at least of the first 14 Campion novels.  Yet again we find about halfway through the book that we are on a treasure hunt, but for once even the villains — and we know who they are almost from the get-go — are fully rounded characters with an inner life and both a past and a present (albeit not much of a future if it’s down to Campion and the police).  Campion’s Scotland Yard sidekick of the earlier books, Stanislaus Oates, has climbed the career ladder all the way to the top, so the day to day police work is now being done by a very sympathetically drawn and, again, fully rounded new character, D.C.I. Charles Luke (side note: like Amanda’s path from teenager to career woman to (now) Campion’s wife and equal opportunity “lieutenant”, another instance showing that unlike Christie, Allingham allowed her characters to age in real time).  And towards the end of the book, just before the final resolution, we even get a finely-drawn downright Dostoevskyan exchange between a priest and the worst of the bad guys that a younger Allingham might have given her eye teeth to write, but would not have been able to pull off anywhere near as accomplished. What’s not to like?! 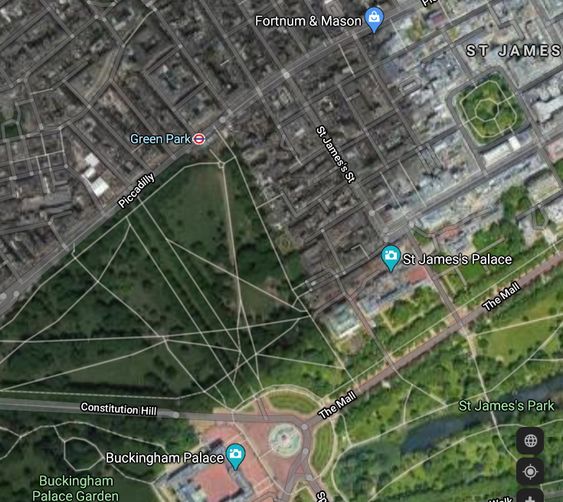 3 thoughts on “Mr. Campion of 17A Bottle Street, Piccadilly, London”