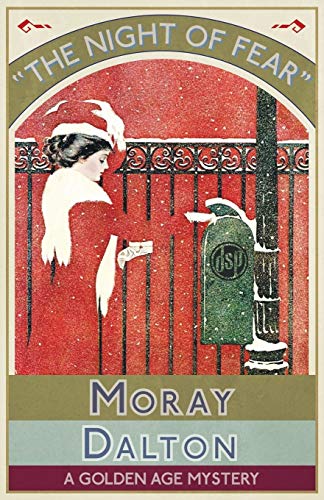 After a late start into this buddy read (and a first evening where I was too wiped out to reread more than the two introductions and the first 15 pages), I ended up essentially whipping through the whole book in two installments of roughly two hours each. I found that I still remembered virtually everything from last year’s read, except for the fact that the murder occurs during a fancy dress party — the narrative purpose of which I still don’t see, except perhaps for the lurid visuals of the murdered man’s blood on the white pierrot costume worn by the poor gentleman who ends up discovering him and swiftly finds himself accused of having done the deed.

That detail aside, the book still holds together for me as well as during my first read. The plotting is solid and relatively straightforward, the likeable characters are likeable without being either too saccharine or too idiosyncratic (Glide’s tics could be decidedly worse than constantly playing with a ball of wax), and Dalton gives me enough ideas about the setting to let my mind work out the rest without being bludgeoned to death by verbosity. There’s perhaps a bit of a surfeit of investigators, but that surfeit comes with a clear narrative purpose, so it’s all to the good; even if I mourn the fate of one of them. Also, while I prefer meeting the cast of a mystery’s characters before the evil deed occurs, I know that many Golden Age mystery authors handled things differently in an attempt to “play fair” with the reader and place us on the same footing as the investigator(s), which means that like them, we’re coming onto the scene when the murder has already occurred. Though, stricty speaking, Dalton doesn’t entirely play fair — there’s a crucial bit of information that is only revealed very late in the game — but once you have that information, it should be relatively easy to work out the rest for yourself (or most of it, anyway).

I really also like the cover of the new Dean Street Press edition — it may be surprising in light of the book’s initial, rather bleak country house setting (or vice versa), but it’s gorgeously designed and fits very well with the background of several of the characters, particularly several of the women. (And let’s face it, it’s no accident, either, that one of the women, perhaps even the one who is intended to be portrayed on the cover, is one of the book’s POV characters.)

Finally, like many authors of her time, Dalton makes use of an equally fancy and dodgy medical theory with regard to one of the book’s characters: while so-called flash blindness, which this character is suffering from since WWI, is classified as either temporary or permanent (i.e., can be reversible), it is a genuinely physical condition and thus not amenable to a sudden cure by shock. Yet, although I’d poo-poo any modern writer to high heaven for this sort of thing for not doing their homework, standards of fiction writing were different in the Golden Age of mysteries, and reliance on fashionable though scientifically unsupported/-able theories and phenomena is so prevalent in the literature of the day that I’ve come to basically shrug it off as par for the course. I’m fairly certain, though, that the founders of the Detection Club, when adopting “[Ronald] Knox’s Commandments” as their guidelines, didn’t interpret “All supernatural or preternatural agencies are ruled out as a matter of course” and “No hitherto undiscovered poisons may be used, nor any appliance which will need a long scientific explanation at the end” narrowly and literally, but, rather, as a rule against any and all scientifically unsupported mumbo-jumbo … and that in and of itself, as well as the adherence to the remainder of Knox’s list (however tongue-in-cheek in its original intention) probably contributed to quite an extent to the more lasting appeal of their books.

Notwithstanding this detail, however, I am really glad that, in addition to the British Library and HarperCollins (who still hold many of the original Collins Crime Club copyrights), Dean Street Press have gotten in on the game of republishing some of the long-forgotten Golden Age mystery series and authors: I love the care that goes into the books’ design and also the fact that, just because the copyrights for most of the better-known / -remembered books are still held by HC, turning to a Dean Street Press republication will almost certainly introduce me to an author who is genuinely new to me in every respect. I’d been planning, since last December already, to read more books by all of the authors recently republished by DSP who were part of my 2020 Christmas reading — so far, I’ve only managed to make good on that idea with regard to Molly Thynne, but rereading The Night of Fear has definitely confirmed that resolution with regard to Moray Dalton as well.

One thought on “Moray Dalton: The Night of Fear – Buddy (Re)Read”