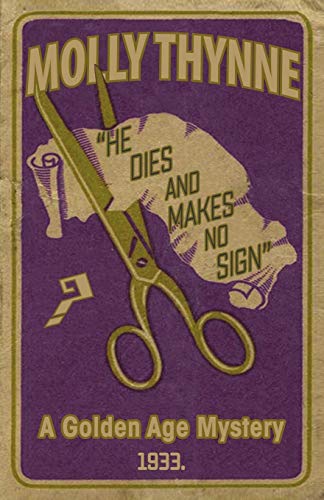 One of the standout books of last year’s holiday reading was Molly Thynne’s The Crime at the ‘Noah’s Ark’, the first of her three Dr. Constantine books, and I instantly resolved to read more books by her.  It turns out, though, that POV may be important to my enjoyment of a book (who knew?!), and sometimes I seem to enjoy a series’s leading character better if presented with him through the eyes of another character than by an author ostensibly writing in the third person, but very substantially from the POV of the lead character himself (as well as the POV of his policeman friend, who however is as deadly series as Dr. Constantine is, too, here).  Or maybe it just shows that by the time she got around to this book, Thynne had already tired of writing mysteries: economically she didn’t need to do it, after all, what with being a member of Britain’s high aristocracy: her real name was Mary Harriet Thynne; the number of marquesses, dukes and earls in her paternal line alone will make your head spin, several of her relatives, including her father, held high positions in His Majesty’s government and diplomatic service, and one of her cousins (a society lady also named Mary Thynne) was a bridesmaid at the wedding of the future King George VI and his wife Elizabeth, née Bowes-Lyon, the parents of the present Queen Elizabeth II.  (By way of an embarrassment of riches, through her mother she was also related to several well-known artists, including James McNeill Whistler, and she had met Henry James, Rudyard Kipling, and other authors of the time even as a child).

Be all that as it may, one of the key features that had charmed me in The Crime at the ‘Noak’s Ark’ was the exuberant spontaneity of its narrative voice and its quirky characters; yet, while traces of that same voice still remain in place here, few if any of the characters can be described as “quirky”, and spontaneity has largely given way to a more mature and self-assured style — which may all be to the good in terms of her development as a writer, and which ordinarily would be something I would welcome, but which somehow here seems like a bit of a mixed blessing: even if you replace a glass of champagne by a very fine and mature wine, you may still find yourself missing the sparkle of the champagne.

Like any good writer, Thynne sets the tone for the novel in its very first paragraph, and that paragraph has chess enthusiast Dr. Constantine returning from the Continent after having unexpectedly lost at a tournament there, being met by rain, rain, and nothing but rain upon his arrival in England, all the way from Dover to Victoria Station, after having survived a rough Channel crossing to boot, and consequently finding himself in “one of his rare moods of depression.”  A call for help from a blue-blooded friend seems to provide some distraction: her only son, one of the country’s most eligible bachelors, must — if Mama is to have any say in the matter — be untangled from an undesirable “involvement”, about which the young man proposes to do the honorable thing even though not in the least compelled to do so by Circumstances.  (Expressed more prosaically, he has fallen head over heels for a young woman whose only crime is to be his social inferior by a considerable margin, with the interesting sideline that his own father is very much in favor of the marriage, whereas the young lady’s only living relative, her grandfather, in his turn seems to be opposed to it in a reverse application of the class issues that the young man’s Mama seems to find so shocking).  Ordinarily, of course, as we know from The Crime at the ‘Noak’s Ark’, Dr. Constantine would find this just the sort of amusing distraction the doctor has ordered, and would contrive to bring about a happy ending (for the couple — with Mama eventually manipulated into favoring the match) in a brace of shakes, but in this instance, an evildoer intervenes and all plans for the future have to be put on hold when the young lady’s grandfather first disappears and, shortly afterwards, is found murdered.

While the change in narrative tone (and characters) is this book’s greatest difference vis-à-vis The Crime at the ‘Noak’s Ark’ (admittedly my only point of reference to date when it comes to Molly Thynne’s writing), I also found the mystery as such decidedly less intriguing, as essentially every major element of the solution is telegraphed early on and the red herrings are easy to spot; and where the earlier book featured plenty of skillfully sketched characters straddling the line (but never tipping over) into caricature and a number of highly entertaining nightly chases and searches (likewise always just about bordering on slapstick without ever fully crossing the line), the present novel ends in a chase for the perpetrator more reminiscent of a gangster movie (which probably was in fact Thynne’s intention), with only a single brief interesting moment, courtesy of a feat of brazen daring on the part of the murderer, and ultimately ending in tragedy.

Don’t get me wrong, this is still an entertaining mystery; and quite possibly, if this had been the first book by Thynne, I might have enjoyed it better.  Unfortunately, however, I read a better book first … I think for my next experience with her writing I’m not going to tackle the remaining (middle) Dr. Constantine novel, but go even further back to her beginnings as a writer, in the hope of recovering some of that exuberance that made The Crime at the ‘Noak’s Ark’ stand out so gloriously to me when I read it last December.