Members of the Detection Club: The Floating Admiral 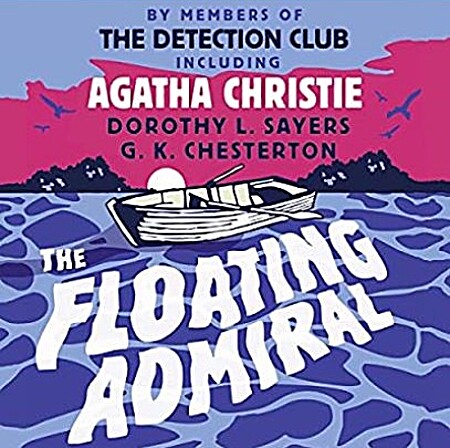 Upon revisiting, much more fun than the first time around.

Well, this was a reread for me and I said I was going to “tag along” with MR’s, BT’s and Lillelara’s buddy read — turns out I ended up whizzing through it because I liked it so much better this time around than when I first read it.

In part, this is doubtlessly due to David Timson’s audio narration, which goes to enormous lengths in harmonizing the various contributors’ authorial styles and making this much more of a consistent book than it comes across in print (or did to me, anyway when I first read it).  But in part it is also because I’m more familiar with some of the book’s contributors in the interim (above and beyond those who still are “big name” mystery novelists today, that is, like Agatha Christie and Dorothy L. Sayers), and they had me chuckling with glee as I recognized their various pet foibles.

Agatha Christie, for example, crafted a chapter in which great reliance is being placed on gossip: as both Miss Marple and Hercule Poirot are known to do again and again. Freeman Wills Crofts has the inspector going through all the nitty gritty motions of investigation and duly doing the legwork to follow down each and every clue. Dorothy L.Sayers injects an entire novel’s worth of fresh clues into the plot at about halfway point, all of them diligently and scholarly researched (as we learn in the annex) — which then has Ronald Knox take stock in the next chapter and compose a veritable catechism of questions to be answered in the investigation.  (In his comments in the annex, Knox vents his frustration about having to take up the baton from Sayers.)  Even before Sayers, Milward Kennedy is the first — but by far not the only contributor — to throw a complete spanner into the works of whatever plotline the authors of the earliest chapters may have been contemplating … and her predecessors’ repeated instances of apparent one-upmanship have Clarence Dane, who wrote one of the final chapters, begin the comments on her own solution by basically saying “I have no idea what is going on here, so I just tried to write a chapter that everybody coming after me could use in whichever way they wanted”.  (Yet, Sayers in her introduction assures us that great fun was had by all.)  And finally we get to Anthony Berkeley, who wraps the whole thing up in his own trademark manner with false endings and pretend-resolutions galore before revealing the real culprit at last (and even after that, he still has a final ace up his sleeve).

Indeed, in this second read, my particular kudos go to Mr. Berkeley, who in the final chapter, prophetically entitled “Cleaning up the Mess“, not only managed to craft a solution that is consistent with all major clues provided by his collaborators in the prior chapters — no matter how divergent their approaches and the theories / solutions / stories underlying their own respective contributions (all of which are included in the book’s annex) — but, even more astonishingly, he even presents a solution which, in keeping with the best of the Golden Age mystery tradition, may actually be guessed, at least in part, over the course of the book.  I didn’t remember the solution when I started revisiting this story, but parts of it came back to me while I was listening, and I kept thinking, “yeah, Berkeley really did use the major clues set out from the beginning and you can see them if you only pay attention”. — I don’t know whether, unlike all of the other contributors, Berkeley had access to the texts setting out his fellow authors’ respective solutions / theories of the crime, but if he didn’t, he is to be applauded all the more, as almost all of those individual solutions contain one or even more elements and aspects that also found their way into Berkeley’s wrap-up of the plot.

Great fun, all in all, the prototype of a successful round robin — and a book that, with this revisit, has definitely found its way into my list of go-to comfort reads.