Members of the Detection Club: Ask a Policeman 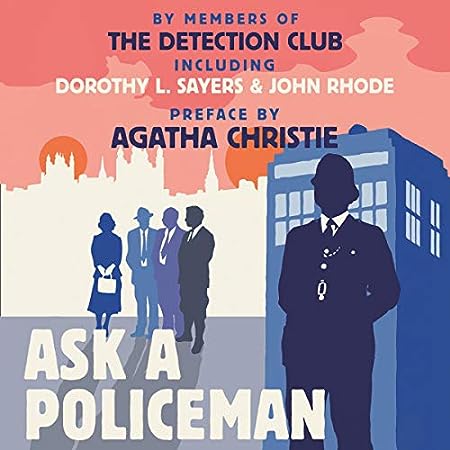 “The murder — if it was murder — of a man like Lord Comstock was an event of world-wide importance.  The newspapers controlled by the millionaire journalist exerted an influence out of all proportion to their real value. Inspired by Comstock himself, they claimed at frequent intervals to be the real arbiters of the nation’s destiny at home and abroad.  Governments might come and go, each with its own considered policy.  The Comstock Press patronized, ignored, or attacked them, as suited Lord Comstock’s whim at the moment.  His policy was fixed and invariable.

This may seem an astounding statement to those who remember how swiftly and how frequently the Daily Bugle changed its editorial opinions.  But Lord Comstock’s policy was not concerned with the welfare of the State, or of anyone else but himself, for that matter.  It was devoted with unswerving purpose to one single aim, the increase in value of his advertisement pages.  The surest way to do this was to increase circulation, to bamboozle the public into buying the organs of the Comstock Press.  And nobody knew better than Lord Comstock that the surest way of luring the public was by a stunt, the more extravagant the better.

Stunts therefore followed one another with bewildering rapidity.  Of those running at the moment, two had attracted special attention.  To be successful, stunts must attack something or somebody, preferably so well established that it or he has become part of the ordinary person’s accepted scheme of things. […]

One antagonist at a time, even so formidable an antagonist as Christianity, could not satisfy the restless spirit of Lord Comstock.  He sought another and found it in the Metropolitan Police, his choice being influenced mainly by the implicit faith which that institution most justly inspired.  Scotland Yard was the principal object of the invective of the Comstock Press.  It was inefficient, ill-conducted, and corrupt.  It must be reformed, root and branch.  The crime experts of the Comstock Press, men who knew how to use their brains, were worth the whole of the C.I.D. and its elaborate machinery, which imposed so heavy and useless a burden upon the tax-payer.

Now and then it happened that a crime was committed, and no arrest followed.  This was the opportunity of the Comstock Press.  Without the slightest regard for the merits of the case, and safe in the knowledge that a Government Department cannot reply, the Daily Bugle, and its evening contemporary, the Evening Clarion, unloosed a flood of vituperation upon the C.I.D., from the Assistant Commissioner himself to his humblest subordinate. […]

In fact, the shadow of Lord Comstock lay heavily on both men, as they sat in the oppressive warmth of the June afternoon.  It was as though his invisible presence lurked in the corner of the room, masterful, contemptuous, poisoning the air with the taint of falsehood.”

Plus ça change … Replace “Comstock” by “Murdoch” and “Scotland Yard” by “the NHS” or “the criminal justice system”, and you could still write the same words, every last one of them, today.

ETA: The book unfortunately didn’t maintain the promise of its early pages, at least not for me; it got bogged down too much in the minutiae of the competing investigations, none of which were entirely convincing — nor was the overall solution, nor the individual contributors’ attempts at appropriating / mocking (?) / slipping into the skins of each others’ detective protagonists.  (If it’s true that Dorothy L. Sayers was less than happy with Anthony Berkeley’s take on Lord Peter Wimsey, I can absolutely see how she come to think that way.)

The above quote, however, still stands out in all its prescient glory.