Martin Goldsmith: The Inextinguishable Symphony – A True Story of Music and Love in Nazi Germany 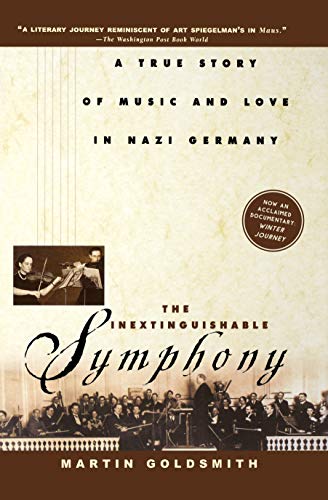 A Son’s Voyage of Discovery of His Parents’ Nightmarish Past

What do we really know about our parents’ life before we were born? That depends largely, I guess, on how much of an interest we show – and on how much they are willing to reveal. Because in the life of every person there are instances and times they rather wish to forget, and not revive time and again by discussion, even if only among their nearest and dearest.

Such, in the lives of author Martin Goldsmith’s parents, were the years from 1933 through 1941; so much so, in fact, that Goldsmith likens that time to the massive ash tree in the house of Germanic warlord Hunding, the setting of the first scene of Richard Wagner’s opera “Die Walküre:” Something looming large, yet never openly acknowledged. Because before George Gunther Goldsmith, furniture and home decorating salesman of Cleveland, Ohio, and his wife Rosemary, a violinist with the St. Louis Symphony and the Cleveland Orchestra, became American citizens in 1947, they had lived a whole other life – the hunted life of Jews in Adolf Hitler’s Germany. And only years after his mother’s death, on a trip to his father’s home town of Oldenburg, did Goldsmith catch the first glimpses of what was hidden behind that massive ash tree, and George Goldsmith began to talk about the events which his, the Goldschmidt family had witnessed there; as well as the early life of Rosemarie née Gumpert in Düsseldorf, the couple’s first meeting in Frankfurt, and their later life in Berlin until their lucky escape to the United States. Beginning with this visit, Martin Goldsmith retraced his family’s path to the early years of the 20th century, when his paternal grandfather Alex Goldschmidt took residence in Oldenburg, and his maternal grandfather Julian Gumpert settled in Düsseldorf.

How intensely personal this voyage into the past must have been becomes clear in the account of Goldsmith’s visit to Oldenburg prison, as a participant in a march retracing the path taken by the Jews – among them the author’s grandfather – driven through the streets of Oldenburg in 1938 by Nazi thugs, to later be shipped off (at least temporarily) to Sachsenhausen concentration camp. But although he writes about his very own family, and now in full knowledge of their fate, Goldsmith’s narrative is in no way sentimental. With a journalist’s detachment he talks about Günther and Rosemarie, Alex, Julian and their wives and other children; turning a nonfiction account whose outcome is clear from the very start into a heartstopping tale few would be able to believe if presented with it under colors other than that of the plain historic truth.

Prominently featured in Goldsmith’s account is the Jewish Culture Association, or Jüdischer Kulturbund; as of 1933 the German Jews’ only permitted artistic organization, in whose orchestra Günther and Rosemarie had met and which had formed the center of their life until they finally left the country. One of the most controversial institutions of Nazi Germany, it reunited what was left of the country’s Jewish musicians, artists, writers and composers – providing a modicum of shelter in an increasingly hostile environment, but also a convenient tool in the Nazi propaganda machine. Were the members of the Kulturbund instrumentalized to deceive public opinion, at home and abroad, about the true intentions of Hitler’s government? By giving their Jewish audience a sense of comfort and “belonging,” did they also prevent some of them from rescuing themselves when there still would have been time? The surviving members of the “Kubu” and their families, interviewed by Goldsmith, come down on both sides of the issue; and the fate of the survivors is probably as symptomatic as that of the many who ultimately did perish in Nazi concentration camps – chiefly among those the Kulturbund’s charismatic founder Dr. Singer, who not only let himself deceive into returning to Germany after already having reached the safe shores of the U.S. but saw a mark of distinction even in his deportation to the “model” concentration camp of Theresienstadt.

Yet, for Günther and Rosemarie the years with the Kulturbund were dominated, above all, by the musical companionship they experienced. What does seem to have haunted them most for the rest of their lives, however, was their very escape to America, while their remaining family members were stuck in Europe and, one way or another, died in Hitler’s concentration camps – and the feeling that with a little effort they just might have saved at least some of them. The letters of Alex Goldschmidt and his younger son Helmut, written to Günther from captivity in France after their own unsuccessful attempt to flee to Cuba, are among the most chilling testimonials contained in this book; and the decision to translate and include them conceivably cannot have been an easy one for Goldsmith. Indeed, it apparently was the knowledge of his family’s fate that, all talent and love of music aside, eventually compelled George Goldsmith to forever retire the flute which, in his life as Günther Goldschmidt, had been the only item of true importance besides his beloved wife Rosemarie; thus punishing himself in a way no outsider could have done. Yet, the couple’s gift for music lives on in their son, who in his own way has brought many hours of joy to radio listeners all over the U.S.

Martin Goldsmith’s “Inextinguishable Symphony” – named for Danish composer Carl Nielsen’s Fourth Symphony, which sets music, as a parable for life itself, against war, terror and destruction – is as much a personal journey of discovery as a journalist’s account of historic facts; seeking to understand rather than to judge. It deals with a time in which morality was thoroughly upset by a profoundly immoral regime, which cannot possibly have remained without effect on anybody who witnessed those events. In applying our own values to those facts, I think we would all do well in being careful to, likewise, make a thorough effort to understand before we judge. Goldsmith’s insightful account is a great place to begin such a process.

3 thoughts on “Martin Goldsmith: The Inextinguishable Symphony – A True Story of Music and Love in Nazi Germany”